"A great danger is the activism of priests"

The head of one of France's most flourishing religious communities give his recipe for a happy, holy priesthood 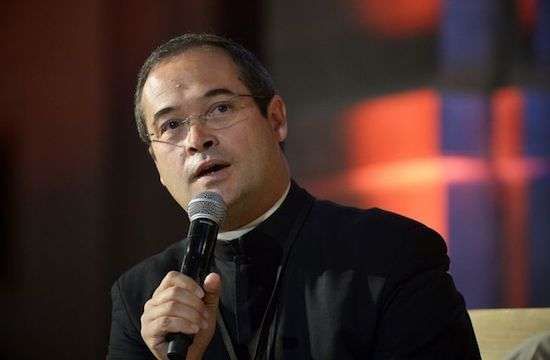 The Community of Saint Martin has come a long way in the nearly 45 years since its French founder started it in Italy with the help of one of the Church's most influential cardinals.

Father Jean François Guérin set up the community in 1976 in Genoa under patronage of its long-serving archbishop, Cardinal Giuseppe Siri.

But the conservative Italian cardinal, who had been a candidate at three different conclaves, died in 1989. Four years later Guérin moved his group to the town of Évron, located in the Diocese of Blois in central France.

And today the community is flourishing. It numbers 150 priests and deacons, 100 seminarians and about 20 who are doing a propaedeutic year. It is established in 30 dioceses in France and is also present in Italy, Cuba and Germany.

In an interview with La Croix's Clémence Houdaille, he spoke about the challenges the Church is facing today and how his community of priests is trying to respond to them.

La Croix: The Community of Saint Martin ordained 27 deacons in June, which means you'll have 27 new priests next year -- a substantial part of all priestly ordinations in France.

Father Paul Préaux: Such a figure is unique. We usually turn around about 20 admissions to the seminary each year, and a certain "weeding out" takes place throughout the years of formation.

We did not make a lot of noise about these ordinations because we do not want to be seen as if we were giving lessons to dioceses which have fewer. That represents a certain weight in terms of responsibility.

It is a mystery to me. I don't know why the Lord allows this.

I am not looking at the number of seminarians, but at the responsibility for us to form them well, and that they be happy in their priesthood.

We are also responding to a need in France, in about 30 dioceses today.

Twenty years ago, it was a community like that of the Brothers of St. John that had the wind in its sails and had many vocations. Today, the Brothers are in turmoil following revelations regarding its founder. Does this example play a role in your desire for discretion?

We use the lessons of history. I was elected moderator for Saint Martin at the same time that Father Thomas Joachim became superior of the Brothers of Saint John.

Moreover, I am very keen to work with the other communities, be it Emmanuel, Saint John, the New Way.... Let's stop being in our chapels, let's gather together in the nave! It is a question of ecclesiology.

What do those who enter the Community of Saint Martin come for? Is it the community aspect and the reassurance, as compared to a more solitary diocesan vocation?

Perhaps some come in search of comfort, peace or with a certain idea of perfection.

But community life is not at all restful, just like married life!

All ordained ministry is communitarian by nature, but the way we live it is specific, and requires discernment. Those who do not have the necessary dispositions to live this kind of life are told so.

For example, a young man just left us after several years in the seminary, realizing that he had come to seek a spiritual life, but not the priesthood.

You welcome seminarians who are sometimes very young into formation in a setting that can be a "cocoon" and seem disconnected from the parish life for which they are destined. How do you prepare them for their life as priests?

The propaedeutics who came this year are between 18 and 37 years old. Eighteen may seem young; I actually turned down four who were that age.

But the theory according to which one needs to stay in the world to mature, I don't make it an absolute.

I don't think that the world in itself helps someone to mature in their final choice.

Discernment is made to measure! There are several stages in formation, including a gap year in the parish, which is extremely important.

It is during this year that most departures occur because we go from a "cocoon" framework, even if I don't like this term, to a reality on the ground.

Besides this year, our seminarians have an outside apostolate, which is not only in the Catholic world, but in a food bank or voluntary service.

However, it is not this confrontation with the world that causes some to leave the seminary, but rather the fact that they have not felt the vocation to the priesthood, or that they do not want to live celibacy all their lives.

What are your concerns for your priests?

A great danger is the activism of priests. A priest who does not know how to rest tires others.

Today, a young priest can find himself in charge of a huge parish. The average age of our priests is 40. They are very caring. But the issue of burn-out is real. How are they going to hold up?

Isn't the answer in a greater assumption of responsibility by the laity, who are better trained, and in sharing leadership with them?

It is important to promote healthy co-responsibility.

The laity should not be locked up in the "ecclesial store", however, to make the Church work. Their mission is to be in the world.

Some lay people involved in parishes are exhausted and disillusioned, which leads to bitterness and abandonment. Others are disengaged or even consumers.

I hear the question of co-responsibility.

And it is true that there may be brothers among us who are more clerical than others, but it is more a question of fear and personal non-conversion than of formation.

I believe that we must not clericalize the laity, and we must not secularize the priests. One way of doing this is to remember our purpose. Are we seeking to evangelize, or to claim power?

So clericalism is not a problem?

There are certainly things to be improved in this regard, for we can all abuse power. It is a subject of daily conversion, at all levels of the scale, since we can all exert a hold on the freedom of the other.

"Evil is the impatience for what is good," wrote St. Cyprian, and St. Vincent de Paul said that "what is done without taking the time to do it well, does not stand the test of time".

Abuse of power is sometimes impatience.

One wants good for someone, but without respecting their path of progress.