A heart and a half: Mary McAleese president of Ireland 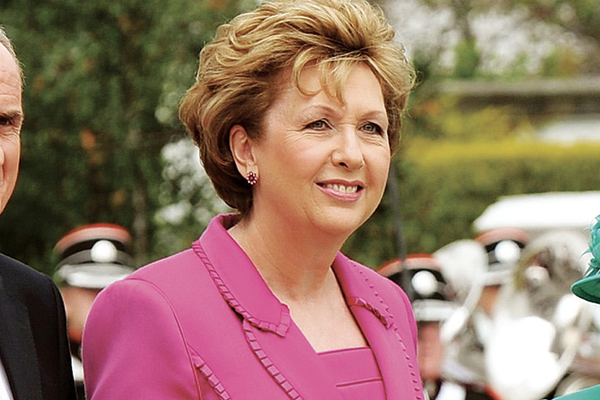 Mary McAleese was the second woman to become president of Ireland, following Mary Robinson. Both were admirable holders of the office; both brought judgement, grace and stature to the presidency. Both were lawyers, and both, perhaps, represented the last generation of Irish women who were commonly named Mary.


This Mary’s memoir takes us from tormented scenes in Belfast’s Ardoyne area to the presidential residence for Ireland’s “First Citizen”, and beyond. Among other achievements, she was the unique, historic host for Queen Elizabeth’s only state visit to the Irish Republic. She has held many esteemed positions in law, teaching and human rights. As a qualified canon lawyer, she is also known for her audacious feminist challenges to the Vatican hierarchy, including Pope Francis (whom she calls “all talk and no action”).

McAleese was born in 1951, an eldest child. Her mother had 11 pregnancies: nine children survived. After the last, a priest criticised a medically necessary hysterectomy, which may justifiably have contributed to McAleese’s subsequent sensibilities about misogynistic clerics. Her parents were conscientious, hard-working Catholics, but circumstances were modest. From early childhood until she ­married Martin McAleese at 24, Mary shared a bed with another sibling.
Her father, who ran a bar, had his premises blown up by both republicans and loyalists. The family was fortunately absent, marking the Feast of the Immaculate Conception, when loyalist terrorists brutally destroyed their home.
Belfast was divided along the usual sectarian lines and yet there were always kind Protestant neighbours, too, and her mission to “build bridges” was an early prompting. But it wasn’t all misery: there was a supportive extended family. And her mother fiercely defended McAleese’s ambition to study law at a time when not many Ardoyne girls did.

And so her ascent to academic success began, via Queen’s University Belfast, and Trinity College Dublin, where she followed Mary Robinson as a professor of law. There was a stint as a broadcast journalist, with RTE, the national broadcaster, where her experience with the Dublin media wasn’t ­felicitous. As a Catholic “Nordie”, she was patronisingly expected to be a republican nationalist. When she emerged as a ­presidential candidate in 1997, she was described as a potential “tribal bomb”. It was predicted she’d be an uber-Catholic and a Sinn Féin republican fellow traveller, which was not at all how things turned out.
She was easily elected, and moved to the presidential residency, Áras an Uachtaráin, with her husband Martin, and their three children. And she did build bridges there: even going so far as to invite the Revd Ian Paisley and his wife, Eileen (among others), to her official home. She also caused “apoplexy” – her word – among the Irish hierarchy by taking Communion in a Protestant cathedral in Dublin (there are two).

Successful in her first term, she was returned, unopposed, for a second period of seven years. After that, she embarked on canon law at Rome’s Pontifical Gregorian University. She was already critical of the Catholic Church for a number of reasons: child abuse, female priests, homosexual rights. Her canonical studies enhanced her radicalism, and even her anger.

The narrative covers an arc of our times, with a diligent eye to the record: events and encounters with numerous political and church people are described. She is caustic about those she considers bigoted, misogynistic, or who have failed in addressing child abuse. Mary Glendon, Fr Tom Williams, Cardinal Law, Dublin’s Cardinal Connell and Fr Denis Faul, are not spared her ire. She has her heroes too: Mo Mowlam, Cherie Blair, John Hume, Francis Campbell, the Dalai Lama, and Fr Alec Reid, to whom the book is dedicated (and she has heroes, too, within her own family). She describes the Vatican as a “rather camp medieval court”, which makes it sound rather glamorous. She’s incredibly proactive: if she has to master Italian, or church Latin, she just does it. She gained her doctorate with flying colours.

She has a pleasing line in self-deprecation, although she can occasionally take herself too seriously. She was furious with John Paul II for making a jest suggesting that Martin must be playing second fiddle to his wife. I heard my own husband banter on this theme with Denis Thatcher and it was thought harmless. But Mary elicited an apology!

There’s a happy photograph of her gay son, Justin, with his husband, and she makes mention of her and Martin’s energetic involvement in the 2016 Irish referendum to legalise same-sex marriage. There could have been a little more political and social context about that. Her influence was also considerable when it came to the 2018 repeal referendum (repealing the Eighth Amendment, which acknowledged the unborn child): she told a feminist interviewer that she supported repeal “with a heart and a half”. This came as a disappointment to pro-life supporters. She may have a more complex explanation of this ­situation, or she may feel so radically feminist now that she is aligned with the pro-choice movement, but it isn’t explored.

Yet, all in all, Mary McAleese’s story is an important witness to the times we have lived through.