A time to keep silence 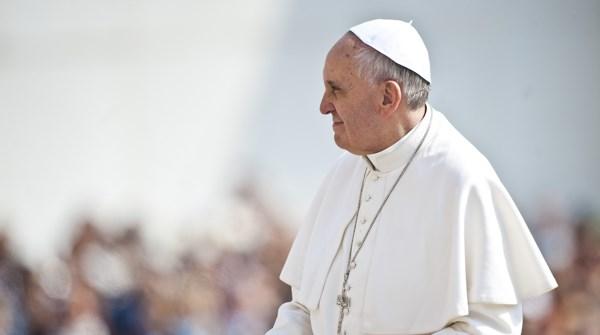 Pope Francis refused to answer reporters’ questions about a letter released on Sunday by Archbishop Carlo Maria Viganò, instead urging reporters to draw their own conclusions about the former papal nuncio’s accusations. Austen Ivereigh explains that the roots of Francis’ response might be found in an article that Jorge Mario Bergoglio wrote in 1990, in which he claims silence is sometimes the only way to let the spirits reveal themselves.

‘When it’s our turn to live through a difficult situation, sometimes it happens that silence is not a virtuous act but is the only option, one imposed by circumstances.’

‘Read the statement attentively and you make your own judgment. I will not say a single word about this.’

The first quotation is the opening of one of Jorge Mario Bergoglio’s most powerful Jesuit articles, ‘Silencio y Palabra’ (‘Silence and Word’), which he wrote during the first months of his ‘desert’ period in the Argentine city of Córdoba, in 1990.

The second is what he told journalists on Sunday 26 August during a 45-minute press conference in flight to Rome from Dublin. What he described as a ‘statement’ was an incendiary 11-page ‘Testimony’ released that morning, penned by a 77-year-old retired Vatican diplomat to the United States. Archbishop Carlo Maria Viganò’s purpose was made clear at its conclusion: to call for the pope to resign in disgrace on the grounds of complicity with sex-abuse cover-up.

It was not the first time Bergoglio had stayed silent faced with a ferocious accusation of complicity with evil. Back in the 1970s, during Argentina’s dictatorship, he was accused by left-wing Catholics, including some Jesuits, of collaborating with the military killing and torture of those deemed subversives.

The allegations resurfaced with vigour in the 1980s, and continued to be thrown at him right up to his election as pope. Yet they had long before then fallen away under scrutiny. Over time, stories emerged that prove not just his innocence of the charges of complicity but highlight his heroic assistance to victims of the dictatorship.

To stay silent when a ferocious accusation has been launched against you takes courage, because it only invites further pressure. This week, Francis’ refusal to answer charges that after his election in 2013 he ‘covered up’ the predatory behaviour of the Archbishop emeritus of Washington, Cardinal Theodore McCarrick, has inflamed social media. Just as before, the allegation is grave; and people demand to know the truth. Well, did he or didn’t he?

In the 1980s, the charge of complicity was made in a book by a respected Catholic human rights activist against the background of widespread shock and indignation at revelations of bishops’ failures to protect their flocks from the army’s torture chambers. The mood was ugly.

So, too, now, the accusations have emerged from a backdrop of anxiety and anger verging at times on hysteria. The man making the accusations was a senior Vatican official prior to his diplomatic appointment to Washington DC between 2012 and 2016.

The anger of Catholics in the United States and elsewhere is the result of revelations that in the 1980s-90s McCarrick seamlessly ascended the ecclesiastical career ladder while regularly suborning seminarians for sex. (Although not criminal acts — these were adults — they were not just violations of celibacy but clearly abusive, given the asymmetry of power.)

Then came two more shocking revelations. The first — something no one knew until very recently — was that McCarrick had also abused a minor. The second was the Pennsylvania grand jury report on the mishandling over many decades of clerical sex abuse. Although it showed (again) that abuse was rife in the 1970s-90s but drastically fell in the 2000s as a result of actions and sanctions, the heart-shattering details of depraved, often clearly demonic exploitation by priests of innocent young people, and the apparent indifference of bishops, have triggered widespread indignation and shame.

The result has been mounting frustration in America at what is widely perceived to be a global failure of church leadership, and a growing demand for bishops and the Vatican to be held to account. It was into this boiling cauldron that Viganò dropped his J’Accuse, claiming that he had told Francis about the McCarrick accusations back in 2013, and that the pope had ignored a prayer-and-penance sanction imposed on McCarrick by Benedict XVI.

Yet rather than answer NBC’s Anna Matranga’s question on the plane asking if these claims were true, Francis said the document spoke for itself and that journalists had enough ‘professional maturity’ to reach their own conclusions. Later, he said, ‘maybe I will say some more.’

Some commentators saw this as a ‘stalling tactic’; others said Francis was refusing to play ‘a game that's 2,000 years old’, in other words, to be drawn into the thickets and weeds of ecclesiastical intrigue. One commentary observed that rather than ‘accusing others and blameshifting,’ Francis ‘simply, in a very calm and dignified way, stimulated an objective and dispassionate investigation from third parties and entrusted himself to whatever the outcome may be, for he doesn’t fear truth, but rather is confident that truth will vindicate him.’

Bergoglio’s 1990 essay, ‘Silence and Word’, suggests a deeper spiritual purpose to his silence, one drawn from a meditation on the Passion in the Third Week of the Spiritual Exercises. There St Ignatius describes how in the Passion, God ‘goes into hiding’, concealing, as it were, his divinity.

This is a very different kind of silence from, say, the silence of complicity or the silence of inaction faced with evidence of evil, as we have seen too often in the case of sexual abuse of minors.

The purpose of Christ’s self-emptying silence — his meekness faced with ferocious hostility — is to create space for God to act. This kind of silence involves a deliberate choice not to respond with an intellectual or reasoned self-defence, which in a context of confusion, of claims and counter-claims and half-truths, simply fuels the cycle of hysterical accusation and counter-accusation. It is a spiritual strategy to force the spirits behind the attack to reveal themselves.

To ‘make space for God’ can only be done in the way that Jesus himself taught: through the kenosis (self-emptying) described in St Ignatius’s ‘third kind of humility’ (Spiritual Exercises§167): ‘I want and choose poverty with Christ poor rather than wealth, and humiliations with Christ humiliated rather than fame …’

The effect of this humility, Bergoglio notes in ‘Silence and Word’, is to provoke an increase in the ferocity, because people are attacked more when they are weak. (Thus, he points out, Jesus wasn’t ferociously attacked while he was seen as strong — when people followed him, and believed in him — but only after he had been ‘weakened’ in the sight of others by betrayal.)

Gradually, the rage will begin to focus on a single person. ‘At the root of all ferocious attack is the need for people to offload their own guilt and limitations’, notes Bergoglio, adding that Jesus, as a living reproach, is scapegoated: ‘all the evils are offloaded onto the person we are ferociously attacking’.

As Jesus is steadily weakened — the disciples flee, Peter denies him, and he is left alone on the Cross — the devil reveals himself, believing that he has won. Christ’s weakness is the bait he swallows. Bergoglio writes:

In moments of darkness and great tribulation, when the knots and the tangles cannot be untangled or straightened out, nor things be clarified, then we have to be silent. The meekness of silence will show us to be even weaker, and so it will be the devil who, emboldened, comes into the light, and shows us his true intentions, no longer disguised as an angel but unmasked.

In such circumstances, says Bergoglio — ‘in times of spiritual turbulence, when God wishes Himself to fight’ — our role is ‘to remain under the cloak of the Holy Mother of God’. Above all, one must resist the temptation to enter the ‘civil wars’ — las internas — because any excuse will be taken to see the other as enemy, to provoke a furious response, and to divide the world into good (us) and bad (them).

‘The work of salvation consists of affirming the choice that God has made of us in Christ, and to affirm it over any enmity,’ Bergoglio writes. It is this choice ‘to reaffirm the maternal presence of the Church in the figure of Mary following the Ascension of the Lord’ that allows us to live in the holy tension between the memory of the Cross and the promise of resurrection.

Could it be that behind Francis’ silence is not guilt or evasion, but hope?

Dr Austen Ivereigh is author of The Great Reformer: Francis and the making of a radical pope.