The rising number of adult catechumens living in increasingly “complex” matrimonial situations raises many questions for Catholic leaders. The Catholic Institute of Paris recently hosted a study day to examine the issues and seek ways forward. 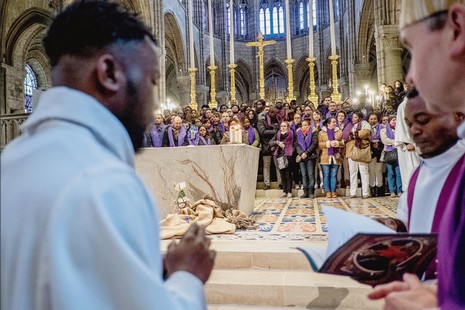 A celebration of the Call last March. Many catechumens who knock at the Church's door have no idea of its rules regarding marriage and living together. / Michael Bunel/Ciric

How to deal with the increasing number of adults requesting baptism, particularly those whose matrimonial life does not conform to Church rules?

Those who work with these catechumens well understand the suffering of people for whom baptism has been refused.

“A young woman who requested baptism was unable to receive it because she was married to a divorcee,” notes a catechumenate director from a diocese in south-east France.

“The worst thing was that her situation was discovered just before the decisive call. Now, she has joined an evangelical church,” the director laments.

The Catholic Institute of Paris decided to tackle the subject head-on at a study day last Tuesday addressing “canonical and pastoral approaches to the matrimonial situations” of catechumens.

Many catechumenate directors, who have all encountered this kind of difficulty, attended the event, looking for answers, or at least paths for reflection.

The task has become even more urgent since Pope Francis issued a call in his apostolic exhortation, Amoris Laetitia, for the Church to adopt a “welcoming”, “accompanying and “discerning” approach.

“I think that we need to be as welcoming as possible and accept the need to take the time to assist people rather than scrupulously applying rules,” comments Annick Van Styvendael, an interdiocesan delegate on catechumenate from the Savoy region.

Many catechumens, who are initially very distant from church practice and whose culture is often very different, approach the Church without the slightest idea of its rules regarding marriage or living together.

Even more frequently, they fail to see the link between these issues and their request for baptism, particularly when it is their partner who has “blocked” their entry into the Church.

People working with catechumens, who were initially enthusiastic can also become disoriented.

“There is a risk of moving from joy to fear and starting to anxiously examine matrimonial situations, like a customs officer,” warns Catherine Chevalier, leader of the catechumenate service for the Versailles diocese.

“By focusing on matrimonial situations and what happens ‘under the blankets’, people may tend to forget other social or political issues, which can also be incompatible with baptism,” adds Fr Cédric Burgun, vice-dean of the Faculty of Canon Law at the Catholic Institute, to spontaneous applause from the audience.

What responses can the institutional Church offer? Trying to determine the invalidity of a marriage may be an option. Nevertheless, Fr Burgun recognizes that “there are cases where baptism is not possible.”

“Some situations may appear to be insoluble for the present. Jesus himself was confronted by such cases,” he continues, referring to Christ’s conversation with the rich young man (Matthew 19, 16-22).

Juridical responses are also not always the most appropriate. To avoid setbacks, Fr Laurent Tournier insists on a period of pre-catechumenate for an initial familiarization with the Catholic faith.

Citing the Vatican II decree Ad Gentes ,he says that conversion needs to result in “a progressive change in mentality and habits".

“People are placed before difficult choices which may include a radical change of life,” he says. “Some situations can be resolved before people begin the catechumenate."

Others will progressively resolve themselves as people come to understand the demands of the Gospel.

In line with Amoris Laetitia and the desire for “merciful and encouraging pastoral attention", catechumenate teams are also seeking to go beyond the rigidities of a legalistic approach.

“It would be too easy to look for binary yes-no answers,” emphasizes Fr Laurent Tournier.

“The pope has asked us first to accompany and to establish a relationship of confidence with people and then to see how far we are able to go."