After 'taking a knee', bishop gets call from pope 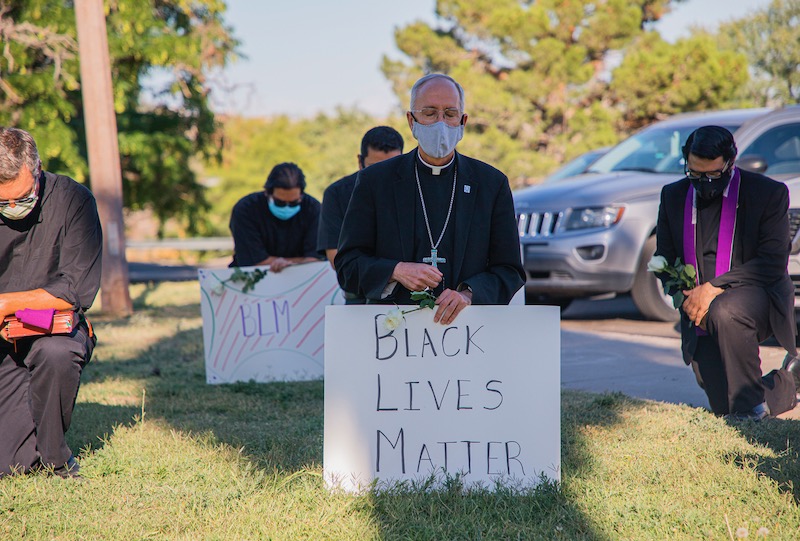 It's called “taking a knee”, and many professional athletes around the country have made the gesture publicly to protest police brutality.

Lately, even police officers showing solidarity have kneeled around the country before those protesting the killing of George Floyd, who died after being filmed pinned to the ground with a knee to his neck, constrained by a police officer in Minneapolis.

Until June 1, no Catholic bishop had publicly participated in the gesture but that day, Bishop Mark Seitz of El Paso, Texas, became the first.

Surrounded by priests from his diocese who also kneeled with him and holding a “Black Lives Matter” sign, he put both knees on the grass at El Paso's Memorial Park, where a protest had taken place a day earlier and closed his eyes.

“Oh, yeah,” he told Catholic News Service. “It's difficult to know what a bishop should do. But I've had some excellent advisers, people and priests. I tried to listen to them, listened to my heart. Sometimes, you just have to take the leap into the unknown.”

The photo of him kneeling went around the world via Twitter and ended up on an Italian website for the Diocese of Rome. Perhaps it was there that his boss, Pope Francis, saw it.

On June 3, shortly after the bishop finished with his daily Mass in El Paso, the pontiff gave him a ring.

“The Holy Father said that he wanted to congratulate me for the words I am saying. He also called Archbishop (Jose H.) Gomez (of Los Angeles),” Bishop Seitz said, recalling the phone call. “I told him I felt it was very important at this time to show our solidarity to those who are suffering. I told him I had just come from Mass at which I was praying for him and I always do. He thanked me and said that whenever we celebrate Mass, we are praying together, he where he is and me at the border. I told him that I am very honoured to serve here.”

The phone calls to prelates in the US shows “that the Holy Father is aware of what's happening in this country and is anxious for the church to be responsive in a pastoral way to participate in the response, in solidarity with those who have experienced racial discrimination,” he said.

In a public statement released June 4 on the killing of Floyd, he reflected of an image he saw on video of a young white woman at a protest near the White House who put her body in front of a young kneeling black teenager as police officers in riot gear approached.

As Jesus said, “No one has greater love than this, to lay down one's life for one's friends,” he wrote. “It's a scene of solidarity and self-giving that has played out across the country so many times in the last week. Here in El Paso there were two young police officers who knelt down with protesters here during our protest and it helped diffuse some tension. There is something profoundly eucharistic about that and I'm so inspired by our young people. They are teaching us something.”

Last year, Bishop Seitz wrote a pastoral letter on racism, weeks after the shooting at a Walmart in El Paso, a violent and bloody event that authorities believe targeted Latinos.

Up until the pandemic, he regularly visited survivors of the shooting in the hospital and ministered to families who lost loved ones in the event he calls “la matanza”, which means “the slaughter” in Spanish.

Guillermo Garcia, 36, the last patient in the hospital because of the mass shooting, someone whom Bishop Seitz visited, died April 27, bringing the death toll of the deadly incident to 23.

“That matanza, that event opened my eyes to the presence of people whose thought patterns are very influenced by racially prejudicial ways of thinking and that it's not just a benign kind of problem in our country but a problem that can lead to death,” he told CNS. “So, it gave me a new sense of this, that this isn't an abstract kind of issue. It' s an issue that has a tremendous impact on people's lives. And it's not just physical harm that comes to them but also to the ability of their potential.”

He said that for people to reach their potential as God intended, they also need to be seen as God sees them, but when others look at them with distrust, without the goodness that God sees in them, it's also hard for the person to see him or herself that way and “I think that's one of the subtle but extremely important ways that this systematic prejudice influences people,” he said. So, he felt it was important to show solidarity.

“The pope, from day one, has called the church to be a field hospital. If there were ever a time, with COVID and the killing of George Floyd, for the church to be there in solidarity and support of people, this is it,” he said. “We need to show our love and compassion and respond to the call to peaceful actions, giving them the support they need. Action can be strong for fundamental things ... to be looked at and changed.”

When he kneeled, when he took part in “taking a knee” it was taking part in what he said was something akin to the liturgy.

“I taught liturgy in seminary. In good liturgy, our faith is brought to life. I think what we've seen play out over the last couple days is maybe a little bit like liturgy,” he said in his statement.

“I think that sometimes we can fall into the trap of thinking that Christianity is a dead letter religion. That it's about things that happened a long time ago or about words on a page. But every day at Mass, when I kneel before Jesus in the Eucharist, I'm reminded that he is alive and present. That Christianity is an event happening right now. The drama of salvation is something playing out every day. And we all have a role to play.”