Anglicans recognise Pope as 'father of the Church' says Archbishop

Archbishop Welby said he believed that most Anglicans in England now recognise the Pope as “the father of the Church in the West”. 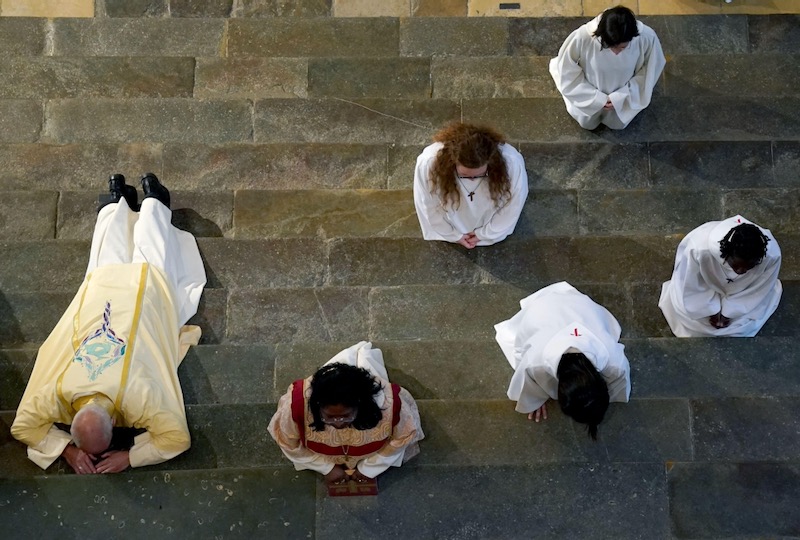 Archbishop of Canterbury Justin Welby prostrate on the steps of Canterbury Cathedral at the start of the Lambeth Conference.
PA/Alamy

The world’s Churches require a fresh impetus to escape the present “ecumenical winter”, the Archbishop of Canterbury said yesterday, as he admitted that he is “not proud” of the progress on Christian unity over the past nine years.

Speaking ahead of the Lambeth Conference’s day on the environment and sustainability, Archbishop Justin Welby said that “habits of separation” had become engrained over the past five hundred years.

However, he added that he believed that most Anglicans in England now recognise the Pope as “the father of the Church in the West”.

The day included the presentation and discussion of the “call on environment and sustainability” and a symbolic tree-planting liturgy to initiate the Anglican Communion Forest, an initiative by which each bishop commits to care for the environment in their diocese.

The Archbishop of Cape Town, Thabo Makgoba, told The Tablet that joint initiatives on the environment were “priceless” in fostering stronger relations between Churches.

“If we don’t agree on sacramental doctrine,” he said, “we can agree on the physical manifestation of doctrine, and on our duty to protect God’s Creation and God’s People.”

He also said that it was a vital channel for inter-faith dialogue, but he was more sanguine about the possibility of the Anglican Communion taking more “practical” direction to overcome its differences on doctrine – which were powerfully evident earlier this week in the discussion of the controversial “call on human dignity”. He said that the session was “significant for accepting a plurality of views” but observed that “practical measures are the implication of doctrine”.

“Our care for the environment is rooted in the doctrine of creation, but that is also the root of the disagreements on the doctrine of marriage,” he said. The Catholic Archbishop of Birmingham, Bernard Longley, who is attending the conference as co-chair of the Anglican-Roman Catholic International Commission, told The Tablet that his attendance at the conference helped him to appreciate the Anglican position in ecumenical discussions.

Responding to Archbishop Welby’s comments on the limited progress of ecumenism, Archbishop Longley said that it was more important that the conference seemed to have secured the unity of the Anglican Communion.

“From a Catholic perspective, we deal with other Churches at the universal level,” he said. “If the Communion were to divide, we would have to find new partners for dialogue, and that would significantly hamper the process.”

On his first experience of a Lambeth Conference, Archbishop Longley said that it gave him a sense of the scale and diversity of the Anglican Communion. He was particularly struck by the contribution of the South Sudanese bishops “who are tending to their people in the midst of war”. Archbishop Welby had earlier confirmed that he still hoped to visit South Sudan with Pope Francis when the latter’s health allowed, and said that an element of the trip would address the effects of climate change on the country.