Benedict’s runaway court: is there one Pope too many? 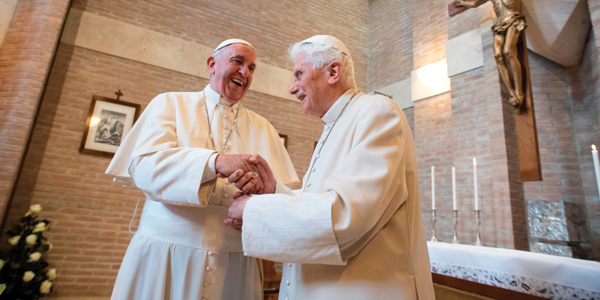 Six years on, how is that most startling of contemporary Catholic novelties, the emeritus pontificate, working out? Does it help or hinder the Petrine ministry? What can be learned from the experience? Not since Francis dialled his predecessor on the night of his election have these questions gone away. From Castel Gandolfo, Benedict, clutching his cordless phone, pledged his total obedience and prayer, and he has been as good as his word, never contradicting Francis, cutting short those who come to him to complain and always being available to his successor with advice and support.

The same cannot, however, be said of the courtiers who live with or visit him at the Mater Ecclesiae convent up the hill from Francis in the Casa Santa Marta. As Benedict, who turned 92 a few weeks ago, has grown ever more frail, the courtiers have grown bolder in fostering around him a reactionary alternative to Francis, a “hermeneutic of rupture” that is in turn being exploited by the far-right nationalist-populists in their campaign to turn conservative Catholics against Francis.

At the heart of the Ratzinger court are two Germans who are very close to each other: Benedict’s longtime personal secretary and inseparable companion, Archbishop Georg Gänswein, and Cardinal Gerhard Müller. Ever since Francis removed him as prefect of the Congregation for the Doctrine of the Faith in 2017, the day after his five-year term ended, Müller – someone close to the liberation theologian Gustavo Gutiérrez, who had always seemed torn in his loyalties – has emerged as the heavyweight flagship of the opposition to Francis. He and Gänswein are in turn close to Cardinal Walter Brandmüller, one of the two remaining authors of the so-called dubia letter of 2016 protesting Francis’ opening of Communion to the divorced.

Fanning out from the Mater Ecclesiae is a broader “Regensburg network”, as it is sometimes called, which also includes the “Bishop of Bling”, Franz-Peter Tebartz-van Elst, the former Bishop of Limburg whom Francis moved to Rome in 2015 following a scandal over his $43m home improvement project. What most of this network’s members have in common is a love of traditionalist liturgy, a devotion to Benedict and his papacy, sympathy for right-wing causes, and a resentment of Francis expressed in theatrical concern for “confusion” in the Church. They can often be found in the Rome salons of “Princess TNT”, the Bavarian traditionalist and philanthropist Gloria von Thurn und Taxis, rubbing shoulders with the other living dubia cardinal, Raymond Burke, and – when he is in Rome – Steve Bannon, Donald Trump’s former strategist. Bannon, a fierce critic of Francis, is funding a school for nationalist-populist leaders to be run by the Dignitatis Humanae Institute – president of the board of advisers: one Raymond Burke – out of a disused monastery an hour from Rome.

The close relations between the courtiers around Benedict and the right-wing Catholic media in the US came into the spotlight in April, after Benedict’s essay on the clerical sexual abuse crisis was fed exclusively to the EWTN constellation of media (which includes the National Catholic Register and the Catholic News Agency) under embargo. Benedict wrote his 6,000-word “Reflections” at the end of last year, some time after Francis announced a global meeting of the heads of bishops’ conferences to take place in Rome in late February. The essay, which Benedict described as “some notes by which I might contribute one or two remarks to assist in this difficult hour”, was sent at that time (early February) to both the Pope and the secretary of state, Cardinal Pietro Parolin.

Whatever Parolin and the Pope made of it – Francis certainly read it at the time – they did nothing with it, doubtless in part out of respect for the Pope Emeritus himself. The essay made some acute observations and was more subtle than most media commentary (“Benedict XVI blames sex abuse on swinging Sixties”) made it out to be. But the wince-inducing asides and rambling simplifications revealed how far he had aged. Anyone caring for Joseph Ratzinger’s reputation for supple, soaring theology would have kept it firmly in a drawer.

The Holy See press office had no idea Benedict’s courtiers had released his essay to EWTN. Favourable commentary was arranged to frame it as an important teaching moment: Cardinals Müller and Burke and Archbishop Charles Chaput of Philadelphia among others asserted that Benedict had dared to tell the “truth” about the sexual abuse crisis: the problem was not priests exploiting their power, but homosexuality and doctrinal disobedience. Müller even declared that Benedict’s contribution was “far more intelligent” than anything said at the February summit. That spin in turn provoked fury from theologians and commentators accusing Benedict of undermining Francis and the abuse summit, and of caricaturing post-Vatican II theology; Müller et al riposted that Benedict was being “silenced” for “daring to tell the truth”. Journalists filed stories of “duelling popes” and “fractures” between the Santa Marta and the Mater Ecclesiae. As a Washington Post headline put it: “Pope Benedict, in retired seclusion, looms in the opposition to Pope Francis”.

But it is more accurate to say that Benedict is being used by that opposition. Even though his text was spun as supporting the call by retired nuncio to the US Archbishop Carlo Maria Viganò for a purge of liberals and gays, it seemed directly to contradict that call. “The idea of a better Church, created by ourselves, is in fact a proposal of the devil,” the Pope Emeritus warned. Where Francis and his advisers on sexual abuse have focused on the exploitation and eroticisation of clerical power, Benedict’s courtiers seize on the scandals as an opportunity to highlight what they argue to be a post-1960s crisis in the Church of doctrinal sloppiness and homosexual laxity. It is because they are so keen on the Viganò narrative that the courtiers wanted Benedict’s essay out on the ultra-conservative US media networks.

These shenanigans in turn raise questions about the role of the Ratzinger court in the design of the emeritus papacy. Benedict told a German journalist in 2014 that before resigning he had wanted to be “Father Benedict” not “the Pope Emeritus”, but had been “too weak at that point to enforce it”. It was Gänswein who in 2013 had urged Benedict, in spite of his protests, to dress in white, live in the Vatican and be referred to as “His Holiness”. During a book presentation in May 2016, Gänswein explained that Benedict occupied an “expanded Petrine office” that now consisted of a contemplative member and an active member.

In this Ausnahmepontifikat, or “exceptional pontificate”, Gänswein appeared to suggest that one pope was no longer enough, that the teaching authority of the papacy was in some way divisible, and that action and contemplation could somehow be separated. His bizarre notion received short shrift from theologians and canon lawyers, and was gently put down by Francis, a contemplative in action if ever there was one. Benedict, he told journalists, was like a wise grandfather, “the man who protects my back with his prayer”.

Those who have seen them together say the personal relationship between the Pope and his predecessor is genuinely affectionate. Francis’ old friend and former pupil, Jorge Milia, said listening to Francis talk of Benedict he was reminded of the joy of two old classmates, one who had been some years ahead of the other, meeting up after many years. Certainly they meet often, far more than people realise, and Francis enjoys bouncing ideas off his predecessor, whose judgement and perspicacity he deeply respects. In a preface to a 2016 biography of Benedict by Elio Guerriero, Francis said he appreciated their “friendly spiritual closeness, the joy of praying together, sincere brotherhood, understanding and friendship, and also his availability for advice”. Benedict has spoken often of his affection and admiration for Francis, praising his “extraordinary human availability” and the warmth of his visits, gifts and personal letters. “The human kindness with which he treats me is a particular grace of this last phase of my life for which I can only be grateful,” he told Guerriero.

Although Benedict in 2013 had spoken of wanting to lead a hidden life, the following year he and Francis talked through his role, and agreed he should not hide away as a claustrato but get out and play a part in the life of the Church. Francis has often insisted to journalists that Benedict is “not a museum”. But what kind of role should that be? Certainly, the way his followers and close advisers weaponise his writings to promote criticism of the papacy is hard to reconcile with Francis and Benedict’s view of the emeritus pontificate as a gift, one that “expresses in a particularly clear way the continuity of the Petrine ministry, without interruption, like links in a single chain forged by love”, as Francis put it in the Guerriero preface. Benedict has personally made efforts to stress that continuity. “From the theological point of view,” Benedict told the German newspaper Bild in 2014, “we are perfectly in agreement.” He rejects attempts by conservatives to counterpose Benedict’s love of truth with Francis’ emphasis on mercy, noting how Francis is “totally in agreement” with the view that “it is mercy that moves us toward God, while justice frightens us before Him”, as he put it in the introduction to a book published in 2016. Francis, in turn, constantly quotes Benedict’s famous line in Deus Caritas Est – in turn borrowed from the founder of Comunione e Liberazione, Luigi Giussani – that Christianity begins not with an idea but with the encounter with the person of Jesus Christ.

That is not to ignore the obvious discontinuities, especially in matters of governance, which the Pope Emeritus has touchingly admitted to be his weakness. (A Vatican joke runs: Does Benedict interfere these days with the running of the Church? Answer: Are you kidding? He didn’t interfere when he was still Pope!) As the activities of his runaway court show, Benedict’s weakness is in managing people.

Yet whatever the antics of his courtiers, the long view is that the two pontificates remain closely intertwined. It was Benedict who gave permission for and opened the Latin American church meeting at Aparecida in 2007 at which the Cardinal Archbishop of Buenos Aires played such a key role, and Benedict who, anticipating a Latin American pope, stepped down to trigger the conclave of March 2013. Francis, who has spoken often of honouring that precedent, cannot consider resigning until he has buried his predecessor. Ironically, given his supporters’ attempts to use him to undermine Francis, it is Benedict’s  continued presence in the Mater Ecclesiae convent that guarantees that Francis will continue to reform the Church from the Casa Santa Marta.

But that doesn’t stop questions being asked about the need to reform the emeritus papacy. Catholics might have grown used to the idea of “two popes in the Vatican”, but the sight of Francis and Benedict together, both in white, still startles, as if one is seeing double. Is it because, when Jesus appointed Peter as his vicar on earth, he named a single figure standing for unity? In which case, what can be done to prevent that unity in future from being undermined? Those close to Pope Francis cheerfully suggest that reform will happen if or when Francis chooses to stand down. He will not wear white, will not be called “His Holiness”, and his title will not be “Pope Emeritus” but “Bishop Emeritus of Rome”. He may not even stay in Rome, but return to Buenos Aires, to occupy that room on Condarco they were keeping for him.

And one thing you can be sure of: he won’t have a court.

Austen Ivereigh is the author of The Great Reformer: Francis and the Making of a Radical Pope. His new book, Wounded Shepherd: Pope Francis and His Struggle to Reform the Catholic Church, will be published in November.