Beyond the politics of Communion

Biden and the bishops 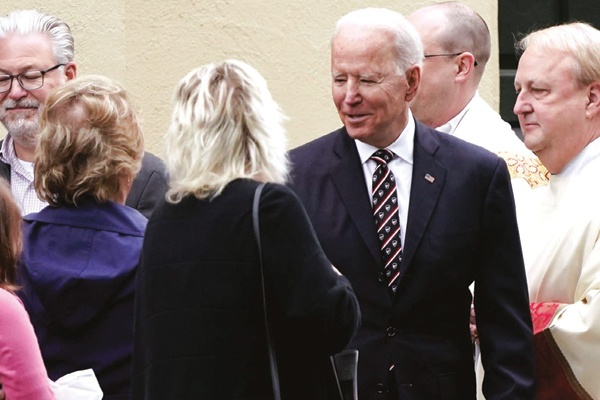 The US bishops’ decision to draw up a document expected to disapprove of allowing Joe Biden to receive the sacraments is seen by some as an attack on a Democrat President. But a theologian argues that behind it is an attempt to address a crisis of eucharistic faith in American Catholicism

The data came out from Pew in August of 2019. And the story it had to tell left many senior American Catholics astonished and horrified. According to polling data, seven in 10 US Catholics believe the bread and wine consecrated in Mass are mere symbols of Jesus’ body and blood.

Given the Second Vatican Council’s teaching that the Eucharist is “the source and summit of the Christian life”, the yawning gap between the teaching of the Church and the beliefs of the faithful was recognised as a disaster. Some have seen it as a sign of hope that only two of those seven knew the Church’s teaching and rejected it; according to the poll, more than four of those seven actually think the Church teaches that the consecrated bread and wine serve as a mere symbol of the presence of Christ in the sacrament.

During the meeting of the United States conference of Catholic bishops (USCCB) that ended last Friday, Bishop Andrew Cozzens noted that the Pew data, along with the removal of so many Catholics from the transformative encounter with the Real Presence of Christ in the Eucharist during the pandemic, had sparked the idea of a “eucharistic revival”. He said that planning for this initiative had been going on for more than a year.

Though there was a lot of media focus on the bishops voting to establish a committee to draft yet another teaching document, I was struck by just how much doing is being proposed. A multi-year project will involve listening sessions with Catholics who do not believe in the Real Presence, outreach to a variety of local dioceses and parishes (with a focus on different ethnic and cultural ­eucharistic traditions), and even “a spiritual renewal of eucharistic faith in our own hearts as bishops”.

Self-critique was an important feature of the meeting. There was a lot of debate, for instance, about whether the proposed teaching document should focus on “eucharistic coherence”, including what kind of unity with the Church is required to take Communion. Critics of the plan argued that choosing to do this now would look like a partisan attack by the US bishops on President Biden and Catholic Democrats. Rarely, if ever, do the US bishops focus on this topic when Catholic Republicans stray from central truths taught by the Church. Although several bishops said that the proposal to draft a document “on the meaning of the Eucharist in the life of the Church” was not about Joe Biden, and the chairman of the USCCB’s doctrine committee, Bishop Kevin Rhoades, said the proposed document would not mention individuals by name, more than one bishop arguing in support of the document brought up Biden. And Students for Life organised anti-Biden rallies to coincide with the meeting.

Cozzens, in an interview with The Pillar, a website and podcast founded by two former Eternal Word Television Network journalists, offered more detail about how the idea of a “eucharistic revival” was already under way before June 2020, when Bishop Robert Barron had been going to present a proposal to his fellow bishops. Cozzens is now leading this effort (after Barron stepped down from chair of the committee on evangelisation and catechesis). He said that he would not be focusing at all on President Biden.

Though the US bishops have declared that abortion is the pre-eminent justice issue of our time, Bishop Rhoades says that their docu­ment on the Eucharist would also focus on the issues of white supremacy and human trafficking. Bishop Jaime Soto also insisted that it should teach about the strong relationship between eucharistic coherence and the work the Church does with migrants. I agree with the bishops that prenatal justice is the pre-eminent justice issue of our time, but I would add to the scandals of white supremacy, human trafficking and the treatment of migrants and refugees the gravely evil acts of usury which ravage the economically vulnerable in the US and around the world.

If these kinds of issues are highlighted along with abortion, then those who have been pushing against the bishops’ initiative because it will inevitably be seen as a politically partisan hit job will have offered an immeasurably important service to the project. A more coherent eucharistic revival might engage some Catholics who would otherwise dismiss it as cover for a partisan attack on Democrats.

But the hoped-for revival will only be successful if, as the theologian Holly Taylor Coolman of Providence College in Rhode Island put it recently, we really believe and act as if the Eucharist is “the most sacred and most intimate act in which Christians engage”. She suggests that we think about our other practices with regard to sacred and intimate acts. You don’t show up for a funeral in a swimsuit. You don’t have sex with your spouse on the front lawn. Same with the Eucharist—but on a much, much higher level. St Paul tells us that “whoever eats the bread or drinks the cup of the Lord in an unworthy manner will be guilty of sinning against the body and blood of the Lord”.

To see how sin impacts one’s worthiness – and to grasp that, as Pope Francis says in Evangelii Gaudium, the Eucharist “is not a prize for the perfect, but a generous medicine and food for the weak” – takes formation with regard to the sacraments which does not happen overnight. Because the Church has done such a poor job of forming US Catholics over the past few decades, critics of this process are right to worry that returning to an emphasis on repenting of mortal sin before receiving Communion will alienate many people. But as Bishop Donald DeGrood said at the bishops’ meeting: the scandal has already happened.

As the poll conducted by Pew tells us, the damage is done. What we can do now is steel our spine, take the short-term hit and keep focused on the longer-term goal of reviving the kind of eucharistic devotion that is present in countries where the Church is flourishing, particularly in Africa and Asia. The Church in the US is blessed with many immigrants who have brought their galvanised eucharistic practices with them – and also by young ­people eager to engage in traditional practices such as Adoration and Benediction. So there are significant reasons for hope.

If we can put aside idolatrous distractions (especially those related to secular politics), and keep focused on Christ, God’s grace can and will transform the US Church through the Eucharist: the source and summit of the Christian life.

Charles C. Camosy is associate professor of theological and social ethics at Fordham University. He is the author of Resisting Throwaway Culture: How a Consistent Life Ethic Can Unite a Fractured People. Losing Our Dignity: How Secularized Medicine is Undermining Fundamental Human Equality is published next month by New City Press.