Bishops call for 'Christian hospitality' along the Camino de Santiago

Mélinée Le Priol - La Croix International - Tue, Aug 8th 2017
Of the 278,000 people who traveled the ancient Roman Catholic pilgrims route in the north of Spain in 2016 only about a third did it "strictly for religious reasons". Attempting to re-conquer this "de-christianized" domain has become a major concern of the Church. 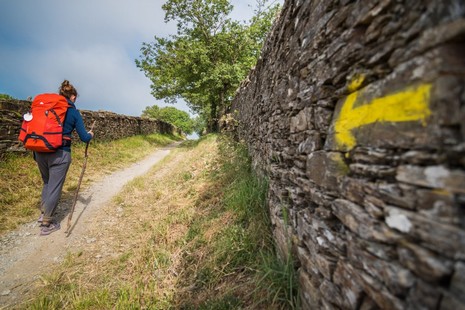 A pilgrim on a marked section of the Camino path in Galicia, Spain, on May 15, 2015. / Philippe Glorieux /CIRIC

In a pastoral letter published on July 12, French and Spanish bishops from the dioceses along the Camino de Santiago, also known as the Way of St James, have called on people to extend welcome and offer hospitality along the whole length of the trail.

Around 278,000 pilgrims traveled the Camino to the city of Santiago de Compostela along various routes in 2016, an eighty-fold increase over the last thirty years since the incredible renewal of what the regulars call the “Way".

Of these walkers, “barely more than a third say they have done it strictly for religious reasons", says historian Philippe Martin.

“Attempting to re-conquer this de-christianized domain has become a major concern of the Church since the first decade of this century,” he adds.

The bishops’ pastoral letters form part of an attempt to “re-spiritualize” the journey and turn it into one of “evangelization".

On July 12, the French and Spanish bishops of the Way of St James released a new letter.

This came exactly two years after the release of the first letter, which described the pilgrimage as a “promising religious phenomenon".

The twenty-page document addresses the issue of hospitality along the routes while trying to answer the question of how “Christian hospitality” differs from simple “hospitality".

The bishops first trace the history of this Christian tradition from its roots in the Gospel, including Zacchaeus’ invitation to Jesus as well as the fact that “God asked a young Virgin from Nazareth for hospitality for his Son, Jesus".

The bishops invite the “Christian hosts” of the 21st century, who are responsible for the reception of pilgrims walking towards Santiago de Compostela, to make every effort to facilitate guests’ access to the spiritual aspect.

For example, they are asked to have crucifixes, Bibles, and pictures of St James or of Mary in their hostels as well as to hold novenas is various languages and times in the accommodation they provide.

“If there is a church near the place of lodging, may it serve as a place for prayer,” the bishops advise.

“The Christian host, with the help of the local parishioners and in agreement with the parish priest, will be responsible for ensuring that the church is open at the necessary hours and will invite their guests to go there for contemplation and meditation,” the latest letter says.

The letter also adds that, since monasteries and presbyteries offer the most visible Christian hospitality, “this needs to be expanded and should receive particular assistance.”

Witnesses to their own faith

Aside from the practical advice to be given to the pilgrims of St James regarding office and mass times, “Christian hosts” are also called to be witnesses to their personal faith in an explicit manner.

“The host will need to be able to answer a variety of questions concerning the foundations of their faith,” say the bishops.

“Serious reflection on each paragraph of the Credo and the Lord’s prayer should be done,” alongside reflections on the Church, religion and morality.

Who is God? Do you believe in God and why?

Who is St James? Is he buried at Compostela? Why? What do the different representations of the apostle mean?

These are among the questions for reflection proposed by the bishops.

Finally, “Christians hosts” are invited to welcome everyone, without distinction, in an open, fraternal and joyful manner.

“The host will see Christ and the work of our Creator in each pilgrim who knocks on their door, and they will welcome them into their home,” the bishops write.