'Bless me Father, for I have sinned': Confession in a modern world

'Bless me Father, for I have sinned': Confession in a modern world 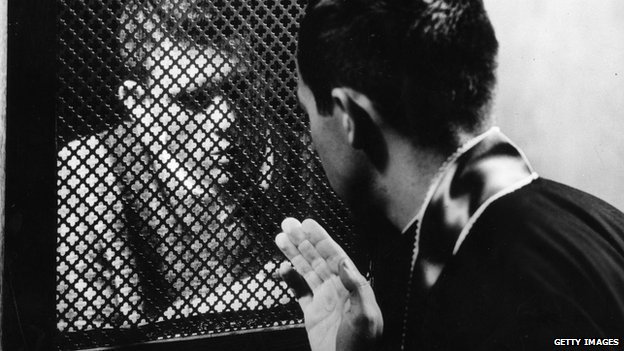 "Bless me Father, for I have sinned." It is more than forty years since I first spoke those words, aged seven, in the dark space of a Catholic confessional. I knew who I was speaking to: it was the parish priest sitting behind the iron grill. I am sure he knew who I was, but I was happy to keep up the pretence of anonymity.

I have often wondered how bored he must have been listening to a succession of primary school children reciting their shortcomings about not helping with the washing up at home and stealing Penguin biscuits from Johnny Cox's lunch box at school.

Like most modern Catholics in the West, I have let this practice of the church

wither on the vine. It's estimated that only two per cent of American Catholics confess with any regularity and in western European countries they have simply stopped keeping records.

Heart and Soul will be broadcast on the BBC World Service on Saturday 15 March at 03:32 GMT.

This is far from what the Church

would want. Canon Law states that penitents in a state of "grave" or "mortal" sin for acts like murder, abortion and adultery, must confess as a condition of being allowed to receive Holy Communion. Even for less grave offences, so called "venial" sins, regular confession, especially in the present season of Lent, is encouraged.

A reminder of mortality

Most non-Catholics, of course, have no experience of all this. Their exposure to this strange practice is limited to gripping scenes in such cinematic classics such as Alfred Hitchcock's 1953 classic I Confess, or Roland Joffe's 1986 epic, The Mission. Yet there is reason to believe that the curiosity around confession never goes away. 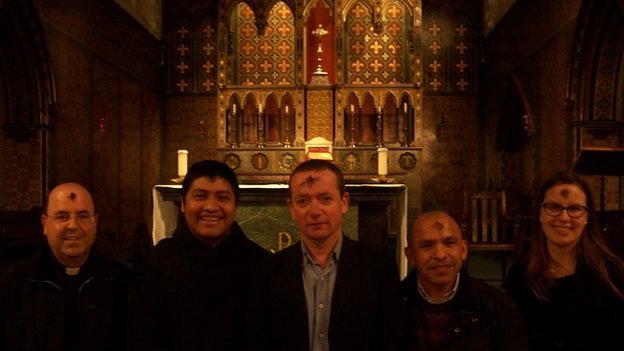 Pope Francis, who this week completed his first full year on the throne of St Peter, has spoken candidly of his own shortcomings as a sinner and many Catholics are responding to his call to make regular examination of conscience. At the beginning of Lent, Catholics receive

ashes on their foreheads as a reminder of their mortality and the call to turn back again to God.

The priest is not there to judge you. But when he gives you absolution, I know when I hear those words that I am forgiven by God”

Accompanying the Latin American community at the church

of St Anna in south London, I asked Antonieta Boccardo from Venezuela, why she thought the mediation of a priest was essential. Why couldn't she just sit in a quiet room and talk to God and express her remorse?

We are human beings who use speech and language, she says, when we are trying to be deep and vulnerable.

"The priest is not there to judge you. But when he gives you absolution, I know when I hear those words that I am forgiven by God."

Similar sentiments were shared with me by Alonso Andino, from Ecuador: "I go every week without fail. It is such a weight off my shoulders to try and make an honest assessment of my life and to know that through God's mercy, I am forgiven. It is a most beautiful thing."

More sceptical voices are not so sure. They make the charge that confession actually encourages repetition of these shortcomings as penitents can get their slate wiped clean and start all over again.

However, this is to miss the point. Catholics must make what is known as a "firm purpose of amendment."

How many of us have witnessed this scene? A small child lashes out at another child and an observing adult leaps in, saying, "Say sorry to Michael." Offending child, with not a hint of remorse simply repeats the required formula, "sorry Michael." And Michael is not convinced! There has been no "firm purpose of amendment".

For real forgiveness, genuine contrition is required, not just a vacuous recital of lists and a genuine determination to avoid a repeat. And this is tough.

"Give me the heart of stone within you," says God in the book of Ezekiel, "And I will give you a heart of flesh." The conversion of the human heart requires a kind of brokenness, a re-making of ourselves and this is not a space that many of us want to venture into. 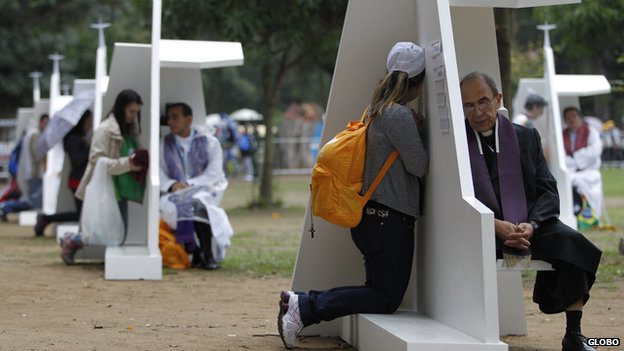 But what happens when the Church

states that something is sinful and the person confessing, after examination of conscience, genuinely believes there is nothing to confess?

For example, it is estimated that 95% or more of Catholics practice contraception in spite of the Church's 1968 teaching

in the papal document, Humanae Vitae, that artificial birth control is against God's law. What are they meant to do?

Fr Stephen Wang, senior chaplain at the University of London, says it's a situation that rarely presents itself in the confessional. If someone does not believe they have sinned, they won't raise it.

The sacramental seal is inviolable. Accordingly, it is absolutely wrong for a confessor in any way to betray the penitent, for any reason whatsoever, whether by word or in any other fashion”

"But if they raise it", says Fr Wang, "It suggests a grey area, a part of their life they may be troubled by and are seeking guidance on in this trusted space. You have to recognise it is a person struggling with it, but if a person, after discussion, says that they can't accept it, I'd simply say, 'OK, I accept that's where you are at the moment and I'll pray for you and ask you to keep thinking about it.'" But, he stresses, it's not a question of fudging the Church's teaching

Confession and the law

In a 2003 affidavit, he admitted having made confession about his paedophile activities to more than 30 different priests over a 25-year period before he was finally imprisoned for six years.

Why did these priests not go to the police and denounce him? This is often very hard for non-believers to accept, but the clergy are bound to total and absolute confidentiality in the private space that is the confessional.

Canon Law 983 article 1 states it clearly: "The sacramental seal is inviolable. Accordingly, it is absolutely wrong for a confessor in any way to betray the penitent, for any reason whatsoever, whether by word or in any other fashion."

Such is the seriousness of breaking the seal that the Church

reserves the right to excommunicate a priest, which means he ceases to be able to practice as a minister and can no longer participate in the life of the Church.

Cornwell says the decision by Pope Pius X in 1910 to bring forward the age for confession to seven years accounts for a lot of unnecessary mental anguish.

"It burdened children with a concept of grave sin and guilt that they were simply too young to understand," he told me.

He also claims that the confessional offered an inappropriate space for physical contact between a number of abusing priests and innocent youngsters. Others in the Church

, while lamenting these incidents, assert that the Church has learned and moved on.

Father Joseph Evans, a priest with Opus Dei, says that safeguards are now put in place to make sure that young children are not left alone with priests and hidden from public view.

"In the modern Church, there is more emphasis on talking to children in groups and preparing them for confession in that way. But children do have a distinct sense of right and wrong, as early as age seven."

For that reason, he says, it would be wrong to demote the central importance of confession because of a small number of historical aberrations.

I'm persuaded. Having spoken to a lot of people for BBC Heart and Soul, I believe in the busy modern world there's a role for reflection, self-examination and having to externalise this to another person. I've not been for over four years, but next week I'll be beginning another encounter with a man of the cloth with those time honoured words: "Bless me Father, for I have sinned."

And I hope he is ready for a bit more than the stealing of Penguin Biscuits.