Born at the dawn of doubt: 1840 and the first issue of The Tablet 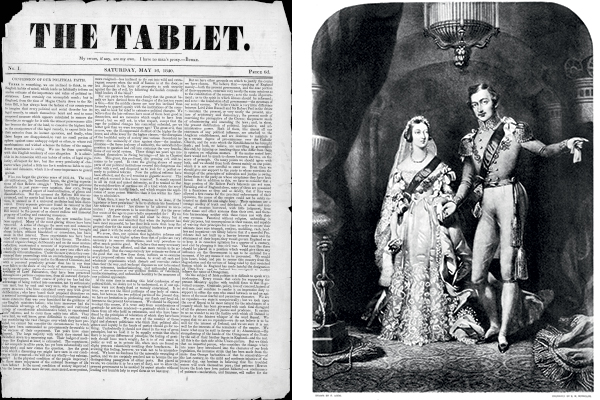 The Tablet was born, at a time of bitter divisions, hunger and disease, into the world of railways, mills and factories, and dawning scientific awareness and religious doubt. The world’s oldest religious newspaper was launched just at the moment when the ‘sea of faith’ appeared to be draining away

Newman’s Apologia ends with his leaving his university, on 23 February 1845. It is a characteristically brilliant flourish of a sentence, but also something of a shock, because, for most of the book, he has taken the reader on a journey into a highly enclosed academic circle, asking themselves questions which, even by the standards of religious believers, are fairly esoteric: “I have never seen Oxford since, excepting its spires, as they are seen from the railway.”

It is an arresting sentence because the reader is suddenly brought into the modern age. The previous pages had been about dons from the age of Jane Austen discussing the implications of St Augustine’s dispute with the Donatists in the fourth century. Suddenly, we are looking through the window of a train. We see not just the spires of Oxford, but the belching chimneys of Birmingham.

Five years before Newman left Oxford, in the year that The Tablet was founded, England was on the verge of what came to be known as Railway Mania. The coming of the railways was not something which the Church had welcomed. The Pope, Gregory XVI, had condemned the contraptions as chemins d’enfer. He was in many ways an excellent Pope, who, among other things, established both the Etruscan and the Egyptian museums in the Vatican.

When the teenaged Prince Albert was taken for an audience with Pope Gregory in 1839, the young know-all from Coburg ventured to lecture the Holy Father on his idea that the Etruscans “derived their ideas from the Egyptians”, whatever that was supposed to mean. Gregory, an expert Egyptologist, was tolerant and polite, and did not tell the young man he was talking nonsense.

Six months later, in February 1840, Albert went to England and married his cousin Victoria. He might have been an ignoramus, compared with the Pope, in the matter of Etruscan antiquities and the remains of the Pharaohs, but his enthusiasm for the modern, and especially for the newfangled railroads, marked Albert out as a man who was not merely in touch with the Spirit of the Age but was, in a way, an embodiment of it. He was a believer in science, progress, industry, commerce: all the things which made Gregory XVI feel queasy.

Yet it was into the world of Prince Albert, and the world of the railways, and the mills, and the factories, that The Tablet was born. While the House of Commons was filled almost exclusively with aristocrats, and while the Reform Act of 1832 had brought the vote to only a tiny proportion of the population at large, things were going to change.

The second and third waves of the Industrial Revolution had produced a ­powerful, wealthy and wealth-producing ­middle class. Such people would not be ­content to use the universities, for instance, simply as seminaries for the C. of E., or places where young bloods could spend a couple of years getting drunk in the grander colleges and riding to hounds. Inspired by the example of German universities, they reformed, and began to teach modern history and science, two subjects which made theology a much tougher challenge.

One of the pioneers of university reform was Prince Albert, and one of the first Englishmen knighted by the prince, on behalf of Queen Victoria, was the geologist Charles Lyell. His Principles of Geology – the first volume had been published in 1830 and expanded and developed versions of the book appeared through the next decade – changed forever the way in which people viewed the world. Hitherto, Anglican orthodoxy had clung to the seventeenth-century Archbishop Ussher’s dating of the universe, a view he had reached by counting the generations of the biblical patriarchs backwards until you reached October 4004 bc, the month in which Creation and the Fall of Man both appeared to have taken place.

Lyell showed, not merely that the planet was infinitely older than this, but that the geological theory posited on the idea of a basically static creation interrupted by ­“catastrophes” was wrong. Nature had been evolving, as Lamarck had shown. Moreover, the evidence of the fossils challenged not only the biblical dating of the Earth, it seemed a direct challenge to the idea that the Divine Mercy did not allow a single sparrow to fall to the ground without the care of the Father.

Tennyson’s anguished reflections on Lyell, in stanza after stanza of In Memoriam, are testimony to the emotional and intellectual torment of the period. Nature appeared to discard whole species, which were “cast as rubbish to the void”. Against such evidence as this, it was difficult to find the hand of the Creator, as posited by popular Christianity. Beside such vast existential challenges, the claims of Christianity, not merely for the exist­ence of a loving Creator, but for one who revealed himself exclusively through the Jewish Scriptures and the Christian Churches, seemed almost petty.

And what, besides, of those who had not had the privilege of being born in a part of the world where the light of the Gospel had dawned? With expansion, military and commercial, of the Empire, more and more people were becoming aware of the multiplicity and variety of human beings on the planet whose religion was very different from that of the 1662 Book of Common Prayer. The year 1840 saw some of the worst bullying and atrocities by the British in China, the First Opium War culminating, in 1842, with Nanking, Canton and Shanghai opening as trading ports. In India, while some supported the optimistic hope of the missionaries that all the inhabitants of the sub-continent would become members of the Church of England, there were many Europeans who felt the world was larger and stranger than was understood by “poor little talkative Christianity” (as E.M. Forster was to call it in A Passage to India).

Moreover, if the world of “heartless, witless” Nature appeared to be morally neutral, and the great world of humanity wider than theology suggested, the vast, expanding technology of industrial Britain was changing humanity itself, its social structures, its world outlook. Bourgeois freedom, as Marx wrote at the end of the 1840s, means nothing more than “free trade, free selling and buying”. It is difficult to quarrel with this judgement, and in 1840 we see an England whose aristocratic carapace was being cracked apart by the growth of middle-class, industry-funded money, and by the anger and suffering of the poor.

The Chartist movement was not simply, as its name suggested, one which called for the extension of the parliamentary franchise. It was also deeply involved, in all the industrial heartlands, with the struggle for justice for working people. Feargus O’Connor, the MP for Cork, promoted his newspaper The Northern Star as the champion of workers’ rights, and the exposer of all the horrors – child labour, reduction in wages, and in effect a condition of something crueller than slavery for those who were producing the prodigious wealth of early Victorian England.

It was through that bitterly divided, often hungry, increasingly smoky, disease-ridden land of England, in the decade following 1840, that the railways made their progress. It is all too probable that, as Newman made his way from London to Birmingham by train, glimpsing Oxford through the smog-grimy glass of his carriage, he had a copy of The Tablet on the seat beside him. Both in Oxford, where there were several outbreaks of cholera during his time, and even more as he would know in Birmingham, the 1840s were to see the urban population wiped out in their thousands by water-borne diseases. They had to wait until 1849 before Dr John Snow published On the Mode of Communication of Cholera.

By its sheer filth, injustice, baffling pain and dawning scientific awareness, it was certainly a challenging time for anyone professing a religious viewpoint. Newman and Gladstone were in a minority, among first-rate intellectuals, to retain their belief. One of the “angel faces” which Newman looked forward to meeting in a future state was surely that of his friend Hurrell Froude who had died in 1836, at 32 years of age. But Froude’s younger brother James Anthony, historian and biographer of his hero Thomas Carlyle, followed a much more characteristic path into agnosticism. “Oh, that I had faith! Oh, that I had!” Carlyle had exclaimed in his Journal. It was the heartfelt cry of the age, whether of George Eliot, tearfully translating Feuerbach’s Essence of Christianity, or David Strauss’ Das Leben Jesu, or of Matthew Arnold hearing the “melancholy, long, withdrawing roar” as the Sea of Faith pulled out, down the shingle of Dover Beach.

A.N. Wilson is an award-winning biographer and novelist. His latest book is The Mystery of Charles Dickens (Atlantic Books, £17.99; Tablet price £16.19).