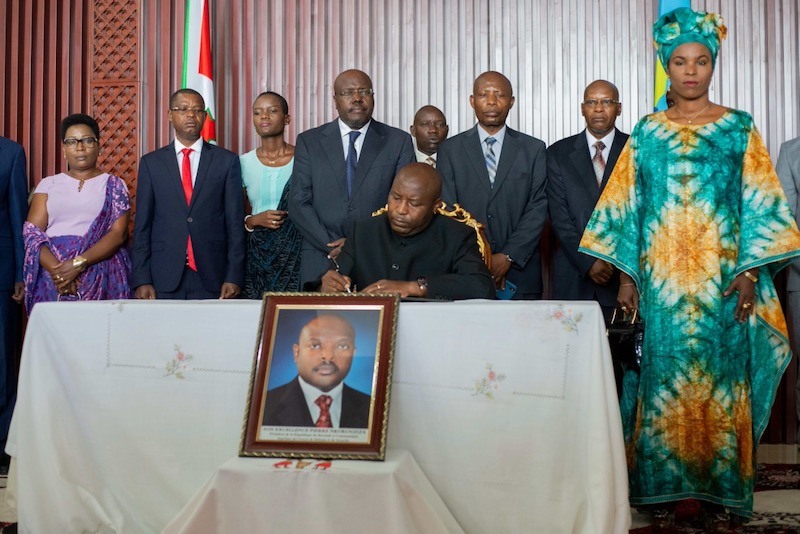 Evariste Ndayishimiye, a practising Catholic who is known to bring the importance of God into politics, has been sworn as the president of Burundi.

Ndayishimiye, a 52 years old former general, was sworn in a ceremony at the Ingoma Stadium in the new capital city, Gitega.

The president immediately promised to unite the people, promote peace and justice in the tiny East African country where majority are Catholics. He also swore to fight genocide ideology and discrimination. The country which has experienced armed conflicts in the recent past often splits along Hutu and Tutsi ethnic lines.

“Burundians should feel free to speak out and listen to each other,” he said in his inaugural speech, while inviting those in exile to return home to build the country.

Ndayishimiye will serve Burundi for the next seven years. His swearing-in ceremony had been set for August, but a constitutional court ruled last week that politician be sworn-in immediately following the sudden death of president Pierre Nkurunziza.

The government said Nkurunziza, 55, had died of a heart attack on June 8, but unconfirmed reports indicated that he had died of coronavirus, which his government had downplayed.

As nations announced lockdowns and curfews life went on normally in Burundi with officials and politicians telling the citizens that God would protect the country.

Ndayishimiye, former rebel leader like his predecessor, was born in Giteha in the Province of Gitega in 1968. He is a father of six children.

The leader was elected as president on May 20 in polls the country’s Catholic bishops said had been marred by massive irregularities. The bishops later congratulated the president elect and wished well in his new role.

He takes over a country of 11 million people which has been described as one of the world’s poorest.

The country became isolated in 2015 after Nkurunziza chose to run for a third term as president, a move the Catholic bishops and the opposition rejected as unconstitutional.

A military crackdown, after months of protests and a failed coup, saw some Catholic priests become targets. Thousands of people fled the country as refugees.