Loup Besmond de Senneville and Laurent Larcher in Bangui- La Croix International - Wed, Jul 12th 2017
Cardinal Dieudonné Nzapalainga of Bangui has denied authorizing the signing in his name of a “political agreement for peace in the Central African Republic” sponsored by the Sant’Egidio community. 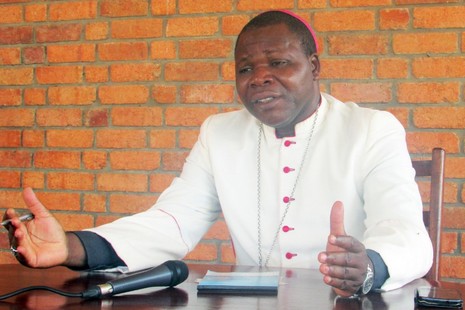 Cardinal Dieudonné Nzapalainga said he did not sign or authorize a representative to sign a “political agreement for peace in the Central African Republic” sponsored by the Sant'Egidio community.

The aim of the ten-page document was to put an end to violence in the Central African Republic (CAR).

But a few days after its publication, the archbishop of Bangui formally denied initialing the document, which was in fact signed by Godefroy Mokamande purportedly as the “representative of Cardinal Nzapalainga".

However,  in a communiqué issued on June 22, Cardinal Nzapalainga said that he had not “authorized anyone to represent him or to make commitments in his name, either in his personal capacity or as president of the CECA (Central African Episcopal Conference: Editor), or as a member of the Platform of Religious Faiths".

The interreligious platform, which includes Muslim and Protestant representatives, is involved in numerous peace talks.

In his statement, Cardinal Nzapalainga welcomed “all efforts in favor of re-establishing social cohesion in the CAR".

Interviewed by La Croix on Saturday, June 24, he nevertheless criticized the document published by the Sant’Egidio community.

“As published, the document leaves the door open to impunity for the perpetrators of violence,” he stated.

Signed in Rome on Monday June 19, the agreement provided for an immediate ceasefire. After three days and nights of work, the signatories, who included numerous political-military groups present in the CAR as well as envoys of President Faustin-Archange Touadéra, agreed on a series of points touching on political, security, economic, humanitarian and social issues.

They thus adopted the document as a “road map” towards a solution to the crisis that was meant to open “the path to pacification in the Central African Republic".

The document was signed in Rome in the presence of United Nations special representative in Central Africa, Parfait Onanga-Anyanga, observers from the Sant’Egidio community, as well as representatives of the European Union and the Italian government.

Cardinal Nzapalainga was the only religious figure whose name appeared on the document.

Meanwhile, violent and deadly fighting continued in the CAR, particularly in the Bangassou, Alindao, and Bria regions.