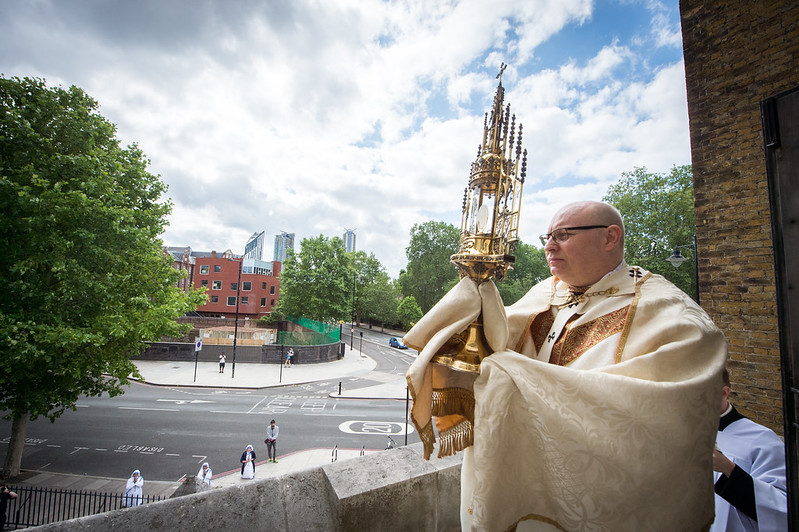 After Mass yesterday, Archbishop of Southwark John Wilson marked the Feast of Corpus Christi by blessing London from the balcony over the west door of the cathedral.  Mazur/cbcew.org.uk

Almost all Catholics in Britain have watched livestreamed Masses during lockdown, according to a new survey, but the majority will not continue doing so once normal church life returns.

Although churches re-opened this week for individual prayer, Mass with a congregation will not be celebrated again until at least July 4, according to government guidance.

The survey, undertaken by Professor Francis Davis of the Universities of Birmingham and Oxford in collaboration with Catholic Voices, shows that 93 per cent of Catholics used online worship at some point and 66 per cent had made regular use of livestreaming.

Most people missed going to Mass in the normal way, with 83 per cent indicating that livestreaming was only a temporary subsititute.

However, 17 per cent said they would continue to worship online or mainly online after churches re-open for Mass – an indication that for some people who are frail or disabled, online Mass is a very attractive alternative. Another 14 per cent said that online is the way ahead for the next generation, reflecting younger people’s liking for digital media.

Lockdown has also helped people’s spiritual well-being, according to the survey, which studied Catholic attitudes and experiences of liturgical, spiritual and worship dimensions of faith during the coronavirus pandemic.

More than half of those questioned, 51 per cent, said they feel closer to God and 55 per cent said they are more prayerful.

Bishops can also take heart from the survey, with 51 per cent of Catholics polled saying the hierarchy responded well to the crisis and 69 per cent saying the bishops did not go too far in closing churches.

The survey also gives an insight into the financial problems that the Church might face post–Covid-19, with 74 per cent saying they had stopped giving although the same number said they would do so again. It also revealed that a large proportion were confident about the financial viability of the Church post-lockdown.

By last weekend, the survey, which has been made available to parishes and online, had had more than 1,200 questionnaires submitted. Professor Davis said: “We want to find out how Catholics have been coping and what impact the crisis has had on people’s faith and attitudes towards the Church.”

Brenden Thompson, chief executive officer of Catholic Voices, said that he was “pleasantly surprised by the spiritual growth and sense of optimism experienced among Catholics in the UK” that the survey revealed.  But he warned that there could be difficulties ahead as the Church copes with post-Covid-19.

“The challenges ahead are real so if we want to capitalise on this goodwill we need to start thinking seriously about the conversations that need to happen when they come back to Mass.”

Thursday in the 5th Week of Easter
John 15:9-11 "Remain in my love, that your joy might be complete."