“The future of the Claretian mission in the Province is one of a shared mission,” said Father Elias Ayuban, CMF. November 21, 2021 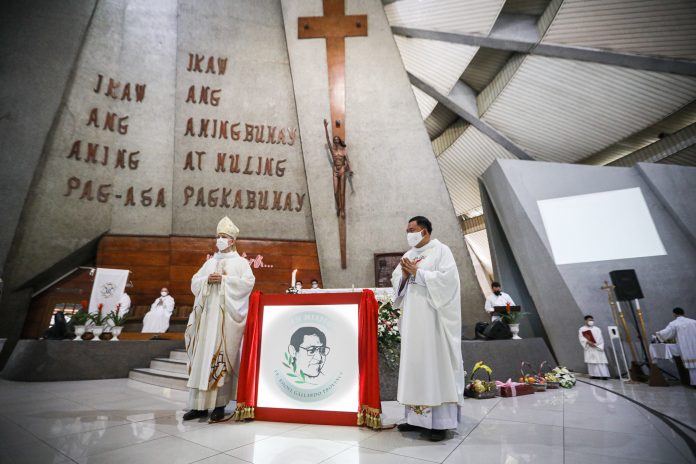 Archbishop Charles John Brown (left), apostolic nuncio to the Philippines, and Father Elias Ayuban, CMF, provincial superior of the Claretians, unveil the new logo of the Province, which has been renamed the ‘Father Rhoel Gallardo Province’ in honor of martyred missionary priest at the Immaculate Heart of Mary Parish church on Nov. 20, 2021. (Photo by Jire Carreon)

Father Gallardo was killed a few days before his 34th birthday in 2000 in the hands of the bandit Abu Sayyaf Group in the southern province of Basilan.

He was found with several bullet wounds on his body and signs of torture. Witnesses said the 43 days that the priest and the other captives spent in captivity were also days of heroism for the priest.

Witnesses said he looked for the female teachers when they were separated from the other captives.

The bandits attacked Claret School of Tumahubong on March 20, 2000, and took hostage the priest, four teachers, and 22 students.

The Prelature of Isabela in the southern Philippines launched the cause for sainthood of Father Gallardo in May this year with opening of the inquiry into his life.

The “inquiry” will be the first step toward the beatification, “per viam Martyrii” (by way of martyrdom), and possible sainthood of the missionary priest.

“We officially declare today with a decree the change of the name of the Province to ‘Father Rhoel Gallardo Province’ to promote inclusivity and to honor our brother-martyr whose cause of martyrdom has already been initiated,” said Father Elias Ayuban, provincial superior of congregation.

In recent years, the Philippine Province of the Claretians has expanded to Vietnam, Myanmar, and Australia, and now with plans to expand missionary work to Thailand and Cambodia in the coming years.

The announcement of the renaming of the Province and the launch of the new logo was done during the conclusion of the year-long celebration of the congregation’s 75th year of presence in the Philippines at the Immaculate Heart of Mary Parish in Quezon City.

In his homily during the occasion, Archbishop Charles John Brown, papal nuncio to the Philippines, noted that it is “very appropriate” that the diocesan process for the cause of canonization of Father Gallardo, coincided with the 500th anniversary of the arrival of Christianity in the country.

“[Father Gallardo] was put to death for his Catholic faith …. What a beautiful example, Father Gallardo is of the “Caritas Christi,” the love of Christ which urges us forward, which is not afraid of death, which goes to the most abandoned and outcast and marginalized people to bring the power and strength of Jesus’ love,” said the archbishop.

Father Ayuban thanked Father Gallardo’s family who was present during the celebration for offering their son to the mission.

“I was told that when the parents of Rhoel were informed about his tragic demise in 2000, both accepted the news with distinct serenity and resignation, saying that they had already offered their son to the Church and the congregation. No rancor whatsoever,” said an emotional Father Ayuban.

The Claretians arrived in the Philippines in 1946 with missionaries from the United States who established the first mission in the town of Santa Barbara in Pangasinan.

The congregation later expanded to different parts of the country, especially in Mindanao, then to South Korea, Indonesia, and Timor Leste, which are now independent delegations.

“Early on, we used to receive missionaries from the United States and Spain. Now we are a sending Province,” said Father Ayuban.

The Claretians in the country have recently sent missionary priests and professed students to Taiwan, Japan, the United States, Spain and Peru.

Father Ayuban said the presence of other branches of the Claretian Family during the anniversary celebration “accentuates our dream of a synodal province.”

“The future of the Claretian mission in the Province is one of a shared mission,” said the provincial superior, adding that “clericalism should dissipate among us to promote more vitality in our ministries and a greater richness of perspectives.”

The Claretians, formally the Congregation of Missionaries, Sons of the Immaculate Heart of the Blessed Virgin Mary, are a community of Catholic priests and brothers, founded in 1849 by Saint Anthony Mary Claret. They are active as missionaries worldwide, in more than 65 countries on five continents.