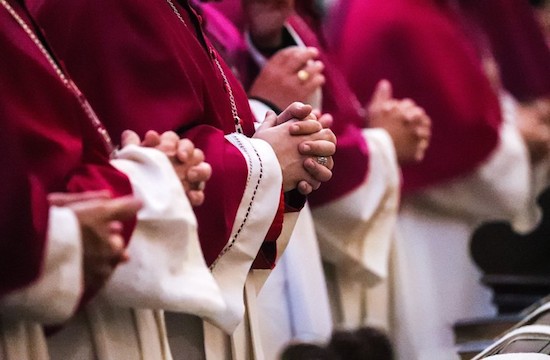 'When he speaks of clericalism, the pope insists that this problem concerns the whole Church.' (Photo by ARMANDO BABANI/ EFE/MAXPPP)

Thibault Joubert, a lay canon lawyer and lecturer in the Faculty of Catholic Theology at the University of Strasbourg, is co-organizing a colloquium on "The Temptation of Clericalism" at Strasbourg on April 25 and 26.

La Croix: Why has this colloquium on The Temptation of Clericalism been organized?

Thibault Joubert: The origins of this colloquium are in Pope Francis' denunciation of clericalism as being largely responsible for the sexual abuse committed by members of the clergy.

In 2016, in his letter to Cardinal Marc Ouellet (as President of the Pontifical Commission for Latin America, NDLR), Francis pointed out the dysfunctioning of relations between clerics and the laity, before taking up this issue more extensively in his "Letter to the People of God" in August last year.

Upon reading this letter, my colleague Bertrand Dumas and I decided that we cannot ignore this issue, and that we must combat clericalism with our own means: that is, diverse and interdisciplinary perspectives.

In what way is this an important and urgent issue?

When the pope speaks of clericalism, he insists on the fact that this problem concerns the whole Church. If there is temptation to perversion, it affects all that is most sensitive in the life of the Church.

Moreover, you only need to see the extent to which the pope's words evoked strong reactions to realize that this is a crucial matter.

Certain bishops and cardinals – who consider the causes of abuse to be external – prefer to deflect the reformative character of the pope's words by blaming moral decadence and homosexuality.

What Francis wants to demonstrate is that, on the contrary, the Church gives rise structurally to psychological, spiritual and sexual abuse.

Without doubt, this polarization within the Church hierarchy corresponds largely to the one between the defenders of a "fortress Church" and partisans of a "field hospital" Church.

However, this division is too simple to suffice, and we believed an intellectual exploration should be undertaken.

What are you expecting from the diverse perspectives between historians, theologians, canonists, biblical scholars, moral theologians and anthropologists?

Academic undertakings require these diverse perspectives. The critical position that aims to objectivize the concept of clericalism must be accompanied by an auto-critique through which canonical and theological systems investigate their own participation in this temptation.

For this to occur, there needs to be not only a theological discourse, but also a historical examination to identify the knots that over time have become blockages and, indeed, deviations.

How will the two days of this colloquium proceed?

In the first instance, we hope to posit a diagnosis, with recognized experts such as Alphonse Borras (Louvain-la-Neuve), Marie-Jo Thiel (Strasbourg) and Éric de Moulins-Beaufort (Archbishop of Reims) – whom we had invited before he was elected as head of the Bishops' Conference of France.

We will then take the time to understand some historical knots, notably in the 4th century with Michele Cutino (Strasbourg), in the 11th-14th centuries with François-Régis Ducros (Paris-Sud), and in the 16th – 17th centuries with Nicole Lemaître (Paris-Sorbonne).

It will also be a matter of understanding how the Church, in order to combat clericalism, found answers and made judgements within tradition.

In the second instance, we are going to see how to envisage clericalism's perverted relation to the sacred, qualifying the sacred from an anthropological perspective (with Sophie-Hélène Trigeaud), before seeing how this reality is assumed and corrected in the Old and New Testaments (with Pierre Keith and Denis Fricker of Strasbourg).

We will also reflect on the liturgy (with Michel Steinmetz from Strasbourg Archdiocese) as the place where clericalism is both manifested and corrected.

For the quintessential Christian life is the baptismal life in its ordinary character: this is the place of life in the Spirit.