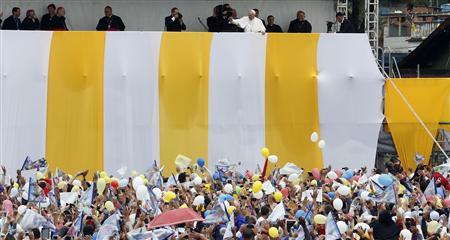 (Reuters) - Pope Francis on Thursday issued his first social manifesto, calling on the rich to wipe out vast inequalities, and later received an ecstatic welcome from up to a million people on Rio's famed Copacabana beach.

During a visit to a Rio slum on Thursday morning, the first Latin American pope called for a "culture of solidarity" to replace the "selfishness and individualism" in modern society.

"No one can remain insensitive to the inequalities that persist in the world," he told residents of Manguinhos, a sprawling shantytown, or favela, of ramshackle brick dwellings that until recently was overrun by violence and controlled by drug lords.

His speech, under rains that have persisted throughout most of his first trip abroad as pope, came halfway through a week-long visit around World Youth Day, an international gathering of young Catholics.

Despite the downpours and unusually chilly weather, tens of thousands of jubilant Brazilians and foreign visitors have turned out to welcome the pope. Vatican radio estimated the crowd at Copacabana at up to 1 million.

The World Youth Day events are an effort by the Vatican to inspire Catholics at a time when rival denominations, secularism and sexual and financial scandals continue to lead some to abandon the Church.

Brazil, home to the world's biggest population of Catholics with over 120 million faithful, is an apt locale for the pope to remind the world of inequality. A recent decade of economic growth in the country raised incomes for many, but tens of millions of Brazilians still live in poverty or with little more than the basics to get by.

In Manguinhos, Francis, an Argentine known for frequent outings into the slums near Buenos Aires even as a cardinal, smiled and visibly enjoyed the chaotic close contact with residents there. He called for more efforts to end poverty and said authorities must do more than just crack down on the drug trade to ensure opportunities for those at the bottom of the economic ladder.

"Everybody, according to his or her particular opportunities and responsibilities, should be able to make a personal contribution to putting an end to so many social injustices," he said in an address on a muddy, rain-drenched football field next to a river smelling of sewage.

Making the speech after blessing the favela's small chapel and visiting one of its homes on a recently cleaned street, the pope challenged the rich and powerful to use their influence to enact lasting change. 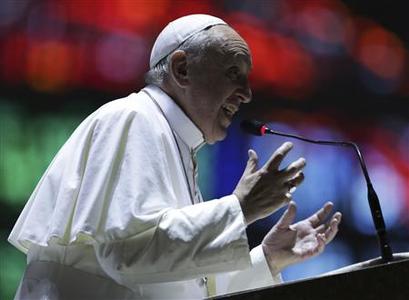 "I would like to make an appeal to those in possession of greater resources, to public authorities and to all people of good will who are working for social justice: Never tire of working for a more just world, marked by greater solidarity!" he said.

On Thursday night, when Francis presided at the World Youth Day opening on Copacabana beach, he was driven slowly through a huge adoring crowd, stopping to kiss babies and even to give his white skullcap to someone who had sewn a home-made one for him and ran to the car to hand it to him.

The weather, which has been wreaking havoc on events, forced organizers to move this weekend's two final gatherings to Copacabana from a pasture on the outskirts of the city because it had become a vast field of mud.