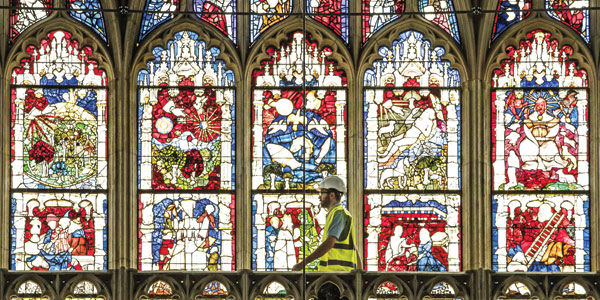 As so often with university historians, Eamon Duffy – formerly professor of church history in Cambridge, and a Catholic commentator well known to Tablet readers – has become more prolific in retirement. Last year he published a fine collection of Reformation studies, and now follows a second weighty volume. Protestantism peeks from the sidelines – it includes an astute analysis of the Lutheran artist Lucas Cranach – but the book’s subtitle is “Essays in Medieval Christianity”, and the 21 chapters supply a vivid panorama of themes in Western Christianity between the fall of the Roman Empire and the advent of Martin Luther.

All human life, and a lot of human death, is here. Topics include relics and saints’ cults, pilgrimage, early codices, the history of childhood, royal book-collecting, crusades, the birth of musical notation, monasticism, blood libels, alabaster work, medieval hoaxes, and the cultural impact of plague, in the seventh as well as in the fourteenth century – when, according to one Italian observer, the dead were stacked in pits like the layers in lasagne.

With one exception, versions of these essays have appeared before in print, and fully half the chapters first surfaced as reviews in The New York Review of Books. Yet several considerations make this rather more than a miscellany of occasional pieces. One is the NYRB format, which encourages thoughtfully discursive treatment of topics, rather than forensic dissection of texts. Another is Duffy’s trademark wit and intellectual impishness, much on display throughout – in references to pious benefactions as “devotional retail therapy”, or to Western crusaders seeming to sophisticated Byzantine hosts “as unappetising as the busloads of tattooed, beer-fuelled and bellicose British soccer fans who travel to Europe nowadays during World Cup ­competitions”.

A third is that despite, or because of, its diversity of themes, Royal Books and Holy Bones offers a broadly coherent vision of medieval Catholicism, and of the loss and gain in our contemporary distance from it. At the centre is material culture: “Christianity is and has been, first and foremost, a ­materialistic religion”, its artefacts and ­paraphernalia reflecting an incarnational impulse at the faith’s authentic core.

Inherent sympathy with this impulse does not, however, lead Duffy to sanitise or domesticate an often bafflingly alien world. An approving comment on the American medievalist Caroline Walker Bynum – “not for her tidy simplicities that bulldoze flat the intractable strangeness of the past” – might characterise his own approach. We learn of the proliferation of “vengeance miracles”, saints punishing those who showed them insufficient respect, and of the “startling” behaviour of Hugh of Lincoln, who requested permission from the monks of Fécamp to venerate the arm bone of St Mary Magdalene, and then furiously gnawed at it to secure fragments as relics. In a penetrating discussion of the thirteenth-century hagiographical collection known as the Golden Legend, Duffy reminds us that “legenda” meant simply a text to be read out out loud, without implications of fiction or fantasy. But the stories recounted in the work, full of gruesome tortures inflicted on stoic martyrs, reveal a profoundly alternate medieval understanding of sainthood: “not so much as a pattern to be imitated, but as a power to be harnessed, and a source of intercession to be supplicated”.

Catholics (not just Victorian ones) can be tempted to see the Middle Ages as an inspiring “age of faith”, but there is little rosy nostalgia in Duffy’s searching investigations. For all its popularity, the Golden Legend represented “an unimaginative clericalisation of the concept of the holy”. Monastic chronicles might be self-serving fabrications, created to underpin contested property claims: to say nothing of the barbarities of crusading armies, or the vicious stories of Jewish ritual murder, which in the twelfth century “passed like a poison into the bloodstream of Christendom”.

Nonetheless, for Duffy, medieval Christianity is to a considerable extent redeemed by its collective and communal character; its understanding of salvation as a shared and cooperative business. The conviction is underpinned by some brilliantly counter-intuitive analyses. Several historians of the later Middle Ages have seen the growing popularity of Books of Hours, and consequent private reading of the Psalms, as marks of an antisocial spiritual individualism. But Duffy’s examination of the marginal annotations in Thomas More’s Psalter suggests a profoundly liturgical and ecclesial mode of reading and reflection. Similarly, where scholars have regarded pilgrimage as a “liminal” phenomenon, dissolving boundaries and widening horizons, Duffy argues that (in England at least) the practice was often “resolutely sedentary and unadventurous”, affirming rather than transcending local solidarities. In the rebarbative medieval obsession with relics, from which modern Protestants and even modern Catholics might instinctively recoil, Duffy identifies a shared “hope of permanence, transfiguration and glory beyond the multitudinous ills of humanity”.

Critics of Duffy’s magnum opus, The Stripping of the Altars, sometimes accuse him of presenting the landscape of the medieval Christian past, before Protestant bulldozers set about reshaping it, as an unchanging Eden. Such charges were always exaggerated, but the offerings here lay them firmly to rest. Saints’ cults rise and flourish, and then disappear almost without trace. Things we might regard as immemorial turn out to have precise historical origins. The familiar wording of the Hail Mary, for example, was a product of the sixteenth century, and not in widespread use before 1568. Canonisation was an unregu­lated process, not a tightly controlled papal monopoly, for much of the medieval era.

It seems apt to think here of Newman’s famous line, “in a higher world it is otherwise, but here below to live is to change, and to be perfect is to have changed often”. Duffy is a firm admirer of “tradition”, rightly understood. Sympathetic Catholic readers of these scintillating essays will come away strengthened in their conviction that the People of God, separated and united across time, are not the stalwart garrison of a fortress, but a band of intrepid wayfarers, a pilgrim Church on earth.

Weekday in Ordinary Time
Matthew 10:1-7 As you go, make this proclamation: 'The Kingdom of heaven is at hand.'"