Easter atrocity in Sri Lanka: A deep wound to the nation 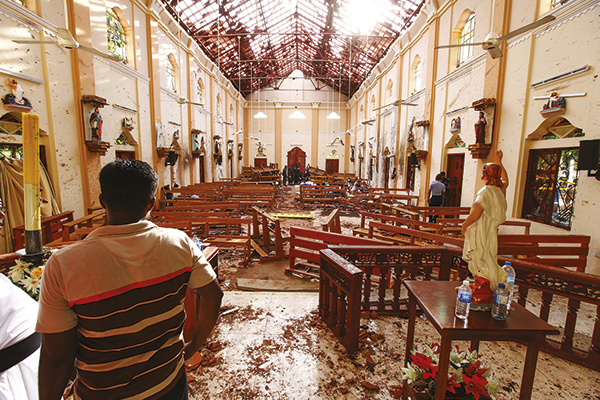 The attacks on churches and hotels have led to assumptions as to the motivations of the bombers. But the country has a complex and fragile cultural and ethnic mix

The bombings of churches and hotels in Sri Lanka on Easter Sunday were intended to strike a devastating blow to the country’s million-strong Christian community. Suicide bombers detonated one set of bombs at churches in the cities of Colombo and Negombo on the western coast, home to many Sinhalese-speaking Catholics. Another was detonated in a Protestant church 200 miles away – in Batticaloa, a city on the Tamil-majority eastern side of the island.

Catholicism in Sri Lanka has a long and complex history. With its beautiful Baroque-style churches and roadside shrines to the Virgin Mary, Negombo is known as “Little Rome”. But the status of the Church mirrors some of the dynamics of colonialism as well as present-day ethnic and religious tensions. The attacks were the deadliest co-ordinated acts of terrorism Sri Lanka has ever suffered, and the first on such a scale since the bloody 27-year-long civil war with the Tamil Tigers ended ten years ago. They are the first directed at Sri Lanka’s Christian minority.

So far, there are no complete answers to why more was not done to thwart the bombers. It has been suggested that infighting within the government contributed to a breakdown in security and communication in the days leading up to the attacks.

Emerging reports indicate that a little-known Islamist local group, called National Thowheed Jamath (NTJ), was behind the bombings. Cabinet spokesperson Rajitha Senaratne has said that the suicide-bombers were Sri Lankan. But he also said that the strikes could not have succeeded without an international network.

Sri Lankan Muslims are baffled by the attacks, as well as nervous and afraid. Muslims are also a minority in Sri Lanka. They have been the target of both Tamil and Sinhalese attacks. Why would radical Muslims specifically target Christians? It suggests that this Islamist group (if it is indeed responsible) is being steered by outside elements inspired by a global jihadi discourse. This sees the West and Western institutions, of which the Church is seen to be part, as the overarching global enemy.

Christians are one of the country’s smallest religious minorities, according to the Centre for Policy Alternatives. This has reported that, according to the 2011 census, the majority of Sri Lanka’s population, 70.2 per cent, are Buddhists. They are followed by Hindus, numbering 12.6 per cent of the population, Muslims, on 9.7 per cent, and Christians, who make up 7.2 per cent.

Most Buddhists come from the Sinhalese community and are concentrated in 16 of the 25 districts in Sri Lanka. Hindus are mainly Tamils, either of Sri Lankan or Indian origin. Most of them live in the northern and eastern parts of Sri Lanka. Muslims are ethnic Malays and mainly live in urban areas in the south. Malays in the north and east of the country tend to live in rural areas. Christians generally belong to both the Sinhalese and Tamil communities and are concentrated in the urban and coastal areas of the country.

In theory, Sri Lanka has an extensive national and international body of laws to guide the relevant judicial institutions to protect and promote freedom of religion or belief. These include its accession to the International Covenant on Civil and Political Rights (ICCPR).

The right to freedom of thought, conscience and religion is enshrined in articles 10 and 14 (1) (e) of the constitution. But there is an internal contradiction in the constitution, as Article 9 states that Buddhism should be granted “the foremost place, and accordingly it shall be the duty of the State to protect and foster the Buddha Sasana, while assuring to all religions the rights granted by Articles 10 and 14(1)(e)”.

Statistics gathered by NGOs such as the Centre for Policy Alternatives and the National Christian Evangelical Alliance of Sri Lanka (NCEASL) show that violence targeting religious places and persons is not new – and that the number of reported attacks is rising.

The nature of the attacks has also changed. Incidents are now being reported in different parts of the country. Some of these attacks are repeated acts of direct and indirect violence. This indicates that the attacks are not isolated but are a result of a systematic policy, targeting people based on their religious identity.

The rise of extremist Sinhalese-Buddhist nationalist groups in Sri Lanka has also been noticeable since the end of the civil war.

Their influence has been seen to spread through an increased prevalence of hate speech that denigrates religious minorities. Hard-line Sinhalese-Buddhist groups in Sri Lanka include the Bodu Bala Sena (Buddhist Force Army), the Sinhala Ravaya (Voice of the Sinhalese), the Ravana Balaya (Power of Ravana) and the Bodu Pawura (Wall of the Buddhist). The network of extremist Buddhists is also growing across Asia, in countries such as Myanmar (Burma) and Thailand.

This received international attention in March 2014 when the UN Human Rights Council adopted a resolution on reconciliation, accountability and human rights in Sri Lanka. It urged the Office of the High Commissioner to undertake a comprehensive investigation into alleged serious violations and abuses of human rights in the country. The resolution noted that the Human Rights Council was “alarmed at the significant surge in attacks against members of religious minority groups in Sri Lanka, including Hindus, Muslims and Christians”.

Only two months later, in June 2014, the southern coastal towns of Aluthgama and Beruwala saw the largest anti-Muslim riots Sri Lanka has ever seen. At least four people were killed and 10,000 displaced. The riots were led by the Bodu Bala Sena, one of the extreme Buddhist organisation, and it has been claimed they were the result of a gradual escalation of anti-Muslim violence generally in Sri Lanka.

The political transition in Sri Lanka started when the country held free and fair presidential and parliamentary democratic elections in January and August 2015 respectively. A pledge made by President Maithripala Sirisena, to ensure religious harmony by establishing institutions and mechanisms among religious leaders to work for religious coexistence and against extremism, was welcomed.

The country took several positive steps. They included passing the nineteenth amendment to the constitution, an action that paved the way for the parliamentary elections that were held that August.

Another was the establishment of the Constitutional Council, tasked with supporting the depoliticisation of public services and government authorities, including the country’s Human Rights Commission. Democratic space began to open up after the new government elected in 2015 indicated its greater openness to engagement and dialogue with civil society. This drew positive responses from members of civil society groups and Human Rights Defenders (HRDs), as they now felt better able to assert their civil and political rights. Despite these welcome developments, however, religious tensions remained high.

In June 2016, at the time of the second anniversary of the Aluthgama carnage, Sri Lanka’s worst-ever anti-Muslim riots, which displaced 10,000 people, the Bodu Bala Sena group threatened to repeat the violence. Civil society organizations called on the government to monitor the acts of extremist groups to prevent such violence, motivated by religious hatred. But when a prominent human rights lawyer, Lakshan Dias, quoted statistics from the National Christian Evangelical Alliance of Sri Lanka (NCEASL), which indicated that Christians had been subject to 195 incidents of discrimination, intimidation and violence between 2015 and June 2017, he was threatened with disbarment unless he retracted his comment and apologised within 24 hours.

Religious intolerance is a concern for Sri Lanka’s neighbours too. Just under a year ago, a family of six in Indonesia carried out three church bombings in Surabaya, the deadliest terrorist attacks the country had seen in a decade. They killed 13 people and injured more than 40 others. The family had links to Islamic State in Syria.

A new chapter of violence appears to have begun in Sri Lanka. Old divisions may yet widen further. The government must now investigate and prosecute those responsible for the attacks, while ensuring that the right to freedom of religion and belief is upheld and promoted for all Sri Lankans, so ending the culture of impunity that fuels this violence. The international context of religious intolerance is a reminder that the challenge cannot be isolated to one particular country or region – it is a global concern, and one that touches us all.

Kiri Kankhwende is the Public Affairs Team Leader and Steven Selvaraj is the South Asia Team Leader for CSW, a human rights organisation specialising in freedom of religion or belief.