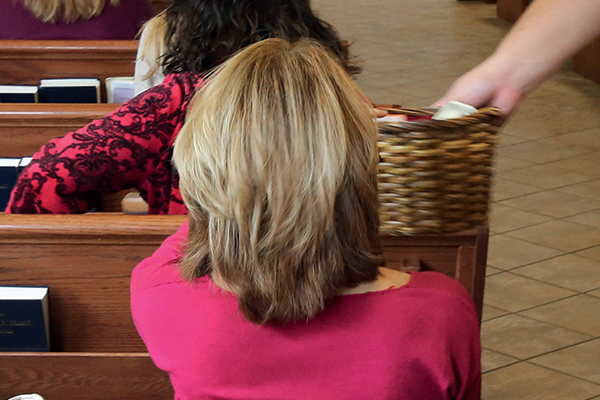 ‘Money from the laity is the bedrock of church finances’ - Photo: CNS, Bob Roller

The lockdown has been more than a passing financial crisis for the Church in England and Wales. It has been a wake-up call that is challenging the way parishes and dioceses are funded and managed

When the doors of Catholic churches across Britain clanged shut in late March, it was a terrible blow to Massgoers. For priests, too, it was a terrible moment – and not just for spiritual reasons. The timing – just a few days before Holy Week – could not have been worse. For however much priests focus on the spiritual side of Easter, it also looms large for another, very practical reason.

Easter Sunday is one of only two days in the liturgical calendar – the other is Christmas – when the Mass offerings are divided up between the priests of the parish. These offerings are a welcome boost to priests’ low incomes. They can mean the difference between having a broken-down jalopy or a decent reliable car; between managing only a few days’ break with relatives or having a proper fortnight’s holiday in the summer. But this Easter there was almost nothing.

In Southwark, priests have been authorised to take a minimum £1,500 as their Easter Offering from the general parish collection, even if the amount given by the people did not reach that amount. Some parish priests, knowing how low funds have fallen, have been unwilling to take that much.

Of course, it was not only Easter Sunday when the pews were empty. Churches in England and Wales were closed for 13 weeks. While in some parishes – usually more affluent ones – people increasingly make their financial contribution by standing order, plenty are still heavily reliant on cash. In the Diocese of Leeds, for example, nine parishes went into lockdown entirely reliant on offertory envelopes and cash in the collection plate. As one diocesan trustee said to me: “The lack of the plate has been a disaster for parishes.” And not only for parishes: money from the laity is the bedrock of church finances, so the lockdown has hit diocesan finances too.

It varies from diocese to diocese, but diocesan trustees have told me that 70-80 per cent of their income comes from the parishes, with the rest from investments. Without that regular cash flow the Church cannot function: it cannot run its churches, much of its education work, its safeguarding, its youth programmes, its work to help the poor and others in need. And though priests do not receive salaries, considerable sums have to be found for their care in their retirement.

The financial crisis is highlighting a sharp difference between rich and poor parishes. Research organised by Francis Davis, professor of Religion, Communities and Public Policy at the University of Birmingham, suggests that the pandemic has made the difference even starker. He cites as an example his own Diocese of Portsmouth, where income in affluent parishes in Winchester, around 75 per cent of it coming through standing orders, has held up, while some parishes in the cities of Portsmouth and Southampton have been badly hit. “There it’s more like 25 per cent have standing orders,” he says. “Income is collapsing because the community is very poor and can’t afford standing orders, or because English is a second language and people have not understood the message about standing orders.”

But the financial impact of the pandemic on many parishioners, some of whom have lost their jobs or are helping out family members in dire straits, has also caused a drop in money from standing orders. Davis says more than 70 per cent of those he surveyed said they had stopped regular giving, whether through the plate or by standing order. This has left some dioceses looking for alternative ways to make sure priests have enough to live on. Salford diocese, for example, which says that the closure of churches “result[ed] in a significant drop in our income”, has tried to devise an online giving system and is starting a contactless giving pilot. The Archdiocese of Birmingham has also provided an online donation option for each of its parishes.

Provision has been made by Leeds diocese to ensure that no priest is at risk of becoming destitute, with an allowance being given to them. Covid-19 has put many priests in a particular jeopardy, because they are treated as self-employed by the government and must pay their own national insurance; yet they are taxed on their incomes as office holders, with tax collectors HMRC using provisions normally used for employees. This appears to have coloured the thinking of HMRC over Covid-19. Some priests with empty collection plates have applied for Chancellor Rishi Sunak’s Self Employment Income Support Scheme (SEISS). They have been told that they are ineligible as they are deemed “non-trading”.

David Palmer, treasurer of the Archdiocese of Birmingham, is so concerned that he has written to HMRC and to the Chancellor, urging a review of what he calls “this inequitable treatment”. He told Sunak that he does not believe that the government intends that “Catholic priests who have a key role in the community – ministering to their parishioners including the poor, marginalised, sick and dying – should be excluded from a scheme designed to help low-paid individuals during this difficult period of lockdown. Since the restrictions on gatherings at churches are likely to continue for some months, the impact on their finances is likely to be considerable.” Mr Palmer has had no answer to his letter.

While priests may not be on the diocesan payroll, parish lay staff are, and many were placed on furlough. Ian Burrell, chief operating officer of the Diocese of Leeds, says “at its height, close to 50 per cent of our employees” were furloughed. Mr Burrell gave an insight into how intensely dioceses have had to manage the crisis.

“The curia maintained close management of activities since mid-March with twice-weekly virtual contingency planning meetings,” explained Mr Burrell. “We quickly determined a financial plan to manage effectively through the pandemic and to maintain financial flexibility. Cash is crucial in these types of challenging conditions and plans were immediately determined and implemented to manage cash throughout the expected duration of this pandemic.”

The lockdown hasn’t just been about handling an emergency; it has been a wake-up call about the future of dioceses. Although public Masses have resumed, many parishioners are staying away due in part to continuing anxiety about the virus. Tough decisions will have to be made to reduce expenditure, and some imagination will be needed to try to increase income. The majority of Catholic dioceses in England and Wales are run as charitable trusts and study of their accounts, even pre-Covid, indicates that some of them struggled to balance their books. The accounts submitted for 2018 showed that Birmingham spent £26.5 million, while its income was £22.5m; Wrexham spent £2.65m, while income was £2.42m; Leeds spent £11.88m, while its income was £11.3m; and Southwark spent £35m, while its income was £29.5m.

Southwark, whose archbishop, John Wilson, took over a year ago, is “currently in the early stages of re-organisation to ensure it continues to be fit for mission” and to ensure “it is increasingly financially stable as it looks towards the future”. It has acknowledged that it needs to reduce costs and it will be “restructuring to function within its means”.

Dioceses have limited choices. Cutting costs for a business usually means reducing the salary bill but because the Church uses unpaid clergy in many positions there is usually far less scope for wage-cutting than for a conventional employer – its only option is to target lay staff, which may be deemed unjust. Then there is expenditure on essential services that cannot be reduced. No diocese, following the searing criticism of the Catholic Church’s record by the Independent Inquiry into Child Sexual Abuse, would dare reduce the size of its safeguarding team.

Many dioceses are looking at new ways to raise money. I’ve been told that taking out a short-term loan is being considered by at least one board of trustees: “Interest rates are currently very low and a diocese is a safe bet. They have assets. There is no risk of them defaulting.” Dioceses in England and Wales have been set up as charitable trusts and Charity Commission submissions show that although they vary markedly in size, several have significant investment portfolios. In 2018 the richest, Liverpool, held a remarkable £116.9m and Westminster £106m, while Leeds and Clifton had comparatively paltry pots of £11.4m and £12.16m.

One option for an oganisation in a crisis is to liquidise some of its assets. It’s usually recommended that, even with long-term investments, at least 90 per cent of a charity’s investments should be realisable within three months, and short-term reserves should be realisable within a month – in effect, this is money for a rainy day. Diocesan trustees will need to review their liquidity and consider moving money into more accessible pots.

Then there are a diocese’s property assets, which are often considerable: not only churches and schools but properties acquired through gifts and legacies. While you do not need permission from the Charity Commission before selling assets, you are obliged to get the best deal possible for the charity – and in a depressed property market, it might be difficult to secure anything close to a good deal.

The most drastic step a diocese can take is the closure of churches. If a parish’s income did not recover after lockdown, and its shrinking and ageing population continued to stay at home and watch livestreamed Mass, and few were paying by standing order, the temptation to resolve the financial pickle by closing the church and merging it with a neighbouring parish can be irresistible. Many Catholic churches are in the “wrong” place: they were built in nineteenth-century inner cities for migrant workers whose descendants, thanks to their Catholic schooling, have moved up the social scale and now live elsewhere.

But church closures often cause uproar, as the Bishop of Salford, John Arnold, discovered when he announced in 2017 that the diocese would close 22 churches as part of a reorganisation plan. Parishioners feel a strong connection to “their” church because they were baptised there or their parents married in it, even if they might no longer attend regularly. While the reorganisation of parishes might mean some cost savings, it does not mean a diocese recoups assets: canon law decrees these are passed on to the parish that will serve the parishioners of the closed one.

What happens next will ultimately depend on the willingness of the laity in England and Wales to increase their contributions to the running costs of the Church. While Cardinal Vincent Nichols has indicated that there will need to be a review of the Archdiocese of Westminster’s resources, it is in a relatively healthy situation.

Every priest in the diocese is guaranteed a wage of £9,500 a year, deducted from the parish account, made up of the Christmas and Easter offerings, Mass stipends and stole fees. The diocese has worked hard on what it calls its “financial resilience” in recent times, focusing on increasing the take-up of standing orders and online donations. It says that it has seen “an outpouring of generosity, both in time and money”, over the past few months.

Westminster has pockets of poverty but a great deal of affluence too, and this may have saved it from slipping into dire straits. Other dioceses are not so fortunate. It seems that in ecclesiastical finances, as in so many other ways, this pandemic has shown up stark inequalities between rich and poor.

Catherine Pepinster is a former editor of The Tablet.

Saint Joachim and Saint Anne, parents ...
Matthew 13:31-35: The mustard seed becomes a large bush and the birds of the sky come and dwell in its branches.