England riots: The world is watching 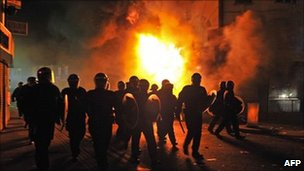 When there is an outbreak of violence, reactions are often formed by long-held political beliefs. There is point-scoring. There is some schadenfreude.

All of this has been there but also, this time, a recognition that Britain's problems are widely shared.

Some of those who have opposed the current European creed of austerity cuts see the trouble as the inevitable rage against deprivation and a bleak future.

Others see the unrest as part of a gang culture that has taken root in the past 15 years, even while more money than ever before was being pumped into public services.

Certainly Europe has been watching. Its papers and TV channels have devoted enormous coverage to the riots.

Liberation, a left-leaning paper, made a wider point: "The riots in London are a serious alarm call for the UK but also for all mixed and unequal Western societies".

L'Express, too, asked "London today, Paris tomorrow?" The paper went on: "We have the same type of youths who are poorly integrated, unemployed and victims of the economic crisis." 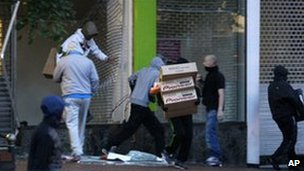 Indeed having covered the unrest in the Paris suburbs, or banlieues, there are similarities - but there are differences.

Most of the violence in 2005 was confined to the large estates that ring the French capital.

In London, rich communities live alongside poor public housing. In that sense, said one French paper, the "scenes from London inspire an even stronger, awesome fear".

Both in France and the UK - for all the efforts, the funding, the public inquiries - integration for many minorities remains elusive. Some minorities prefer it that way, but many feel outsiders in the society they have chosen. Others feel excluded from the more fulfilling jobs.

Some of these tensions reflect a Europe where 24 million people are without jobs.

When there are new arrivals, they often compete with those already struggling on the margins of society.

I remember a visit to Barking and Dagenham, where some of the fiercest opponents of more immigrants were African migrants who understood that their toe-hold on society would be threatened by newcomers.

In truth, many European societies are struggling with integration, and it is made much harder at a time of economic downturn.

In the European coverage little attention is given to gang culture, where young people find their identity in a gang.

For some of the rioters looting was a gang activity and was bragged about over rival gangs. In some instances there are reports of rival gangs working together.

Gangs, of course, reflect social and family breakdown. Why it has mushroomed in London - even when significant funds were being invested in the public sector - will, I am sure, be long discussed. It was also the case that many local authorities employed advisers designed to improve community relations.

In one article entitled The riots of Paris and London: A tale of two cities, Bruce Crumley wonders what the lasting impact will be. "It numbs the mind to contemplate what kinds of new attacks on multiculturalism will surge in Britain once the waves of nightly violence subside."

He says that after the French riots in 2005, Paris was able to to promise more money for the suburbs and the replacement of the worst housing projects but, he notes, David Cameron has no money.

The German magazine Der Spiegel says that "some Londoners are fleeing to the continent on Eurostar".

Somehow I doubt this, but the paper describes a police force that "appears to be impotent". The TV images reminded the correspondent of Mogadishu, and he says the riots are David Cameron's Katrina moment - a reference to George W Bush's lack of grip after the hurricane hit New Orleans.

There are frequent references to the Olympics in a year's time and the perceived damage to "Britain's international reputation".

In a more reflective tone, a Spanish paper questions whether representative democracy is incapable of dealing peacefully with the growing unrest.

All over Europe cuts are being made to the public sector, to benefits, to social programmes. The safety net is being weakened. Europe's much-vaunted way of life is changing. All of this is happening at a time of shocking youth unemployment. Over 40% in Greece, over 43% in Spain, over 60% in Naples, the city I am writing from.

Parts of Europe are undergoing a cultural revolution. The old Europe with its extensive welfare programmes is in jeopardy.

There will be much to argue over. Do benefits weaken or strengthen commitment to society? After all - despite all the educational support and welfare programmes - a persistent underclass remains, often alienated from society.

Last year when I was in Dublin, Bill Clinton was there. He spoke of the dangers of implementing austerity without offering hope.

That's what struck me about the European coverage of Britain's riots: A recognition that for much of Europe these are challenging times where growth is elusive and where funds will be leaner than in the past and where even for the educated young there is little prospect they will share the same way of life as their parents.