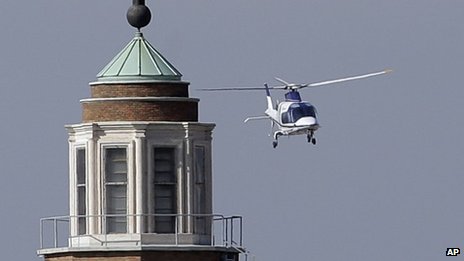 Former Pope Benedict has returned to the Vatican, two months after becoming the first pontiff to resign in 600 years.

He was flown by helicopter from the Castel Gandolfo papal summer residence to live permanently in Vatican City.

Greeted by Pope Francis as he arrived, he was driven the short distance to his new accommodation.

Benedict, 86, was last seen in public on 23 March and there has been speculation about his health.

Observers said at the time he appeared more frail than when he stepped down on 28 February.

There have been brief periods in history when two - or even three - rival popes in different parts of Europe each claimed succession to St Peter.

But never before have there been two popes living in close proximity inside the Vatican.

Former Pope Benedict is now residing in a former convent situated in the Vatican Gardens, where he intends to devote himself to a life of prayer. He is only 10 minutes walk away from his former spacious residence, the top floor apartment of the Apostolic Palace overlooking St Peter's Square.

The renovated convent has a library and a small chapel as well as a guest bedroom for the former pope's elder brother, also a priest.

Pope Francis has taken up his residence in the Domus Sanctae Marthae, a 120-room hotel next door to Saint Peter's Basilica, where he occupies suite 201 on the second floor.

Pope Francis finds the former papal apartments too large for his taste and prefers simpler accommodation.

But he receives VIP visitors in the more formal surroundings of the Apostolic Palace.

However, Vatican spokesman Federico Lombardi said this week that Emeritus Pope Benedict was not ill.

No live TV coverage of the former pope's return was allowed by the Vatican and no images of Benedict himself were issued.

'Hidden from the world'

Benedict will live in the converted Mater Ecclesiae convent just behind St Peter's Basilica, with his personal secretary, Georg Gaenswein.

The building, described as "small but well equipped" by Mr Lombardi, includes an attached chapel, a library and a study.

There is also a guest room available for when his older brother, Georg Ratzinger, visits.

The two then held a "brief moment of prayer" in Benedict's chapel.

Benedict will now dedicate himself to a life of private prayer in the service of the Church, according to the Vatican.

His arrival heralds an unprecedented era of a former pope living close to his successor at the Vatican.

But at the time of his abdication, Benedict suggested he would not try influence his successor, saying he would live out the rest of his days "hidden from the world".

At a meeting in March with Pope Francis, he also repeated "unconditional reverence and obedience" to his successor.