Face to face with London’s cleaners 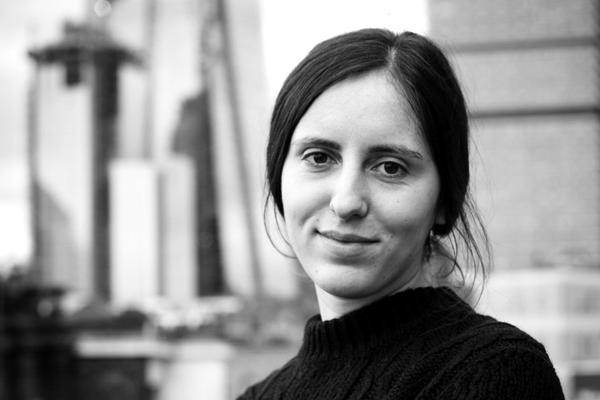 Dumitrita, 22, newly arrived from Moldova: 'Everything is a surprise in London' - Photo: Rosie Wedderburn

The 11 beautiful black and white portraits of people of varying ages, nationalities and religions are striking for their resourcefulness, modesty and charm. As many of the sitters hold down several jobs at a time and some are studying as well as working long hours on night shifts, assembling them together all on one day proved a tricky task for photographer Rosie Wedderburn. Each belongs to one of the City of London’s most familiar yet overlooked group of workers – that amorphous community responsible for cleaning the City, mostly in the small hours, long after everyone else has gone home or before even the earliest of starters arrives to switch on their computer.

If you find yourself in the City before the end of August, be sure to drop in on St Sepulchre church at Holborn Viaduct, where these compelling portraits are exhibited. A church is a good place to celebrate these memorable individuals but it shouldn’t be the only one. These faces should be on show in the National Portrait Gallery: they are just as characterful and intriguing as the royals and generals and celebrities on its walls. Here is an exhibition that puts some of London’s least noticed citizens centre stage.

The sitters for the portraits are all employed by the contract cleaning company, Clean For Good. A fully accredited “Living Wage Employer”, Tim Thorlby, its managing director, offers professional training and proper terms and conditions, and aims to change the way that cleaners in the UK are employed.

Breaking into a notoriously fractured and unregulated industry is difficult if you want to uphold decent standards for each and every one of your employees. “A breath of fresh air” is one recent recruit’s description of Thorlby’s business model. And it seems to work. Since starting in 2017, Thorlby has increased his clients, as more City firms choose to work with companies that guarantee that all benefits are passed straight on to their workforce.

Clean for Good was helped to get off the ground by three Christian charities, the City parish of St Andrew by the Wardrobe, the Centre for Theology and Community, based at the City church of St George-in-the-East, and the Church Mission Society, which together have a 75 per cent stake in the business.

Many companies talk about “fairness” and “respect” but once they grow beyond being on first-name terms with each employee their original vision is often forgotten. Though awareness is growing about the spectre of modern slavery it is all too easy for companies and even charities to turn a blind eye to the detailed circumstances that led to the person recently arrived in the UK who is emptying your wastepaper bins and cleaning your stairs.

Wedderburn wanted as many members of this usually invisible workforce as were willing or able to come and sit for her at the Menier penthouse studio atop the old chocolate factory in Southwark, which gave a reduced rate on its studio fee. Wedderburn gave her own services for free. She had heard about Clean for Good after having been shocked to discover the working conditions of some of the staff she had met through being a trustee elsewhere. She was keen to talk to each of the cleaners at length before even lifting her lens.

Somehow Wedderburn has judged the scale just right – there’s a nobility to her subjects: they are not overwhelmed by the corporate life of the City and survey its epic size or look back towards us as if halfway through a natural conversation. The church of St Sepulchre is itself one of Clean for Good’s clients, and its majestic nave makes an ideal setting for Wedderburn’s portraits.

Wedderburn treats each subject even-handedly and with attention and respect. Her images are the very opposite of selfies. They reflect the wisdom and experience of each individual. They delight in the restrained, natural but unexpected coming together of colleagues, many of whom knew little of each other’s lives before this project gave them the opportunity to meet.

Subtlety and discipline are the key to these portraits, both attributes these City cleaners have in spades. Managers in City firms don’t care if one of the cleaning team is off sick, and it is expected that you rally round colleagues whenever necessary. Wedderburn’s portraits do not harangue or ask for sympathy. These are not campaign posters put up to accost our conscience as we enter a place of worship. This union of church space and figurative art intrigues, delights and inspires. It is a sort of lesson, but of the gentlest kind.

Magdalen Evans is an art historian  and biographer. ‘To See Or Not To See? Face to Face with the Cleaners of London’ is at St Sepulchre’s Church, Holborn Viaduct until 31 August. Check for opening times.

SNAPSHOTS FROM THE LIVES OF THOSE THAT DO

Ivonne is originally from the city of Loja in Ecuador but has travelled far and wide and lived in various countries. One of her favourite experiences was living in, and exploring, Israel while she worked as a carer for elderly people in Tel Aviv. She also once worked in a cheese factory in France, which she enjoyed rather less. When she is not working, Ivonne enjoys reading, especially Latin American history.

Maria is one of the few Londoners who speaks Quechua as her first language – an indigenous language of South America, originally spoken by the Inca peoples. Born in Ecuador, she lived for nearly 30 years in Portugal, where her two children were born and grew up. When the family’s chain of shops suffered in the economic crisis, they moved to the UK. She is currently learning English, not least so she can pass her driving test and drive again, something she misses.

“The most important thing for me is my family.” Jorge’s wife and two grown-up children live back home in Colombia. He has been in the UK for seven years and usually sees them twice a year. Jorge is working hard to earn and save money, so that they can buy their first house. In addition to his two jobs, he is training to be an accountant in the evenings. He enjoys cooking and likes the idea of being a chef one day – although for now he’s sticking with accountancy.

Dumitrita is newly arrived in London from Moldova and is learning a lot, pretty fast, about her adopted home. Has anything surprised you here? She laughs: “Everything is a surprise in London!” She loves connecting with new people and learning new skills. She is trying to absorb as much as she can from living in the city. One day, she’d like to travel more and see as much of the world as she can. What can she tell us about Moldova? “Almost everyone makes their own homemade wine. You should always try this if you go there.”

Washington is one of Clean for Good’s cleaning managers. “My inspiration every day is listening to music, whatever I’m doing.”  When he first moved to the UK from Ecuador, Washington played in a band, but he now prefers to listen to music, rather than make it. He loves travelling and visiting new places and would like to do more. He enjoys working in the cleaning sector too. “My guide is my dad. He told me, ‘Whatever you do with love, you will always do it well.’”