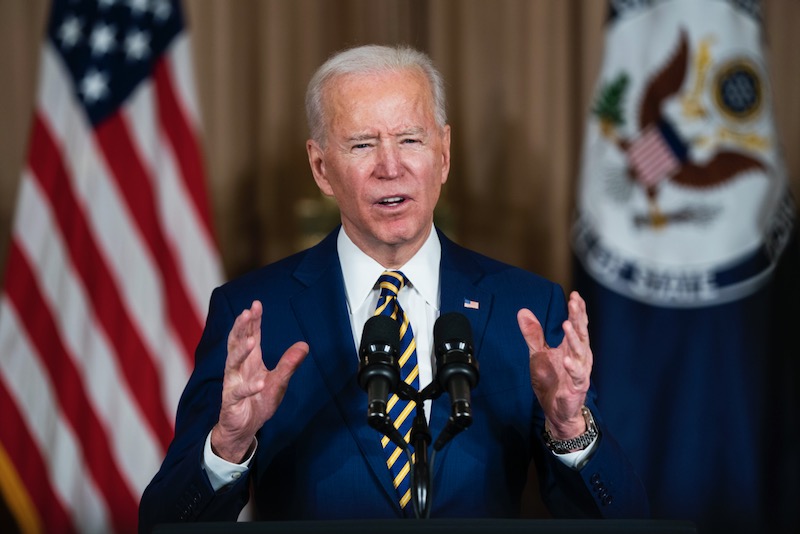 President Joe Biden has spoken of the central role faith plays for him in showing a way through dark times. And he has pledged to confront and defeat white supremacy and domestic terrorism.

Speaking at the annual National Prayer Breakfast, he said: “For so many in our nation, this is a dark, dark time. So where do we turn? Faith. Kirkegaard wrote: “Faith sees best in the dark.” I believe that to be true. For me, in the darkest moments, faith provides hope and solace. It provides clarity, and purpose as well. It shows the way forward, as one nation, in our common purpose to respect one another, to care for one another, to leave no-one behind.”

President Biden, the second Catholic to hold the office, thanked his predecessors Jimmy Carter, George Bush, Bill Clinton and Barack Obama, who all participated by sending video or written messages. He did not mention Donald Trump, who did not send a message of any kind.

Since the tradition began with President Eisenhower, it has been the practice for the President and his living predecessors to attend the annual breakfast. Held online this week because of the pandemic, Trump is the first not to have attended.

President Biden, a lifelong and deeply-committed Catholic, said he and his wife Jill were “humbled by your prayers and it means everything to us”.

He said: “I have attended many of these prayer breakfasts over the years with the nation at war, and struggle and strife, the nation at peace and in prosperity. A nation, though, always in prayer. But we know this time is different.”

He described the ravages of the pandemic, in which more than 400,000 Americans have lost their lives.

He said: “Millions are out of work. We see long lines for food at food banks that stretch for miles. We hear the call for racial justice, some 400 years in the making. And we know the dream, more important the reality, of justice for all, cannot be deferred any longer.

“We see the existential threat of climate crisis poses to our planet and everywhere we turn – more severe floods, stronger hurricanes, more intense wildfires. We just have to open our eyes. We have just witnessed images that we never imagined – images that now we'll never forget. A violent assault on the US Capitol. An assault on our democracy. On our Capitol. A violent attack that threatened lives and took lives. We know now we must confront and defeat political extremism, white supremacy and domestic terrorism.”

These were not Democrats and Republicans going hungry, being evicted from their homes, losing their lives, but fellow Americans, fellow human beings.

“This is not a nation that can or will simply stand by and watch this. It's not who we are. It's not who faith calls us to be. In this moment, we cannot be timid or tired. We have too much work to do. And it is by our work, not just our words, that we're going to be judged.

“As tough as times are, I believe, as a matter of fact I know, that we are going to get through all this. We'll come out stronger for it. The Bible tells us: ‘Weeping may endure for a night, but joy cometh in the morning.’ We still have in front of us many difficult nights to endure. But we’ll get through them, together. We need one another. We need to lean on one another. Lift one another up, and with faith, guide us from the darkness into the light.”