France and Islamic terror: the theological roots of fanaticism 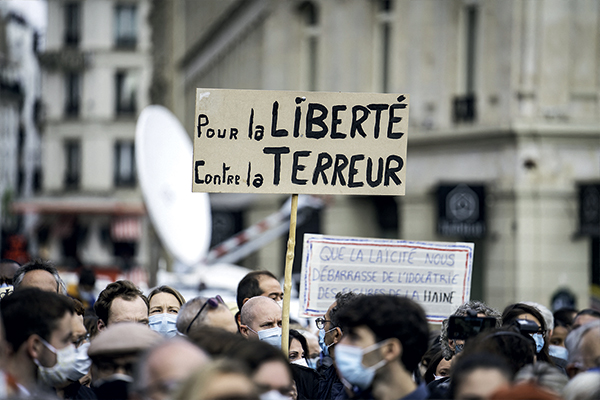 Rallies against terrorism and in support of Samuel Paty were held across France
Photo: PA/bePress/ABACAPRESS.COM, Gabrielle CÈzard

President Macron’s response to Muslim extremism looks like an updated version of the efforts of previous French leaders. It is time for a new approach

It’s happened again: a Muslim extremist, angered by the Charlie Hebdo caricatures of the Prophet Muhammad, has beheaded a French teacher who showed them in class. Samuel Paty was murdered as he left his school in a suburb of Paris.
And it’s happened again: the French state has launched a crackdown on Muslim extremists, rounding up contacts of the killer and vowing to shut down radical groups. It has also reached out to the law-abiding majority of French Muslims with proposals to create an “enlightened Islam”.
So what will happen next? French leaders have tried and failed to reshape Islam along more Gallic lines for the past three decades. Muslim extremists have taken over 250 lives here in the past five years, and there is no end in sight to the bloody series of killings. Criminals must be prosecuted; the French justice system is doing that. But so far the strategies designed to prevent further attacks have failed to address the roots of the phenomenon.

The French political class looks like a victim of its own success. In 1905, secularists won a long struggle against the then-powerful Catholic Church, separating it from the state. The resulting system, known as laïcité, has since become a template for defending ­­liberté, égalité, fraternité by keeping religion out of the public sphere. Laïcité basically worked. Its legalisms could be awkward, at times infuriating, but they set down guidelines most of the French – whether secularists or people of faith – are ready to follow.
But laïcité was developed before post-war immigration resulted in a Muslim minority in France of about five million, the largest in Europe, which has brought very different political, economic and religious tensions to those that had divided France 115 years ago.

Muslims have not become invisible in public life. Rich or poor, secular or pious, Muslims stand out as different, and are perceived as such. There is discrimination, a sidelined underclass has grown and issues such as women’s headscarves and dietary laws have become political footballs. And ironically, it is often the Right, rather than the anticlericalist French Left, who use the rhetoric of laïcité to denounce public expressions of Islam, from the wearing of burkas to the building of mosques.

Effectively tackling prejudice and income inequality is hard. It requires programmes lasting longer than just one legislative cycle, and laïcité rules out treating any religious group differently. Meanwhile, the 2015 attack on Charlie Hebdo that killed 12 staffers is being relived as a court in Paris tries 11 suspected accomplices of the Islamist killers. And last month a Pakistani immigrant gashed two people with a cleaver outside the satirical weekly’s former office in supposed revenge for its caricatures. So President Emmanuel Macron, who faces a re-election challenge from far-right leader Marine Le Pen in 2022, had a narrow path to walk in reacting to the latest terror attack.

Calls for an iron hand have come from the far-right and aggression against mosques and Muslims has increased. Last week two women in headscarves were stabbed and called “dirty Arabs” as they walked near the Eiffel Tower. Macron, who chose to be baptised as a Catholic at 12 but now considers himself to be an agnostic, has a deeper understanding of spirituality than most politicians. But his strategy for dealing with Muslim extremism sounds like an updated version of efforts that fell short in the past.

Understandably, his initial reaction focused on security. “Fear will change sides,” he insisted at an emergency meeting at the Élysée Palace. “Islamists must not be able to sleep peacefully in this country.” He has ­doubled down on the defence of French values, praising Samuel Paty as “the face of the Republic” in a moving eulogy at the Sorbonne in central Paris. Two weeks before Paty’s ­murder, Macron had outlined a broader ­strategy for dealing with extremist Islam that he has been working on since coming to office. His diagnosis is that the problem is “Islamist separatism”. According to a plan due to be presented as a draft law to the National Assembly in December, he wants to help create an “enlightened Islam” in France. An Institute of Islamology will be created to foster better knowledge of Islam and the Arabic language; imams will have to be trained in France; and home schooling will be severely restricted to avoid children being “indoctrinated”. Macron admits France has allowed Muslim ghettos to emerge and ignored warning signs as Islamist movements – he mentions Wahhabis, Salafis and the Muslim Brotherhood – had “progressively degenerated” into radicalism. But Macron’s plan does not include concrete ­measures to counter the prejudice and poverty that leave many Muslims marginalised.

Adrien Candiard, a 39-year-old French Dominican who lives in Cairo, where he is a researcher at the Dominican Institute for Oriental Studies, argues that France cannot understand radical Islamism without including religion among its sociological and psychological causes. In Du Fanatisme: Quand la religion est malade (“On Fanaticism: When Religion is Ill”), Fr Candiard turns a central tenet of laïcité on its head. “Fanaticism is not the consequence of an excessive presence of God,” he writes, “but the mark of his absence.”

Secular explanations are not sufficient to explain the emergence of Islamist violence. In Candiard’s view, Muslim extremists replace God with idolised versions of his laws that they insist on enforcing. Accusing a Muslim of shirk (idolatry) is so serious in Islam that radicals believe it merits death. Candiard does not advocate that outcome, but he uses an Islamic analysis to show this radicalism is partly a theological problem. This goes beyond the state’s strictly secular analysis and the routine mainstream Muslim refrain that extremists “are not real Muslims”.

“Our collective ignorance of the nuts and bolts of theology leaves us absolutely disarmed when confronted with simplistic or seductive religious discourse,” Candiard writes. One can only “protect youths from the recruiting sergeants of jihadism” by giving them serious Islamic arguments to protect them from being “fooled by the first huckster who uses promises of eternal life to attract them”.

France needs something more than déjà vu. Macron’s response to the problem of Islamist violence should go beyond ever-tighter crackdowns and misguided efforts to reform a religion. The solution is not to focus on creating an elusive “French Islam” but to address the poverty and discrimination that create the conditions that foster radicalisation and to take seriously the theological nature of the religious fanaticism the extremists embrace.

Tom Heneghan writes for The Tablet from Paris.