Francis in Iraq - entering the labyrinth 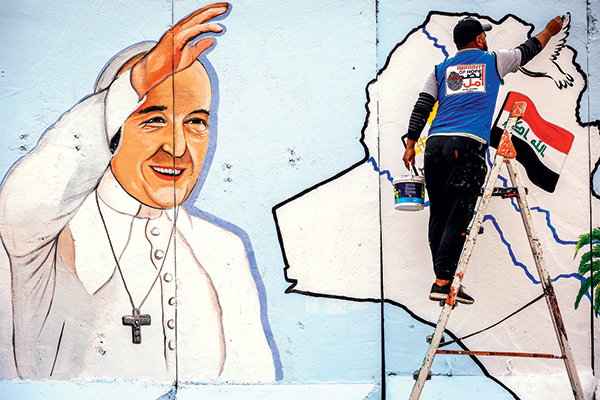 With the Pope preparing to visit the war-torn country, a veteran Middle East correspondent looks at the prospects of a return to security in a nation haunted by its blood-soaked past

I have always admired Iraqis for the way they have struggled to survive – though many of them failed to do so ­successfully – over 40 years of violence and fear. Nobody living in Iraq during that time of war and deprivation could escape ­having an interesting life. Few peoples in the world have suffered so much and for so long as them. A friend in Baghdad once told me that “no Iraqi can be proved to be paranoid because in our country there is always ­something to be frightened of”.
Iraq is a diverse place, permanently divided between different communities – Shia, Sunni, Kurds, Christians, Yazidis – each with their own religious or ethnic culture. But Iraq was never a melting pot, because the pot never melted and each community carefully guarded its identity and traditions. An Iraqi might be a Syriac Catholic from Qaraqosh on the Nineveh Plains outside Mosul in the north, or a tribal Shia from the marshes outside Basra in the south. “Two Iraqis, three sects”, used to be a joke among Iraq’s neighbours.

Foreign governments have almost invariably failed to understand the country, frequently paying a high price for their ignorance – though not as high as that paid by Iraqis themselves. At the time of the US-led invasion of 2003, President Bush and Tony Blair did not see, what was obvious to every Iraqi, that overthrowing Saddam Hussein meant replacing Sunni dominance with Shia dominance and this was unlikely to happen without violence.

What the most pessimistic prophets of doom did not forecast was the savagery with which this conflict would be fought, or the length of time that it would go on. The Shia majority have since emerged as the winners, though they preside over a ruined land, and the Sunni have lost almost everything, their greatest city, Mosul, shattered in a nine-month siege. Christians and Yazidis have been ground down by the relentless violence, their vulnerability as minorities exposing them to predators on every side. I once met a Christian girl, a student at Baghdad University, who told me that she was wearing a headscarf because her parents hoped it would make her look like a member of a powerful Sunni tribe and that this would deter potential ­kidnappers.
I used to advise Christians friends to try to stay on in Iraq if they could, because the life of a refugee, even for somebody who had money and connections, was usually worse than it looked. But when Islamic State (IS) captured Mosul and Qaraqosh in 2014, I began to doubt if my urgings to my friends to stay were realistic or responsible. IS generally allowed the Christians to flee (unlike the Yazidis), but the danger was still acute.

Pope Francis will understand this when he visits the main church in Qaraqosh, its walls scorched black by fire, and the former Christian enclaves in Mosul. For Christians to stay, they will need more than verbal assurances of security from the government in Baghdad. Not that this is worth very much since Iraqis have a saying that there are four equal powers in the country: the government, the marja’iyyah (Shia religious hierarchy), the tribes and the Hashd (Shia militias). Dodging between these competing authorities is not easy for anybody and particularly not for Christians.

Iraqis tend to be pessimists and with good reason, but this gloom should not be all-­pervasive. Physical security in Iraq has, in fact, got much better in the last three years since the defeat of IS, though this is not entirely complete. When sectarian killings were at their worst in 2006-07, 100 people were being slaughtered every day. Young men were frequently targeted and would sometimes have a small symbol, such as an olive tree, tattooed on their skin so that their bodies could be identified, even if their faces were mutilated beyond recognition by their killers.

Given this blood-soaked past, it is scarcely surprising that people in Baghdad are only slowly readjusting to the ebb of violence since 2017. As recently as this January, 32 people were killed by two IS suicide bombers in the central market in Baghdad. Fear recedes slowly and Iraq has seen too many false dawns to abandon habits of wariness and suspicion. I was travelling in the countryside near Taji, formerly a Sunni insurgent stronghold an hour’s drive north of Baghdad, a couple of years ago. A farmer told me: “I know people from here who have not been to Baghdad for 10 years because they are frightened of being picked up at government checkpoints.” Driving back from Taji, somebody in the car abruptly told me to “take off your seatbelt – no Iraqi ever wears one and it identifies you as a foreigner”.

I know that itch of constant anxiety about one’s safety. As security deteriorated after 2003, I would drive around Baghdad in one car, deliberately grubby and beat-up, looking to avoid attracting attention. A second car would follow behind to see if we were being followed and, if we were, to warn us by hand radio. I would hang a couple of shirts from a hook by the window, as people do when they are returning from the dry cleaner, but the real reason was to make it difficult to identify me as a foreigner in the back seat of the car, though without suggesting that we had anything to hide.

Better security meant that people could focus more on the innumerable other things that were wrong with Iraq. Since I first came to Baghdad in 1977, the physical appearance of the city has changed remarkably little because there are so few new big buildings. Resources were poured instead into wars or stolen by those in charge of reconstruction. An infrastructure designed for two million people in the capital 40 years ago is now used by four times as many. The result is an overall sense of shabbiness and the worst traffic jams in the world. Social distancing, even as the Covid-19 pandemic rages, is impossible.

The theft or waste of money when oil prices were high is having a disastrous impact today. About 400,000 young people enter the labour market each year and there are few jobs for them. It was the unemployed, both educated and uneducated, who were at the forefront of the mass protests that started in October 2019 and may break out again at any time. In Sadr City, the great Shia working-class enclave in Baghdad, the divorce rate is going up because jobless husbands cannot support their families. The best jobs are in the army and police, where an officer earns three times as much as a teacher, but these have all been snapped up. Indeed, this crisis is going to get worse rather than better since the government can no longer afford to pay the 4.5 million Iraqis, out of a population of 40 million, who depend on the state for their pay.

The Christian community may be the most depleted by emigration, but the impulse among all Iraqis to flee the country is strong. Once, when buying a local phone in the Karrada district in Baghdad, I met a young shopkeeper named Rami who was wearing a blue T-shirt with the slogan “I Choose Leave” printed on the front in large white letters. The T-shirt had been intended for the UK’s EU referendum in 2016 but, perhaps because of over-supply, had ended up being sold in Baghdad, where its slogan had an entirely different implication. Rami told me that he understood the meaning of the English words on his T-shirt and added that he certainly would choose to leave Iraq if he ever got the chance.

The one piece of good news for Iraq is that, with President Joe Biden in the White House, there is less likelihood of a war between the US and Iran fought out on Iraqi soil. The assassination of Iranian General Qasem Soleimani, the director of Iran’s intervention among its Middle East neighbours, by a US drone at Baghdad airport on 3 January 2020 had suggested that this might well happen within a matter of days. War has been averted but peace has not come, and until it does – and for all Iraqis – the exodus of Christians will continue unabated.

Patrick Cockburn is a Middle East correspondent for The Independent and has worked previously for the Financial Times. He won the Martha Gellhorn Prize in 2005, the Orwell Prize for Journalism in 2009, and was Foreign Affairs Journalist of the Year in British Journalism and Foreign Reporter of the Year in the Press Awards for 2014. This article contains material from his most recent book, War in the Age of Trump: The Defeat of Isis, the Fall of the Kurds the Conflict with Iran, published by Verso Books.