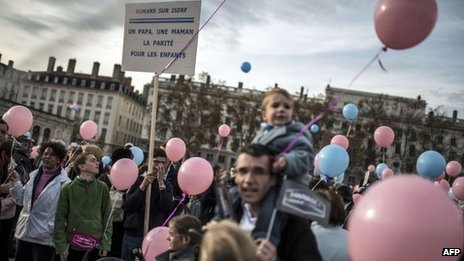 There were marches in Lyon (pictured), Toulouse and Marseilles, as well as Paris
Continue reading the main story

Tens of thousands of people have protested in France against plans to legalise same-sex marriage and allow gay couples to adopt.

Police said at least 70,000 took to the streets in Paris; there were other demonstrations in the cities of Lyon, Toulouse and Marseille.

They included Catholic groups and other backers of traditional family rights.

President Francois Hollande has promised to change French law so that gay and lesbian couples can marry.

Despite opposition from more than 1,000 mayors and the Catholic Church, his socialist government approved a bill on the issue earlier this month which will be debated by parliament in January.

France already allows civil unions between same-sex couples, but extending their rights was a campaign pledge of Mr Hollande before he was elected in May. 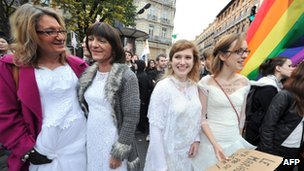 "A child needs a father and a mother, he needs the paternal and the maternal side and with this bill that might not be possible any more," said one protestor, Marthe Vignault.

"That's the way it is and we can't go against nature."

The issue is one of the most divisive Mr Hollande has faced, correspondents say. The head of the French Council of Catholic Bishops, Cardinal Andre Vingt-Trois, recently described gay marriage as "the ultimate deceit".

At present only married couples - not civil union partners - can adopt in France.

A number of European nations, including Sweden and the UK, already allow gay adoption.