From inquisitor to saint: Oscar Romero 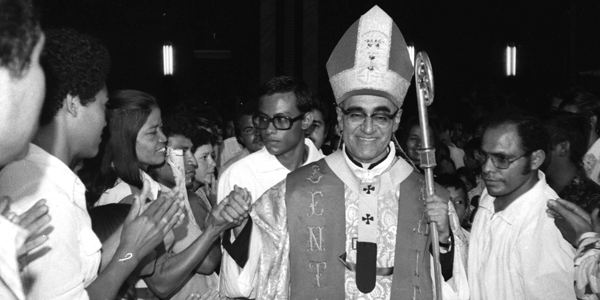 It was a horrific re-enactment of the death of the Archbishop of Canterbury, Thomas Becket in 1170. On 24 March 1980, Archbishop Oscar Romero of San Salvador was murdered by an assassin’s bullet as he celebrated the Eucharist. For the previous three years, he had denounced injustices in his country and defended human rights.

Romero had garnered international respect for his efforts, earning a Nobel Peace Prize nomination in 1979. However, he had also sparked vehement opposition from the oligarchy whose economic interests he challenged and the military whose violent repression of any resistance meant thousands kidnapped, tortured, and executed.

Things were no different inside of his own Catholic Church. For while many of the poor faithful thronged to the cathedral to hear his homilies, wealthy Catholics would take out ads in local newspapers declaring him a communist or the Devil’s aide. Priests, nuns, and catechists involved in the Church on the ground saw the archbishop as their champion, while members of the Salvadoran bishops’ conference saw him as a puppet who was leading the Church into perdition.This division within the Church explains why, in an era that saw more saints declared than in all previous Christian history, Romero’s canonisation kept getting delayed.

Officially, the final hurdle was clarifying the nature of Romero’s murder. Was it a martyr’s death due to “hatred of the faith” or was it merely political? In reality however, the twists and turns of the process revolved around the concern of many in the Vatican not only about Romero himself but about liberation theology and the extent to which he embodied it. Untangling this relationship tells us much about the new saint and how his canonisation represents a de facto landmark recognition of liberation theology as an important way for modern believers to live a faith that addresses the social crises of our times.

Liberation theology blossomed in El Salvador much like its rich coffee beans—mainly in rural areas and harvested by poor campesinos who eked out a bare subsistence under harsh conditions. In towns such as Suchitoto, Tecoluca, and Aguilares, pioneering priests such as Inocencio “Chencho” Alas, David Rodriguez and Rutilio Grande formed small groups in which people gathered to read the Bible in order to shine light on their own reality. What they never expected was how that reality would in turn teach them to understand the Bible and their faith in new ways.

The most important effect of liberation theology was to end the fatalism that had characterised colonial Catholicism for centuries. No longer did these campesinos understand their poverty and the malnutrition of their children as ordained by God. No longer was faith understood as the mere endurance of this life’s hardships in the hope of relief in the next. The Gospel truly became the “good news” of God’s will that all human beings should flourish in peace and in just relationships in this life as a foretaste of the fullness in the next. Believers did not just “pray, pay and obey”. They organised and worked to make the world look more like the reign of God that Jesus preached.

The Second Vatican Council (1962-1965) led to dramatic changes to global Catholicism. However, it was the 1968 meeting of Latin America’s bishops in Medellín, Colombia, that marked the birth of liberation theology.  Medellín’s trailblazing documents on justice, peace, and poverty were followed in 1971 by Gustavo Gutiérrez’s A Theology of Liberation. It gave a name to a movement that would spark hope across the continent.

In El Salvador, Archbishop Luis Chávez (1938-1977) had embraced the direction given to the Church by Vatican II and Medellín. He encouraged young priests to go to the Latin American Pastoral Institute (IPLA) in Quito, Ecuador, and study the Church’s new pastoral initiatives. What started with bible studies blossomed into small base communities and cooperatives. Educational centres were established to train the campesino leaders, the Delegates of the Word, who were emerging from the base communities. In 1970, a pastoral week in San Salvador brought together these catechists, Religious, and priests from around the country. They would be the nucleus for the Church’s new direction.

Though he attended the pastoral week, Oscar Romero, then auxiliary bishop of San Salvador, was wary of the “Medellinistas,” and in the first half of the decade, he would become an outspoken critic. Behind the scenes, he sent a 1975 memo to Cardinal Sebastiano Baggio, Prefect of the Congregation of Bishops, decrying the politicisation of El Salvador’s priests. As one biographer put it, Romero during this period was a “little inquisitor”. The next few years would see a dramatic change.

In 1974, Romero was named bishop of Santiago de María, a rural diocese in coffee-growing areas that saw campesinos come from around the country to find work at harvest time. Conditions were harsh, the winter nights in the hills were cold, and the workers were often abused by landowners who treated them like animals. It was here that Romero began to see the world with new eyes. As he travelled around his diocese, the reality of poverty struck him like never before.

One of the leading formation centers for lay catechists, “Los Naranjos”, operated in his diocese. In addition to courses in the Bible and church teaching, there were also courses on history, politics and economics. The campesinos were invited to live their faith with a new consciousness about the world around them. Centres such as Los Naranjos became an epicenter for a liberation theology characterised by this pastoral approach.

Though initially deeply suspicious of the teaching going on at Los Naranjos, Romero began to see the sincerity of the faith shown by teachers and students alike. Then, in June of 1975, five farmworkers who had been trained at Los Naranjos were savagely massacred in the village of Tres Calles. Romero spoke to the widows whose husbands and sons were murdered. In a private letter to President Molina, he wrote about how their tears had broken his heart. He began to realise the underlying causes of poverty and injustice. However, at this point he could go only so far. When priests of the diocese urged him to take a public stand on the massacre, he demurred. He preferred to work privately in back channel communications, lest there be any scandal.

The seeds had been planted and the roots were taking hold, but only after another dramatic event would the world see the blossoming of the internal changes going on in Romero’s life. On 12 March 1977, the Jesuit priest Rutilio Grande was murdered along with Nelson Lemus and Manuel Solorzano. For many in the base communities, it was an almost apocalyptic moment. Their beloved “Fr Tilo” had been taken away. Little did anyone expect that the one to inherit Grande’s mantle would be the new Archbishop of San Salvador.

Romero made two bold decisions after the Grande assassination that revealed a changed man. He made the memorial Mass for the three victims held on the Sunday after their death the only Mass in the entire archdiocese. Moreover, he declared that he would not attend any governmental events until the murders were investigated to his satisfaction.

This meant he would boycott the inauguration of the incoming president, General Humberto Romero. Fellow bishops were furious. They blasted him for “politicising” the faith. Romero responded by asking when it had become not political for an archbishop to bless the inauguration of a president. Romero had come to understand the powerful ways that the Church had been used to legitimate an unjust state. The remainder of his ministry would be spent upending that role.

Oscar Romero was no professional theologian. He did not publish books, nor did he hold a university position. However, in his three years as archbishop, the homilies Romero gave in the cathedral every Sunday – broadcast live on the radio and listened to avidly throughout the country – combined the most honest reports and assessment of what was really happening in El Salvador with a powerful theological vision. The key to that vision lay in his overcoming of the dualisms in the theology he had learned decades earlier. Rather than fleeing the world, Romero discovered that it is precisely in the world where God’s presence is discovered. “The element of transcendence that ought to raise the Church toward God,” he wrote, “can be realised and lived out only if it is in the world of men and women.”

Time and again, Romero would emphasise that human or earthly liberation, though not identical with the full liberation that Christianity preached, was not separate from it either. For this reason, believers need to be active in making the world more just. “Those who want to be co-partners in the promises of eternity,” he wrote, “have to collaborate with God in establishing justice, peace and love in this kingdom on Earth.”

For Romero, the model for how to seek this liberation was Jesus Christ himself. From the Gospel accounts of Jesus’ ministry, Romero saw three important criteria for the Church’s mission in the world. First, it must denounce sin. Of course, this term signified personal failings such as greed and selfishness. But Romero’s great realisation was that sin has a social dimension. The repression he saw in Santiago de Maria, which lay behind the murders of Grande, Solorzano, Lemus and so many others, and the causes of the poverty that condemned the campesinos to harsh lives and early deaths, all were the consequences of a system that had to be denounced as sinful.

In light of that “structural sin”, the Church, like Jesus, must proclaim a good news, particularly to those who are poor or marginalised. Commitment to solidarity with the poor has to take centre stage in the life of faith. It must make a preferential option for the poor, even if, when the Church does act in solidarity, it endures persecution.

Romero paid the ultimate price for living out his faith. His sanctity and life of prayer resonate with so many of the saints from the past. However, his legacy speaks to our time in a special way. His realisation of the reality of structural sin inspired a profound discipleship dedicated to human liberation.

The weakest in society were the guide to his ministry. He did not forge a “middle way” between an oppressive military on one hand and Marxist guerrillas on the other. He committed himself and his Church uncompromisingly to the liberation of the poor, and in that commitment revealed what true faith looks like in the world today.