Girls are growing up in a "moral abyss" where being  dressed in "mini-me" sexy clothing and wearing make-up is acceptable, a schools leader has said.Continue reading the main story 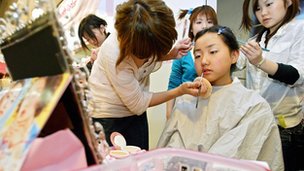 Parents who dress children in such clothes have themselves been let down, Girls' School Association president Dr Helen Wright argued.

Such parents had grown up without "any idea of how to bring up a child", she said.

Only education could break the cycle, she added.

Speaking at her association's annual conference in Bristol, Dr Wright said she had long been concerned with the "seeming erosion of the innocence of childhood".

And she said schools and parents were in the forefront of the battle against inappropriate images that were everywhere.

The head teacher of St Mary's Calne school in Wiltshire added: "In what sort of twisted reality is it acceptable to run pole-dancing classes for young children and advertise them with pictures on the internet, for instance?

"What hope have we got of safeguarding our children's sacred childhood if they are knocked off their feet on the nursery slopes of life by an avalanche of images and malign influences?

"And make no mistake, this is what is happening."

She added: "It is time to take up the drawbridge of the liberal dogma of the past which has left us with the moral abyss of the present."

She continued: "If parents can't see anything wrong in dressing up their children in 'Future Wag' T-shirts and letting them wear make-up, high heels and 'mini-me' sexy clothing, then something is intensely wrong in our society.

"I have no doubt that these are the parents who have been failed by the education system themselves."

Last month, David Cameron held a summit at Downing Street on the commercialisation and sexualisation of childhood.

It follows the publication of a report into the issue by the chief executive of Mothers' Union, Reg Bailey.

Dr Wright also criticised programmes like the X Factor, where she said contestants were "encouraged to be at each other's throats".

She said: "Qualities such as bullying and arrogance are glamorised and become synonyms for ambition and drive.

"Young people look up to these so-called stars, who have themselves been catapulted into a spotlight which can be far too much for them."