How a murdered French priest has united Catholics and Muslims 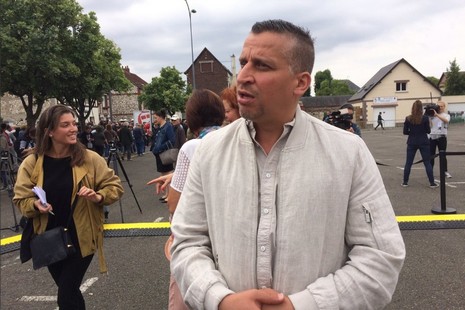 Abdelkader Bekhedda, 42, a Muslim who belongs to ACRIP, an association for the promotion of interreligious dialogue, at Fr Hamel's remembrance service in Saint Etienne du Rouvray. / Julien Duriez

The event was full of spontaneity. The plaque in honor of Father Jacques Hamel was unveiled in Saint-Etienne-du-Rouvray by Emmanuel Macron and the Archbishop of Rouen, Dominique Lebrun.

Moments after the ceremony, a parishioner called out to the head of the local mosque of the small town in Normandy, which is home to a significant Muslim population:

“I’ll come around to see you. When's the best time to call in?”

“We’re always there during prayer time, you’d be welcome to drop in”, replied Mohammed Karabila with a broad smile. Karabila, also president of the Regional Council of Muslim Faith, added:

“Makrouts are delicious! We should really get to know each other better!” exclaimed the Saint-Etienne parishioner.

After the solemnity of the mass in commemoration of the death of Father Hamel, exactly one year after his assassination, the ambiance became more relaxed and people started talking amongst themselves. Almost 500 people followed the proceedings on a big screen set up in the square adjacent to the small stone church. In the crowd were parishioners, regular church-goers, atheists, and members of the Muslim community, some in solidarity, some simply curious.

Originally from North Africa, Miloud, 79, dressed in a gray suit and checked hat, came from a nearby town to pay homage.

“He was a good man, he didn’t deserve to die," said Miloud.

The Catholic community of this small Normandy town has been indelibly marked by the assassination. But, perhaps paradoxically, it has also brought Christians and Muslims together.

“The terrorists wanted to divide us, but they haven’t succeeded, it has had the opposite effect. There are also positive consequences," said Abdelkader, a 42-year-old Muslim, and active member of ACRIP (Association Culturelle Religieuse Intercommunautaire –Intercommunity Cultural and Religious Association).

ACRIP promotes inter-religious dialogue and was founded in the 1980s in response to John Paul II’s Assisi appeal.

As Father Jacques was being assassinated, Abdelkader, a practicing Muslim, was at the prefecture submitting a request for the right to hold a protest bringing Muslims and Catholics together, he recalls.

“At that point, public authorities weren’t particularly interested in us. Now, politicians come to find us…”

Nodding his head in agreement is Henri, 82, standing next to Abdelkader. This former bookshop owner, who ran La Procure de Rouen with his wife for fifteen years, is still moved by the ceremony and the speeches given.

“It’s incredible to see how an atrocity can have positive consequences," said Henri, a former priest himself. "It spreads out in all directions and touches everyone, including Muslims and the communist mayor Hubert Wulfranc, who asked, ‘but what is it that nourishes these Christians?’."

The association of which Abdelkader and Henri are both members is preparing to start running “Worship Tours”, to raise awareness and present different religions to the public, says Abdelkader.

“It will be a way to keep this activity going and turn it into something long lasting.”

The current mayor, Joachim Moyse, was clearly affected by the ceremony. When children return to school this September, he has plans to start running two new educational programs. One of them will take place on the site where the plaque commemorating Father Hamel stands. There is a metal disk on which thirty statements from the Declaration of the Rights of Man are engraved and marble benches surrounding it where students can sit.

“We have to talk about it and do as much as much as possible in order to show that we can live together peacefully and eventually try to unite again after the terrible shock that our community has been through”, said Moyse.