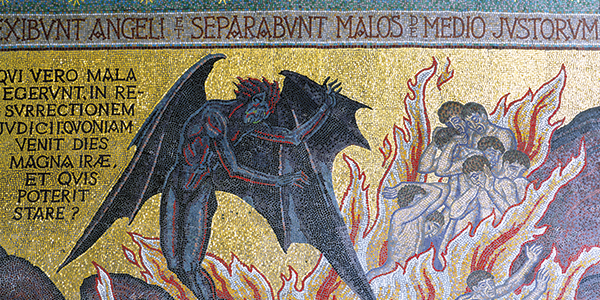 There is an opportunity – and a desperate need – for churches that are architectural gems to be restored. These heritage buildings may serve as places of prayer and quiet reflection for all

Times have changed: the church of All Saints, Barton upon Irwell, once had a tranquil riverside setting beside the estate of one of Manchester’s great recusant families, the de Traffords. Now it is next to the Manchester Ship Canal and the biggest industrial estate in Europe.

Sir Humphrey de Trafford spared no expense, hiring the foremost Catholic architect of the day, Edward Welby Pugin, son of Augustus Welby Pugin, to build a parish church that incorporated the family’s chantry chapel. Designed in the neo-Gothic style with soaring arches in stripes of pink and white stone, it has a Grade I listing and is described by Pevsner as the architect’s “masterwork”.

The sanctuary is particularly beautiful, with a ceiling painted in gold leaf, and a graceful high altar of white Caen limestone decorated with precious marbles. A wall painting shows Edward Pugin himself, among local worthies, kneeling in prayer and holding his plan for the church.

Today, thousands drive past this church each day with no inkling of its glorious interior. All Saints is no longer a parish church, and its custodians are the Greyfriars, who once used the site as their novitiate and centre for printing The Crusader magazine. The church is open for Mass just twice a month.

The Guardian, Fr Christopher Shorrock OFMConv, one of two Franciscan friars who occupy the huge presbytery, told me that All Saints is a nightmare to maintain. There are currently problems with the roof drainage system and the heating, which is making the church too cold to use in winter.

But there is hope, because Greater Manchester, along with Suffolk, are the areas chosen for a government-funded pilot scheme designed to conserve listed places of worship. Under the Taylor Review Pilot, officers appointed by Historic England are advising congregations about maintenance and repair of their buildings and encouraging them to use them for purposes other than worship. Opening up churches for community use was a key recommendation of a review, chaired by Bernard Taylor, published a year ago into the funding and sustainability of listed Church of England buildings.

Fr Shorrock says that the two officers from the Taylor pilot were bowled over when they visited All Saints. He is hopeful that he will get the maximum £10,000 repair grant that can be awarded under the scheme, though it is a drop in the ocean compared with what is needed. The potential for wider community use of All Saints is limited, though Fr Shorrock would happily host open days to bring in more people.

Under current policy, it is doubtful whether this alone would attract funding from the biggest grant-giver, the Heritage Lottery Fund (HLF). As with the Taylor Review, “community use” is the order of the day at the HLF, which makes grants conditional on achieving this. It has got rid of its dedicated grant scheme for repairs for places of worship, obliging churches to compete for funding with secular organisations.

The HLF also demands elaborate education and public engagement programmes that most churches do not have the resources or ability to provide. The policy puts Catholic churches at a disadvantage. They are sacred spaces and, unlike Anglican churches, are not normally used for commercial or community activities.

There are numerous examples of listed Catholic churches losing out on the “community use” criteria. One is St John the Baptist, Rochdale, a Grade II* 1920s red brick church in the Byzantine style with glittering mosaics covering every inch of its massive sanctuary and apse. Parish priest Fr Michael Johonnett closed the church for several weeks when loose plaster began to fall from the vast, shallow, concrete dome.

Though deemed safe for the moment, £750,000 is urgently needed to stop the water getting in. Even if the HLF were to reverse its decision, the local Catholic community would still have to find £100,000, a tall order in an area of high deprivation with a transient, largely immigrant population.

The church will reapply for an HLF grant and Fr Johonnett is busying himself with strengthening community ties, including with the local mosque, with the aim of developing joint projects to support asylum seekers and open a food bank. He says: “I have no problem with developing the community side, so long as the church is treated as a sacred space. I would like for it to be opened up so that people can come in and pray. For the congregation we have, the church is too big.”

The Bishop of Salford, John Arnold, cites St John’s as an example of the problems facing historic churches in the inner city. At the launch of the Taylor pilot last September, Bishop Arnold took the opportunity to stress that Catholic churches should not be put to secular uses.

“Churches can serve the needs of wider audiences by simply being churches, offering a spiritual space to all comers,” said Arnold. “Particularly as places of beauty, quiet and peace they can provide much value to visitors of all faiths or none, particularly if accessible to all throughout the day, away from the noise and constant secular distractions of our everyday lives.”

That is certainly the case with St Mary’s, popularly known as the Hidden Gem, the second church to be founded in Manchester in modern times, and another architectural marvel. Tucked away in a narrow street and hemmed in by taller buildings, it is a haven of peace in the city centre. The lunchtime Mass on Tuesday was busy when I visited with Salford Diocese’s property manager, John Corrigan.

Here too, there is water coming through the roof in one corner. Corrigan welcomes the Taylor pilot as a way of raising awareness of the need for funds to pay for urgently needed repairs at churches such as the Hidden Gem. Many nineteenth- and early twentieth-century Catholic churches have reached a point where roofing materials are failing and they need their first major overhaul.

However, the diocese has attracted major grants towards the restoration of its cathedral church, dedicated to St John the Evangelist. The First World War Centenary Cathedral Repairs Fund, an initiative of the former Chancellor, George Osborne, awarded £573,000 for major roof repairs. The cathedral has a fine First World War Memorial Chapel, including a Passchendaele Window.

The cathedral was built as a large church two years before the restoration of the hierarchy in 1850 and its scale reflects the confidence and ambition of Catholics at the time. Architectural historian, James Crowley, a member of the cathedral’s fabric committee, wants the restoration of the interior to reference some of this confidence. He has a thick file of old photos that show the cathedral prior to a series of post-Vatican II renovations that saw the destruction of several fine Victorian features, including the high altar, carved stone reredos and pulpit.

Crowley would love to restore a wall painting that traces the lineage of the Catholic bishops; it was obliterated by masonry paint applied throughout the interior. Another proposal is to redesign the sanctuary, which was moved to the crossing in 1972 in order to put in more pews. The cathedral congregation is growing and there is standing room only on major feast days.

Crowley is an ardent supporter of Bishop Arnold’s plan for mission parishes and for the integral part to be played in this by the diocese’s 32 listed churches. As a member of the grants committee of the National Churches Trust, Crowley is alarmed by the variety of alternative uses proposed for churches. He points out that the only example of Jesus getting angry in the Gospel is when he overturns the tables of the moneychangers: “He objected to the secular use of the temple. It is a terrific argument. We have a demonstration from Christ himself of how our churches should not be used.”

Elena Curti is a former deputy editorof The Tablet.