How monks used schools to aid social mobility before the Reformation 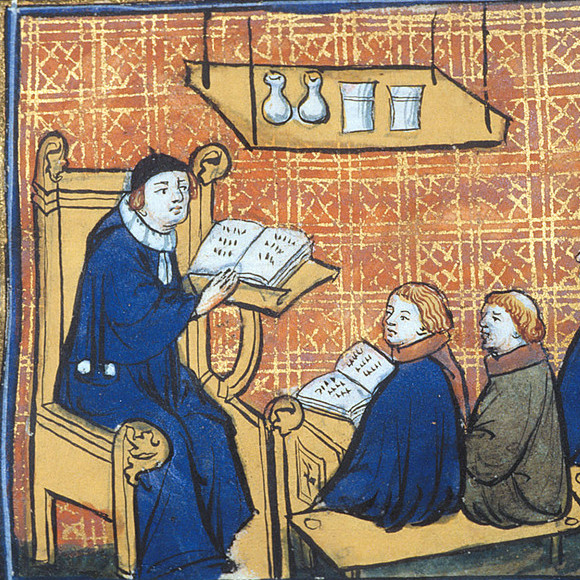 Detail of a miniature of a lecture, From 'On the property of things' by Bartholomaeus Anglicus, translated by Jean Corbechon - Public domain via Picryl

This week sees the start of a new school year, pandemic permitting, of course. It’s the perfect excuse to explore the role of medieval monasteries in education, or to be specific, the part monasteries played as providers of what we’d now call a secondary education (watch this space for a column on monks and universities).

As I’ll show, between the 13th and 16th centuries monastic schools across the land were the source of a first-class, free education. Their pupils were endowed with the learning and polish necessary to transcend the disadvantages of lowly birth and have a chance of social mobility in a rigidly hierarchical society.

From the Anglo-Saxon age onwards, monasteries provided schooling to their novices and monks. Starting in the late 13th century, their educational offer expanded to encompass the teaching of outsiders. This was very much an extension of the charitable activities of the monasteries and the schooling was via monastic almonries. These were the buildings used to distribute alms, or charity, to the poor. Male monasteries confined such pedagogical activities to boys – I’ll get to nunneries presently – and the recipients of a free monastic education were known as “clerks” or “boys” of the almonry.

In the 1260s, Gisborough Priory, Cleveland, became one of the first monasteries to found an almonry school. They proliferated in the late 13th century and the explicit intention was to provide free schooling for poor, even destitute, boys and foundlings.

Boys educated at almonry schools were most definitely not part of the monastic community. They didn’t live under vows, were free to leave whenever they chose and were lodged in the outer courts of monasteries, separate from the claustral nucleus where the monks or canons lived and prayed. The almonry school at Durham, for instance, was located in a garret adjoining the cathedral priory’s gatehouse. Diet consisted of a daily allowance of bread and first dibs on any food left over from the monastic refectory and destined for distribution to the poor. One wonders how much remained once the appetites of growing boys had been satisfied.

Teachers at almonry schools were almost always specially hired masters, and by the 15th century their number included university graduates. The school day was long and discipline harsh.

The usual age of admission was around 10 to 12 years. If Ely and St Albans are anything to go by, boys were allowed to remain for anything up to five years. Just how literate the boys were at matriculation is open to question, but once admitted the curriculum revolved around the teaching of Latin, proficiency in which was essential for any career in the medieval world. There’s also some evidence that schooling extended to the teaching of English; for instance the Missal from a Yorkshire Cistercian abbey I discussed in my previous column has end pages scavenged from a Vulgaria, or English grammar, a staple of the medieval schoolroom. In common with the pages of many a modern textbook, they’re covered in untidy schoolboy scrawls and doodles, or to use the nerdy term, “pen trials”.

The boys were also taught “good manners”. Forget chicken legs being tossed over shoulders – decorum mattered very much in the Middle Ages and if you were going to get ahead in medieval society you had to know how to behave in the presence of your social betters.

By the 14th century, the monasteries wanted something in return for all this free board and tuition. Boys from almonry schools were therefore required to assist ordained monks during the singing of private daily Masses, helping at the altar and chanting the responses. Their services were also called upon as choristers during the singing of the monastic liturgy, especially the daily Mass in honour of the Virgin. As many as 77 monasteries are known to have established “song schools” where boys received special instruction in plainsong, and from the mid-15th century, elaborate polyphony. Doubtless used during such instruction is a slate from Battle Abbey, Sussex, which has the distinctive five-line musical stave of late medieval polyphony scratched onto it. Financial accounts record that the abbey was purchasing polyphony from the Chapel Royal in London, suggesting that the boy choristers were singing music fit for a king.

Indeed, the alumni of almonry schools could go on to great things. William Ebchester, who was elected prior of Durham Cathedral Priory in 1449, had been an almonry boy there and Stephen Sagar, last abbot of Hailes Abbey, Gloucestershire, started his monastic career as schoolboy at Whalley Abbey, Lancashire. Others became high-ranking officials and rich farmers.

The better off also looked to the monasteries for an education for their progeny. The medieval equivalent of pushy parents blagged places at almonry schools. The well heeled placed their teenage sons in the households of abbots and priors in the expectation this would secure the learning, polish and connections needed to flourish as a member of the medieval one per cent.

Monasteries were also founding or supporting free grammar schools in neighbouring towns. Bury St Edmunds and Evesham are examples, and the monks of Jervaulx Abbey, Yorkshire, paid the wages of a master at a grammar school in Durham.

Let’s not forget the nunneries. There may have been as many as 50 convent schools in medieval England. Unlike the almonry schools, admission was dependent on the ability to pay hefty weekly fees. Pupils were therefore drawn from the wealthier sections of society. Education consisted of learning the ABC, prayers in Latin and like the almonry boys, decorum. In the 1530s, nunneries were praised for bring up the daughters of the Yorkshire gentry “in virtue”.

It wasn’t just girls who received a medieval education. Thomas Cromwell entrusted the tutelage of his beloved son Gregory to Prioress Margaret Vernon at Little Marlow Priory, Buckinghamshire. This didn’t stop Thomas from overseeing the extinction of the English monasteries and with them as many 5000 free school places and their attendant opportunities of social advancement for the poor. That’s a pretty damning statistic and casts some doubt on claims that high-minded ideals of social reform were behind the Dissolution of the Monasteries.