Pope Francis allowed Clelia Manfellotti to move around undisturbed clapping and dancing on the stage. 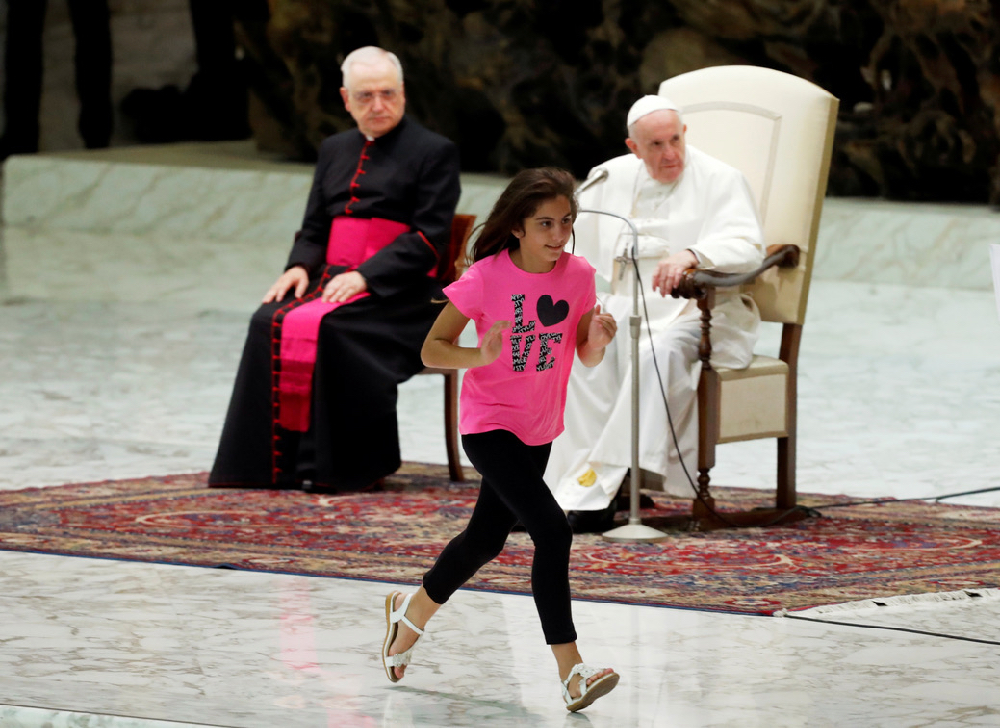 Christians who focus more on being superficially close to the church rather than care for their fellow brothers and sisters are like tourists who wander around aimlessly, Pope Francis said.

People "who are always passing by but never enter the church" in a fully communal way of sharing and caring engage in a sort of "spiritual tourism that makes them believe they are Christians but instead are only tourists of catacombs," the pope said Aug. 21 during his weekly general audience.

"A life based only on profiting and taking advantage of situations to the detriment of others inevitably causes inner death," he said. "And how many people say they are close to the church, friends of priests and bishops yet only seek their own interests. These are the hypocrisies that destroy the church."

During the audience, Clelia Manfellotti, a 10-year-old girl from Naples diagnosed with autism, walked up the steps to where the pope was sitting.

The pope told his security detail to "let her be". He said God speaks through children, prompting the crowd to erupt in applause. While greeting the Italian-speaking pilgrims at the end of the audience, Pope Francis reflected on the young girl who is "a victim of an illness and doesn't know what she is doing".

He said: "I ask one thing, but everyone should respond in their heart: 'Did I pray for her; looking at her, did I pray so that the Lord would heal her, would protect her? Did I pray for her parents and for family?' When we see any person suffering, we must always pray. This situation helps us to ask this question: 'Did I pray for this person that I have seen, (this person) that is suffering?'"

In his catechesis, the pope continued his series of talks on the Acts of the Apostles, reflecting on the sharing of goods among the first Christian communities.

While sharing in prayer and the Eucharist united believers "in one heart and one soul", the pope said that the sharing of goods helped the early Christians to care for one another and kept away the scourge of poverty.

"In this way, 'koinonia', or communion, becomes the new way of relating between the disciples of the Lord. The bond with Christ establishes a bond between brothers and sisters that also converges and is expressed in the communion of material goods. Being members of the Body of Christ makes believers responsible for one another," the pope explained.

However, the pope also recalled the example of Ananias and his wife Sapphira, two members of the early Christian church who suddenly died after it was revealed they withheld a part of the profit from the sale of their land from the apostles and the Christian community.

Pope Francis explained that the doomed couple "lied to God because of an isolated conscience, a hypocritical conscience" that was based on a "partial and opportunistic belonging" to the church.

"Hypocrisy is the worst enemy of this Christian community, of this Christian love: that way of pretending to love one another but only seeking one's own interest," he said. "In fact, to fail in the sincerity of sharing or to fail in the sincerity of love means to cultivate hypocrisy, to distance oneself from the truth, to become selfish, to extinguish the fire of communion and to destine oneself to the chill of inner death."

Before concluding his talk, the pope prayed that God would "pour out his spirit of tenderness and circulate that truth which nourishes Christian solidarity".

The sharing of goods, said Pope Francis, is "far from being an activity of social assistance" but rather "the indispensable expression of the nature of the church, the tender mother of all", especially the poorest.

yes true they are tourists in church,they don't know what to do? have mercy on them