‘I have a dream’: Martin Luther King, the man and the speech

‘I have a dream’: Martin Luther King, the man and the speech 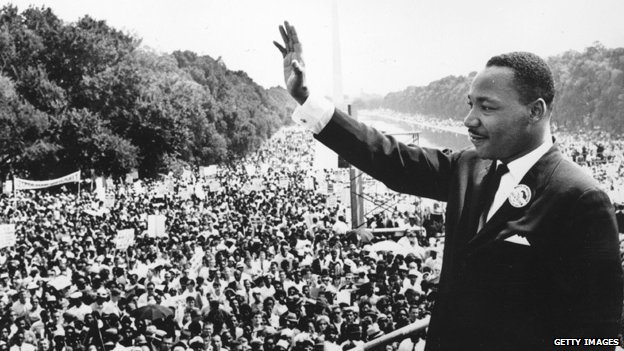 More history from the BBC

On 28 August 1963, when Martin Luther King proclaimed "I have a dream" to a crowd of 250,000 people, he captured the spirit of the Civil Rights Movement and with millions watching on TV, reached out to a nation in a way that has great resonance 50 years later.

The March on Washington was a mass demonstration organised by an umbrella of civil rights groups who used it as a rallying cry for equal rights.

In 1963, black Americans faced racism across America but particularly in southern states where laws forcibly segregated them from white Americans. And those who dared to stand up for racial equality could face racist attacks from Ku Klux Klansmen, who bombed homes and churches.

The march marked the peak of a series of protests against racial injustice that had begun when seamstress Rosa Parks refused to give up her bus seat for a white passenger in 1955. Her action sparked a bus boycott campaign across Montgomery, Alabama.

Dr King was asked to lead the campaign because he was new in town, but his talent for rhetoric and his clear vision quickly brought him to national attention. He became a dominant force in the movement and so was called on to make the final speech at the march.

Why was the speech so memorable?

Although King's famous speech was 17 minutes long, it is best remembered for the final few minutes when he pushed aside his papers and in a soaring voice painted an inspirational picture of a future America.

He told the crowd: "I have a dream that my four children will one day live in a nation where they will not be judged by the colour of their skin but by the content of their character."

He declared that America could only became a great nation if freedom applied to "all of God's children."

The power of the speech was arguably down to the delivery as much as the content. Dr King's speech writer Clarence B Jones confirmed in his book Behind the Dream the final section of the speech was off-script, after King gave himself over "to the spirit of the moment." 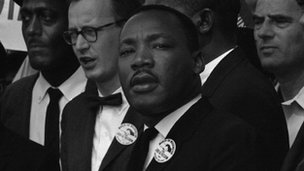 "From his body language and the tone in his voice, I knew Martin was about to transform into the superb Baptist preacher he was," Mr Jones wrote.

Brian Ward, Professor of American Studies at Northumbria University, says: "People were captivated by this final section. The rhetoric was so moving and visionary."

Dr King borrowed ideas and turns of phrases from a rich array of sources, including other orators. The conclusion of his speech where he wanted to 'Let freedom ring' across America was adopted from an address made by the Chicago preacher Archibald Carey in 1952.

However, Dr Clayborne Carson, history professor at Stanford University and director of the Martin Luther King Jr. Research and Education Institute, argues this was a strength not a weakness.

Writing in the journal American Heritage, he said: "The genius of King's 'I Have a Dream' speech lay not in his originality but in the way he expressed ideas better than those from whom he borrowed. In turn his words have informed the oratory of subsequent generations of American political leaders."

The speech reminds us how Dr King made the Civil Rights movement appeal to a broader section of society. Zoe Colley, a lecturer on civil rights history at Dundee University, said: "He sat across white liberals, poor black southerners, and the international community. That was his most important role." 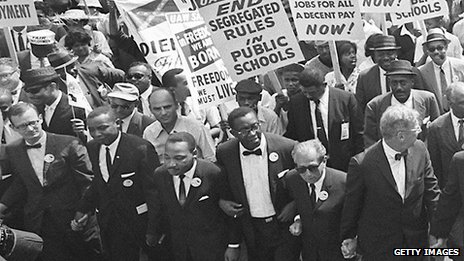 Dr King (third from bottom left) leads the March on Washington. It was for jobs and freedom

This is demonstrated in his speech in which he declared his dream was "deeply rooted in the American dream", and told black Americans: 'We cannot walk alone'.

"He was portraying himself as a quintessentially American leader pursuing American goals, and this appealed to northern liberals," Professor Ward says.

"Civil Rights were now seen to be in keeping with the ideals of middle America."

Dr King also strongly backed peaceful protest, warning in his speech: "We must not allow our creative protest to degenerate into physical violence."

Civil rights historian Professor John A Kirk, of the University of Little Rock in Arkansas, said Dr King's positions had much to do with his background: "King came from a deeply Christian and middle-class background, and this was reflected in his non-violent approach." 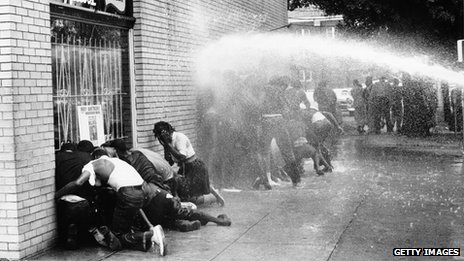 Student protestors are hit by water jets in Birmingham, Alabama in 1963. Images like these raised support for the civil rights movement

The March on Washington proved that it was possible to hold a mass peaceful protest. Just months earlier another peaceful march in Birmingham, Alabama, had been broken up when firehoses and dogs were turned on the protesters.

In the wake of the march and his speech, Martin Luther King's role in promoting harmony was recognised internationally when he was awarded the Nobel Peace Prize in 1964.

However, Ms Colley warns against taking him to "represent the whole civil rights issue."

"He was really more of a figurehead," she says. "We shouldn't forget beneath him there were thousands of people in the Civil Rights movement plugging away in a patchwork of communities across towns and cities."

According to Prof Ward: "Most people now look back at the last two minutes of his famous speech, because it's easy to remember him asking us to all get along. But that means we don't pay attention to King as the social critic."

The March on Washington was a call for jobs as well as freedom and the first half of King's speech, which was steeped in economic terminology, reflected this. Dr King told the crowd that America had given its black citizens a 'bad cheque' but that "we refuse to believe there are insufficient funds in the great vaults of opportunity of this nation."

He added that black Americans lived "on a lonely island of poverty in the midst of a vast ocean of material prosperity", an issue that would become increasingly important to Dr King in later years.

"There is a danger that we just remember him as calling for biracial brotherhood", says Prof Ward. "We forget that later on he becomes interested in the pragmatics of how equality would be achieved and looked at the redistribution of wealth."

Dr King's final campaign before his assassination in 1968 was the Poor People's Campaign, which was looking at the effects of poverty on whites and Hispanics as well as blacks.

The civil rights leader also strongly opposed the Vietnam War. On 4 April 1967, he made a strident speech that linked the plight of people in Vietnam to civil rights and called for a unilateral ceasefire. 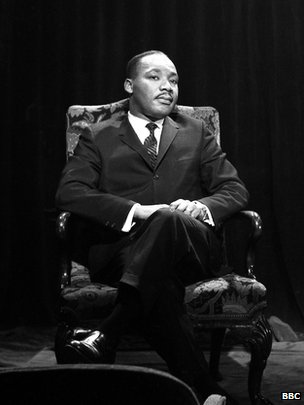 Dr Carson says: "During the last year of his life, King himself spoke of his dream turning into a nightmare. In his 1967 anti-war speech at New York's Riverside Church, he labelled the American government as 'the greatest purveyor of violence in the world today.'"

The FBI, which had bugged Dr King's home and office shortly after the March on Washington, stepped up their operations following his anti-war speech, fearing he had "been influenced by Communist advisers."

Dr King's call for a redistribution of wealth and opposition to the Vietnam War was forgotten following his assassination, as his message of peace took precedence in the troubled decades that followed.

"White conservatives who had been condemnatory of him as a trouble maker and someone stirring up social unrest, suddenly realised in retrospect he was a voice of reason", says Prof Ward.

Despite this Dr Carson, who has directed the Martin Luther King Paper's Project since 1985, has come to believe the Dream speech should hold a special place in history.

He says: "I began to see the speech not as an isolated instance of skilled oratory, but rather as a remarkably cogent contribution to a continuing dialogue about America's destiny."