Is India losing its battle against Covid-19?

The helplessness seen across India shows administrations have made no real preparation despite warnings from experts. 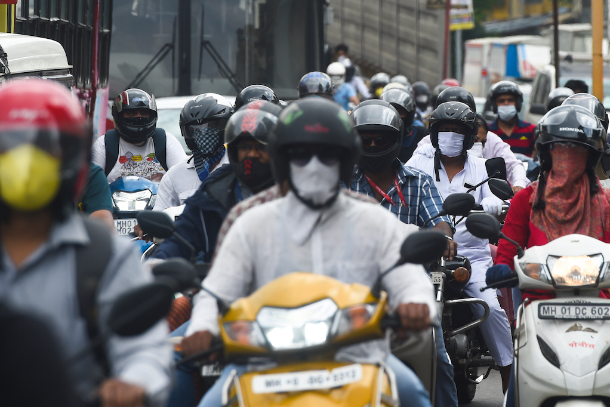 Commuters in a traffic jam during rush hour in Mumbai on June 8 as India's places of religious worship, hotels, restaurants and shopping malls were allowed to operate again after more than two months of lockdown. (Photo: Punit Paranjpe/AFP)

India's bravado in dealing with Covid-19 seems to be heading towards near-collapse, with nearly 10,000 new cases added daily amid reports of a shortage of hospital beds and the breakdown of the economy.

With some 287,000 cases and more than 8,100 deaths as of June 11, India has become the world's fifth most infected country after the United States, Brazil, Russia and the United Kingdom.

"There are a lot of difficulties and crises. Our villages, poor, laborers, farmers and industries are facing a crisis," federal road transport minister Nitin Gadkari said on June 10.

"The crisis faced by the government of India has also grown. Some of our state governments don't have money to pay salaries next month."

The crisis was well predicted by economists and health experts months in advance given India's 1.3 billion population and the cramped and unhygienic situations facing most people in cities.

The government of Prime Minister Narendra Modi imposed a nationwide lockdown from midnight on March 24 when positive cases were less than 100. More than 70 days later, the economic and social situation compelled him to ease lockdown rules as cases were spiraling up.

The government faced a Catch-22 situation, say political observers like Vidyarthi Kumar. The economic situation looked grim if the lockdown continued but relaxation could mean a pandemic explosion.

Besides the double whammy of the severe financial crisis and shooting up of the Covid-19 graph, health workers report a shortage of health infrastructure in cities, including commercial hub Mumbai and national capital New Delhi.

The national capital region of Delhi, with 19 million people, is a state. Arvind Kejriwal, its chief minister, last week said the administration was short of hospital beds as the city reported some 31,000 cases. The government estimated Delhi alone would have some 550,000 cases by July 31.

Delhi has several large hospitals functioning under the federal government besides those under state and private management. But altogether fewer than 27 percent beds are used, Maken said.

A lack of coordination and effective command structure seems to be the issue, NHRC officials told media. The agency on June 10 served a notice to the Delhi government and the federal government asking them to file comprehensive reports on the availability of hospital beds within 10 days.

Lack of money seems another issue.

Doctors at New Delhi's Kasturba Hospital have threatened mass resignation over non-payment of their salaries since March. "As this is not the right time to go on a strike, we have not stopped giving our services," said Sunil Kumar, president of the doctors' association in the hospital.

Doctors in another government-run hospital have also threatened mass resignation on similar grounds.

Crowded Mumbai city of 18 million people, where an estimated 40 percent live in cramped slums, had reported 52,000 positive Covid-19 cases as of June 11. As the city adds some 18,000 cases daily, its death toll has doubled in a fortnight to more than 600.

Maharashtra state's chief minister Uddhav Thackeray says the lockdown could be reimposed in capital Mumbai and other severely affected areas.

Officials say more than 65 percent of positive coronavirus cases come from cities like Mumbai, Delhi, Chennai and Ahmedabad. A shortage of beds remains a significant handicap in Mumbai and Chennai.

The virus has now spread all across Asia, and experts say the peak will come only in July and August.

But many observers say that, more than beds, the real challenge is a lack of a centralized management structure to fight the crisis. The country is also facing an acute shortage of healthcare staff, testing kits and basic infrastructure in hospitals.

Has India's courageous and much hyped battle against Covid-19 already been lost?

Meanwhile, authorities seem to be drawing satisfaction from the fact that Covid-19 mortality rates have been around 3 percent, while recovery rates are near 48 percent.

Many say the lockdown enforcement from March 25 had little impact in checking the spread of the virus.

"The lockdown did not stop or fight Covid-19. It rather brought immense hardships for millions, especially migrant and daily wagers, and hit the economy hard. When the lockdown was relaxed, we have an abnormal increase in the number of positive cases ... Something went wrong somewhere," says Ahmedabad-based Congress leader Ilyas Qureshi.

In many places, the refrain is to develop the "art of living with corona." It shows the hollowness of the claim that India fought the battle led by PM Modi and was victorious.

But the administration made no real preparation for the impending pandemic. That is the reality on the ground now facing all Indians.

Thursday in the 5th Week of Easter
John 15:9-11 "Remain in my love, that your joy might be complete."