Isolated but not alone 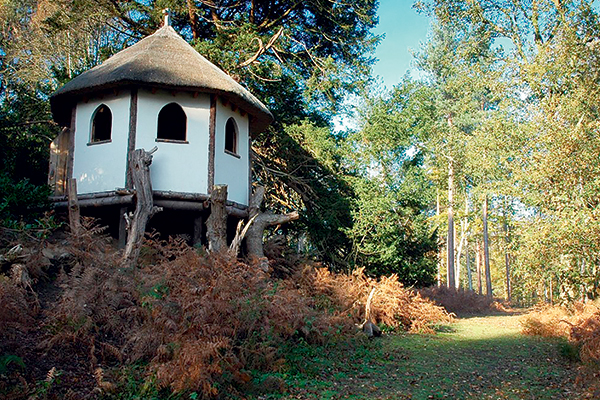 The Hermitage at Painshill, Cobham, in Surrey

In AD 305 (or then abouts), St Anthony emerged from 20 years of “self-isolation” inside a ruined fortress in Egypt. He had had his food thrown over the wall by friends and had spoken to no one – except the Devil at whom he was heard shouting. Athanasius reports that the substantial crowd, who had gathered to observe his emergence, were very surprised to see that he was both healthy and sane. This is most encouraging!

I was 70 last month, so I am now self-isolating, but in fact because of my personal lifestyle the major difference it will make to me is that I will save money on petrol: some other poor soul will have to bring any shopping I need up my hill for me and Mass, 25 miles away, has been cancelled. (I am sure you will all be relieved to hear that St Mary the Harlot in the fourth century was canonised despite never going to Mass and receiving Communion only once in her life.)

But I know I have some solid actual advantages over many people who may well be feeling lonely and frightened; not just frightened of Covid-19 but of isolation itself and the consequent loneliness and silence. Already the web is full of articles telling us how to look after our “mental health”, since apparently being isolated will more or less automatically drive us bonkers. I have never spent 12 whole weeks – or however long it is going to be – in total solitude, but I have spent periods of over half that long alone and silent and I do not think I am any more bonkers than I was before. Of course I chose it, which may make a difference, but … at least I can offer you some dos and don’ts, so that, like Anthony, we can all emerge sane and healthy.

The first thing I would suggest is very simple: change the vocabulary. We are not going to experience isolation but solitude. I am somewhat amazed that no English-
speaking political leader seems to have taken this one up. “Social isolation”, even “social distancing”, sounds rather bleak; talk of “supported solitude” sounds very different. Isolation feels connected to loneliness and to compulsion; solitude to spiritual growth and creativity. Jesus may have been solitary through his fast in the wilderness, but we do not think of him as “isolated”. When at the end of a long hard day we lock the bathroom door against even those we love and sink into a hot bath, we enjoy our moment of peace and solitude, rather than feel isolated or lonely. In fact, we know that a certain amount of solitude is good for our mental health – and because of its connection to “solo”, solitude has an ambience of courage and adventure.

Actually, the idea that most of us are going to be “isolated” is simply untrue. We wake alone in the night and reach out for the light switch – and we are not isolated, we are instantly connected to a whole lot of people who are generating power to enable our solitude. When we turn the tap on, wait for the post, even put on a warmer jersey, we may be alone but we are not isolated; we are part of a huge complex social web. Most of us have telephones – 85 per cent of UK households have a landline – and many of those who do not use a mobile. Many are also connected to the internet and services such as Skype. We are not isolated as people used to be.

And that is before we even begin on prayer. Solitude is very good for prayer. This presumably is why Jesus was driven by the Spirit into the wilderness to be tempted. We all know that solitude, and its accompanying silence, is good for prayer. How many of us begin each Lent planning to build in some solitude, to go on retreat or take a day out of our “normal” routines, and realise, come Holy Week, that for yet another year we have failed again! This Lent we are being given retreat time, for free. We can even feel rather noble and “caring for others” about it – both for medical staff and for those more vulnerable than we are – while in fact occupying some space we have failed to use before despite our good intentions and our knowledge that it works. Nonetheless there are some special “temptations” awaiting the solitary. The Devil tried to undermine Anthony by afflicting him specifically with boredom and laziness. And also, famously with sexual desire (rather tastefully described in my book of saints as “phantoms of women”. Ho-hum). I shall leave the last of these to you and address the other two.

Boredom and laziness are both the great sins of the desert hermits and also, interestingly, of the internet age. It is phenomenally easy to waste hours and hours of a silent day playing, for example, online patience or similar games. What is interesting is the curiously “addictive” quality of this – it often barely provides pleasure, just uses time in a fatuous, dissatisfying sort of way. John Cassian, a desert hermit for a while before going on to Gaul, wrote a book about his experience which was extremely influential for Benedict when devising his monastic rule. Cassian outlined a particular problem for solitaries, which he called accidie. This is too often interpreted as “depression”, but it is clear that Cassian saw it as different – as a sort of fidgety care-lessness that uses time and gives no corresponding satisfaction.
It is something to watch out for. I have noticed in myself at the moment a tendency to use looking at the news in a similar way. Yes, looking at the news is useful – and will eventually let us know when we can emerge from our solitude. But looking at it repeatedly, endlessly – and especially at details of the pandemic – is not helpful; it increases anxiety and too often raises a particularly mood-lowering irritation and lack of charity towards others. (Looking at pictures of people buying too much loo roll or failing to observe “social distance” simply makes me cross without in any way affecting their behaviour.)

There are better things to do with all the extra time we have. I’d strongly suggest doing something a little difficult (not too difficult). Reading something slightly more demanding than you usually tackle is a good strategy. Those big Victorian or even earlier novels work well. Two suggestions here might be Daniel Defoe’s Journal of the Plague Year and, particularly if you remember the children’s version, his Robinson Crusoe: both are about not dissimilar experiences to those we are going through – infectious disease and compulsory solitude. They are thoughtful, philosophical and religious. (And Amazon is still delivering.) But there is a huge choice of the books we meant to read and did not get around to – War and Peace, Middlemarch and Tale of Two Cities for example. Moreover, serious novels written before 1900 tend to take faith seriously and “normally”.

Another approach is handcrafts. For most women over 70, there are skills – knitting, embroidery, tapestry – which we learned as children and too often let go of. They are rhythmical, encourage healthy reverie and are creative. And you can refresh your knowledge online if you need to. (There are presumably similar craft skills for men, too, but I do not know what they are.) If nothing else, I hope to complete a patchwork quilt that I started and did not finish years ago.

I think too that we are lucky (or graced) with the time of year. Having endured one of the wettest, most miserable couple of months in living memory we are turning, at last, towards spring. I am privileged here because “social distancing” is a great deal easier where there are a great deal fewer people. And walking today I saw my first pair of oyster catchers and my first puddle of frog spawn. They are promises of the future. There are greening buds on the larch trees, wind flowers – anemone nemorosa – beside the lane and any day now the hill lambing will begin. If you really cannot get out safely, telephone a child and ask them to leave something coming green on your doorstep, put it in a vase and watch it daily. Fresh air and new growth are both physically and mentally good for you, and are lovely and hopeful.

The point is that we did not choose any of this – and it would certainly be better if it was not happening. But it is. I believe that solitude and silence are beautiful, are good for us, do not instantly make us mad and do offer rich opportunities. Give it a go – look for the joy and the laughter, because it will be there.

Sara Maitland is a novelist and writer. She is the author of A Book of Silence and How To Be Alone.

To find a church live-streaming Holy Mass, see Isolated but not Alone, The Tablet's compilation of online resources for Catholics during the Covid-19 pandemic.