Justin Welby on the power of renewal

The Community of St Anselm 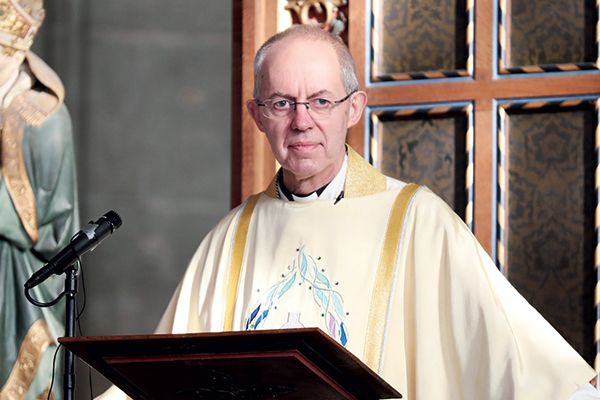 The Archbishop of Canterbury, Justin Welby, who founded the Community of St Anselm in 2015, says that its presence at Lambeth Palace is a daily reminder that prayer and service are at the heart of the life of the Church

Anthony Gardner: What inspired you to start the community?

Justin Welby: In 2013, I made the renewal of prayer and the religious life across the Church one of my personal priorities. This was never to say that I thought I, personally, was best placed to bring that renewal – it is God’s work, in collaboration with those called to live in community. But I wanted to make it clear that the religious life matters profoundly to the Church: it has always been the place where renewal begins.

Starting a community here was about ensuring that Lambeth Palace, which has its own rich tradition of housing religious communities, was committed to collaborating with the renewal that God so clearly longs for. When praying communities are supported and flourishing, their gift to the Church is beyond measure. In them, the broader Church finds inspiration and challenge, and is held in wise and loving prayer.

A.G. Why did you choose to name it after St Anselm?

J.W. We wanted to give the community a name which connected it to the history of the religious life, Lambeth Palace and the Archbishop of Canterbury. I’m a historian by training and have an interest in those who came before me; they adorn the walls and look down upon me here.

St Anselm of Canterbury jumped out as representing something helpful for the project we were embarking upon. He was a Benedictine monk, abbot, archbishop and a great theologian. He wasn’t afraid to stand against authority and speak truth to power while remaining ever faithful in service.

This combination of experiences, added to the fact he became a monk at a young age (having been first turned away), seemed to speak powerfully to all that I hoped the community might accomplish, in particular the three core dimensions of our community life: prayer, study and service.

A.G. In your sermon at the 2015 commissioning service, you spoke of “all at Lambeth Palace for whom this is a radical change, including me”. In what way has it been a radical change?

J.W. Prior to the arrival of the first cohort of 16 young people in September 2015, and just a year before that five members of Chemin Neuf, the praying presence at Lambeth Palace had been maintained for generations by the faithful of various Anglican religious communities.
The energy and intentionality that the communities of Chemin Neuf and St Anselm (CoSA) bring to the life of the palace has transformed us. I often reflect on the comments of a colleague who has been visiting the palace for 20 years and now lives here. He once said it had gone from “being an office with an archbishop’s flat above it to being a centre of prayer with an office at one end”. The presence of these communities within our wider community of communities ensures prayer is at the heart of all we do. This is radical.

A.G. What have you been most pleased to see come out of the community?

J.W. During the pandemic, I have been volunteering at Guy’s and St Thomas’ Hospital, my local (it’s at the bottom of the garden). Maybe less well known is that CoSA members have been serving as chaplains there since 2015 in a long-running partnership.

Of course, I love that the members pray and learn during their year how to deepen their prayer life. Equally I am passionate about the need to read, study and understand our faith, and our world. But what I am most passionate about is how prayer and study turn outward into our service in the world: our service to the most vulnerable, the most in need.

A.G. Do you think that monastic ideals are harder to realise in the twenty-first century than in previous ages?
J.W. We need to take seriously the issue of commitment-phobia in our culture. With endless options and opportunities for pleasure, distraction and personal advancement, fewer and fewer of us are willing to commit ourselves to something. Coupled with that, we have seen, in the West, more generally a trend towards people being more isolated, and communities being more isolated, and communities more atomised. The pandemic has seemingly supercharged this tendency.

Religious community offers an ancient and powerful answer to that. A call to serve in one place for your whole life is the antithesis of what most now know. In fact, strangely, it seems to me that those who have coped best during this period are those who have managed to embrace the simplification of life necessary at this time. Of course, I’m not trying to sound privileged in this observation. I fully recognise that for many they have no choices at this time. Loss of work, school, outside space, loved ones is unbearable and no choice at all.

But so often it is the obstacles we face in our life that we can’t sidestep or jump over that force us to reflect more deeply, to change. The monastic ideal, to draw away from the world and closer to God that God may be more manifest in the world, is counter-cultural in the extreme. I would suggest, however, that it is ever more necessary.

A.G. How do you see the role of the community within the Church as a whole?

J.W. The religious life in history seems to me to find its normative place at the margins. I don’t think this community is any different. The call is for the few, not all. But the impact of the choices of the few can and does have the capacity to transform the whole Church and the world. It would not be the first time that a community of believers gathering together has done so.

One role for CoSA, in a small but significant way, is the ecumenical nature of the vision. This is where Chemin Neuf has been so instrumental. Its call to seek the unity of the Church inspires me as I see its members live it each day here at Lambeth (the Roman Catholic members attend the Eucharist but are unable to partake of the elements; from time to time we reverse this by inviting a Roman Catholic priest to celebrate Mass here so that Roman Catholic members of staff and members of CoSA or Chemin Neuf can receive the sacrament, and for others of us we are reminded of the pain of division). CoSA is indebted to its example and we see in the diversity of its community life (nearly 40 countries and all major denominations represented over six years) the fruit of this ideal.

Of course, ultimately the work of unity is God’s work. For now, the role is simple. To be faithful to those whom God calls each year, sharing what we have that they may go away so rooted in Christ, they will never let go.