Lead us, kindly light, into community and communion 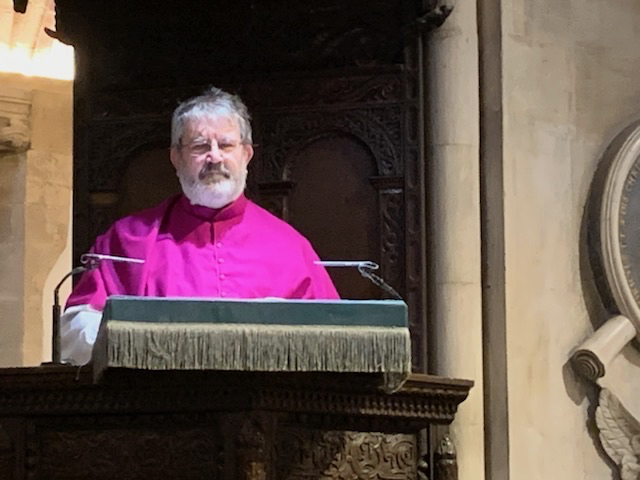 Canon Robin Gibbons preached at the special Newman Matins held at Christ Church, Oxford on the day of the canonisation of St John Henry Newman in Rome. In many ways this was an historic moment, a recognition by the Anglican community of their receptivity and love of one who did so much for Anglicanism but also who is bringing the two churches closer together. Canon Gibbons is one of Christ Church's Ecumenical Canons and the first Catholic priest ( Henry Mayr Harting being the first Catholic lay Canon as Regius Professor of Ecclesiastical History form 1997-2003). Even though he transferred form the Latin to Eastern Rite, he remains Catholic. "It was in many ways a very historical and moving moment for us in Christ Church and from it comes a desire to know Newman and to forge closer ecumenical bonds, and to somehow commemorate him in the place he began his ordained ministry," he told The Tablet. "I am sure that in years to come, many will make pilgrimage to Oxford on a Newman journey, the close ecumenical ties we now begin to have in the Cathedral are partly a sign of his inspiration."

The full homily is reproduced below.

It is certainly an odd but not unpleasant feeling to be preaching on a person, who at the beginning of this service was a Blessed, but now has just been proclaimed a Saint by Pope Francis at a Mass taking place in Rome, with our Bishop and many Anglican clergy and people present, while at the same time we in Oxford commemorate John Henry Newman.

In 1833, traveling in the Mediterranean, the young John Henry Newman fell seriously ill, and it was thought he might die. His servant asked him for his last directions, which he gave, but added: ‘I shall not die, for I have not sinned against light’.[1] During his recovery, in a highly emotional state, he wrote ‘The Pillar of the Cloud’, a poem which became the hymn Lead kindly Light (written in 1845). Disliked by Newman, it is typical of its time, maudlin in that Victorian sentimental way, so much so that the arbiter of such taste, Queen Victoria asked for it to be read to her on her deathbed! Yet that theme of light is crucial for understanding a side of Newman that draws us all into community and communion with him.

Later on, when challenged about the puzzling nature of the ‘kindly light’ and the identity of the ‘angel faces’ in the last line of the hymn, Newman replied crisply; 'I am not bound to remember my own meaning’! Words that are music to my own ear![2]

Despite playing down his own insights, John Henry Newman knew exactly what these things meant, the ‘Kindly Light’ was Christ, his guiding star throughout his long life, much as an older English saint, Bede, understood in his brilliant evocation of Christ as our navigating light:

"Christ is the morning star who when the night of this world is past brings to his saints the promise of the light of life and opens everlasting day."

There is a ‘sameness’ in their understanding of Christ, not only as the light of transformation and transfiguration, but as the ‘true light’ that draws us onwards, helps us progress in life through change. Isn’t this also the real meaning of the epitaph carved on his gravestone in Rednall; “ex umbris et imaginibus in veritatem,” (out of shadows and phantasms into the truth), another Latin phrase, his Cardinals motto, Cor ad Cor loquitur ( heart speaks to heart),  hints not only of the journey into understanding, that heart of study, reflection, and knowledge, but also takes us into the heart of God through his other great gift, friendship, those ‘angel faces’, our loved ones and friends, who are brought with us into complete and perfect light!

Apart from the corpus of his writings and thought my hope is that John Henry will also be seen as a teacher of the journey to God, a seeker whose example may help us, and a more balanced voice showing how faith and reason co-exist. More than that, he is an ecumenical saint, loved by Catholics and Orthodox, he ought to be known more by the Church of his baptism and formation, the one in which he was confirmed, ordained and first ministered in pastoral work and teaching, and who still retains so much of his Anglican legacy; let us pray he becomes for us all a truly ecumenical Doctor of the Church!

Newman is a complex character, a person for all seasons, many claim him for one reason or another, academics can claim him through his writings and letters, through Oxford and University College Dublin. Liberals because of his high doctrine of conscience, traditionalists because of his fidelity to the Church, but perhaps in these days of shifting Church, it is his particular insight into the vocation of the lay person, that sensus fidelium, which may help us most: “I want a laity, not arrogant, not rash in speech, not disputatious, but men (sic) who know their religion, who enter into it, who know just where they stand, who know what they hold and what they do not, who know their creed so well that they can give an account of it, who know so much of history that they can defend it”[3]. Prophetic words for all of us!

Newman is no white clean saint, aware of his own faults, he describes saints often as "whitey brown", in personality he could be charming, difficult, clear, obscure, angry and gentle, and he had a sense of humour but also a sharp tongue. "I have no tendency to be a saint,” he told one admirer. “Saints are not literary men…. I may be well enough in my own way, but it is not the ‘high line”. Near the end of his life, his sister Jemima and a little nephew visited him at Edgbaston, the child was cautioned not to tire the old man with questions, but Newman encouraged him to ask him one. He enquired, “What is greater, a Cardinal or a saint?” Smiling, Newman replied, “My child, a Car­dinal is of the earth and a saint is of heaven”[4]

To change is to become more perfect!

Newman gives us a sense of hope, that in an age of confusion we still have that strong compass of Christ to guide us, his oft repeated quote;  “To live is to change, and to change often is to become more perfect”, seems to encapsulate the challenge facing us, for it takes us to the heart of the call to conversion found in that word metanoia, when as Christians we are called to repent and believe in the Gospel, turn again and again, change and change often, Cor ad Cor loquitur,  open instead of rigid hearts, always ready to change direction towards the ‘Kindly Light’!

Newman was faithful to his own dictum, there is an interesting anecdote about a lady who came to Birmingham to talk with him in the eighteen fifties. She was Lady Lothian, a recent convert. Seeing him him first when he was saying Mass, she wondered how approachable he would be because he made her aware of the reality of an unseen world “it appeared to me very unearthly”. However she had no cause to be nervous. “He was most kind,” she wrote, “… so full of sympathy and Christian love that he is the last person one would need to be afraid of. That which struck me most was his childlike sympathy and humility, and next to that, the vivid clearness with which he gives an opinion.” True humility and there is a hint of another gift of his, as a saint of friendship.

Oxford played a significant part in the life of our new saint, Trinity, Oriel, St Clements, St Marys’ the University Church and Littlemore being the six main places. Here some of his greatest friendships were formed, the beginning of many, many ‘angel faces’ who changed the Church of England, and after his other conversion other ‘angel faces’ who inspired English Catholics, but Christ Church owns a part of him too, for it is here on 13th June 1824, that Mr. John Henry Newman, Fellow of Oriel, was ordained deacon in this Cathedral. On Trinity Sunday, 25th May 1825,he was ordained priest here by the Bishop of Oxford, Edward Legge, and so with these two ministries we can claim a strong link in the journey of Saint John Henry Newman! On this day of his canonization, I feel we ought to be proud that here, in this ancient place, his ministry and journey into ever progressive faith took wings. And in our age that the spirit of his age and time has changed into a far more embracing ecumenism, in no small part due to his influence.[5]

Each has a task and mission

When Cardinal Basil Hume was dying (1999) Queen Elizabeth II said of him, "He is MY Cardinal", well we can call Newman not only "OUR Cardinal", but also "OUR Saint and friend".

“I have my mission”, he wrote, “I am a link in a chain, a bond of connexion between persons. He has not created me for naught. I shall do good, I shall do his work; I shall be an angel of peace, a preacher of truth in my own place … if I do but keep his commandments and serve him in my calling”.[6]

Baptism begins our journey and it cannot be undone, a theology he understood so well, so Newman is forever a baptised Anglican, who through journey went from a rigid Calvinistic evangelicalism, to high church Anglicanism then to English Roman Catholicism, never a series of stops and starts but an ever opening progression towards the vision and friendship of God. [7]

When I studied him first I found him a bit too distant and it is only now that I see in Saint John Henry part of a call a vocation to a greater ecumenism, a saint of friendship beyond boundaries, to the point he fixes for us in the Dream of Gerontius, where the soul, beyond all Church and other divisions, glimpses God:

[1] When we took leave of Monsignore Wiseman, he had courteously expressed a wish that we might make a second visit to Rome; I said with great gravity, "We have a work to do in England." I went down at once to Sicily, and the presentiment grew stronger. I struck into the middle of the island, and fell ill of a fever at Leonforte. My servant thought that I was dying, and begged for my last directions. I gave them, as he wished; but I said, "I shall not die." I repeated, "I shall not die, for I have not sinned against light, I have not sinned against light." I never have been able to make out at all what I meant…We were becalmed a whole week in the Straits of Bonifacio. Then it was that I wrote the lines, “lead Kindly Light” which have since become well known.

J H Newman Apologia. Part 3, History of My Religious Opinions to the Year 1833 published as a Pamphlet may 5 1864

[5] He would write the day after his ordination as a deacon in 1824, ‘I have the responsibility of souls on me to the day of my death.’ Autobiographical Writings

[7] JHN was baptised on April 9th 1801 in the Church of St Benet Fink, Threadneedle Street, City of London. It was demolished in 1842.

St Thomas, Apostle
Jn 20:24-29 "Blessed are those who have not seen and have believed.”