Leandro, the Bike Guy who visited the Pope

And it really was. It was the Pope's private secretary, asking if I was still in Rome and if I would like to come to the Vatican this morning. I didn't need to check my agenda, and agreed to be there at 06:45.

Yes, I was going to meet the Pope! 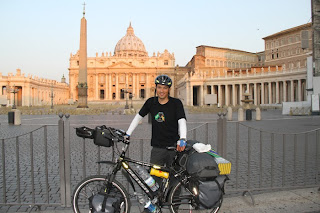 But is it as simple as that? You arrive in Rome and suddenly your phone rings and it is the Pope inviting you to visit him? No it's not like that. But when you are a bit crazy and have nothing to lose, you are going to go through channels that normal people wouldn't think about, or wouldn't believe to be possible.

My "Pope plan" started before the beginning of this trip. I knew that meeting the Pope is not a simple task, if you ask the one billion people who have the Pope as their leader if they want to meet him, you will never hear "No" as an answer. 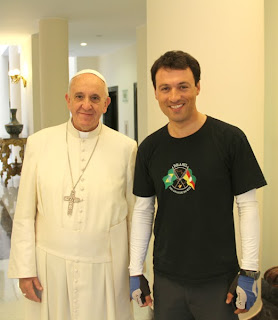 It was clear I couldn't arrive in Rome without a good plan. In Amsterdam, after some research I found someone who was very close to the Pope, and I knew if one letter of mine reached his hands there would be a good chance I could be successful.

I wrote him a letter first saying that I'm not catholic, but because of the media coverage of the Pope's election, I was aware of it and I was glad that the new Pope was not only a simple and kind man with a strong view to social issues, but also a neighbor of mine, since I'm from the Brazilian southern state of Rio Grande do Sul, which shares a border with Argentina.

I talked about my world bike tour and since this trip is about to getting to know new people, cultures and places, I would like to meet Mr. Francisco. I asked him not to contact the Vatican, because they receive this kind of request every day, but to tell the Pope that there was a "gaucho" (what people in my state are called) travelling the world by bike who would be "molto felice" to meet him, and to ask the Pope directly if he would agree. 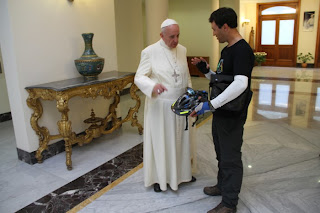 Then I sent him another letter when I arrived in Italy and others when I arrived in Rome. He told the Pope this morning that he had received 15 letters from me, which surprised me as I had not remembered writing so many.

Yesterday I spent the whole day with mixed feelings: excitement, thoughts, and disbelief that it really had been the Pope's secretary on the phone and not a prank call. So I shared the big news with only my family and a few close friends, in Holland, Brazil and Chile. 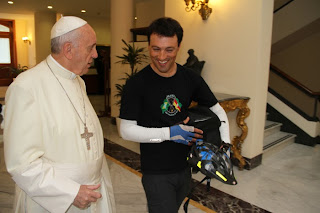 I went to bed very late and woke up at 04:00 o'clock this morning.  At 05:30 I was leaving the monastery where I'm staying and  after a stop to buy something to eat, I arrived at the Vatican at 06:15. I went straight to the gate where the secretary said they would Know to expect me. I knew it was too early but I had to find out if it was serious. When the Swiss guard asked my name and took from his pocket a piece of paper on which was written my full name, I was really relieved.

At 06:40 I was allowed to go in, but on the second gate I was stopped by the Vatican police who told me I was not able to get in with my bike, "here is the Vatican not Rome" then I told him about the call, and that the Swiss guard had my name. After some calls he allowed me to go in, to the surprise of the other guard who asked "by bike?" 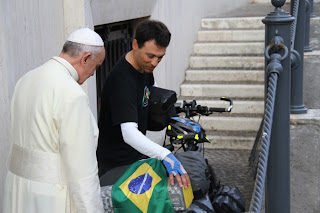 He gave me the directions to Santa Marta, the Pope's residence and I cycled there with everyone around very surprised at the unusual scene. When I got there I saw the police, the Swiss guard and a man dressed in a suit, who came to greet me speaking English and told me to "park" my bike close to the entrance.

We got inside and he became my "guide". We entered the small chapel, where he said the pope would celebrate mass in a few minutes, and explained the procedures of the mass to me. I think it was the first mass I've followed from the beginning to the end. 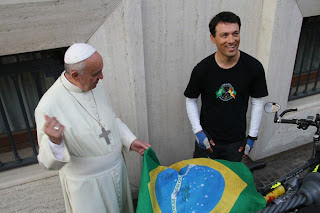 Everything was simple - there were about 15 people in the room, some nuns and men dressed with religious clothing, and my guide sat next to me. When the Pope entered I didn't realise it was him as he was with a green vestment and I asked myself, "why are people standing up?" Until it became clear who the man was.

He celebrated mass, and with the respect I have for all religions, I did what I was supposed to do: standing and sitting when I saw the people doing so. The mass lasted about 25 minutes and when it was over, the Pope left and everyone else started leaving as well. 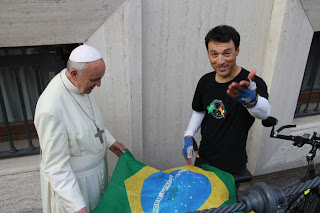 My guide and I stayed sat down and suddenly the Pope was back, now dressed only in white. He sat on the third row on the left side of the chapel and kept praying. I was sat on the right side, on the second row. Then I saw the person I wrote to coming to greet me. He said, "You made it" and "after some prayers, the Pope will come to greet you". My guide, who was next to me, opened a book and showed me my letter, he pointed to the part that said "I know it's going to sound ridiculous and you are going to laugh at me but... I really would like to meet him" we both laughed, what was once a impossible thing now was really happening. 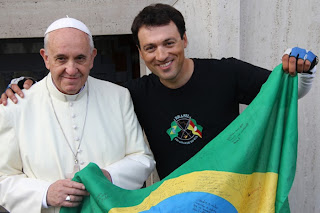 When the Pope was ready, he left the chapel and waited for me at the door. I left with my guide and the person I had written to, we laughed and I thanked him again.

The Pope knew I was not catholic, and I know that he's a very simple guy who doesn't care much about protocol and stuff. So I treated him in the same way I treat everyone I meet on this trip: with a smile, kindness, and affection.

I didn't kiss his ring, instead we shook hands and hugged.

We talked about a lot of things while we walked outside to where my bike was. We spoke in Spanish, and I gave him the greetings sent by the priest of Santiago of Chile, where I lived and have friends that I had called yesterday.

He knows Porto Alegre, my city, he said he has relatives in Pelotas, another city in my state. In fact when he lived in Buenos Aires he went to my state many times to visit his family. 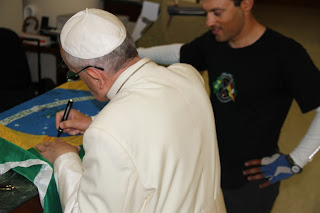 We spoke about the tragedy of Santa Maria, and I said that during all the years I have been living abroad that was the news I heard from Brazil that most got me down. Around 240 people died in that fire, only young people. He said that he couldn't go to Santa Maria, since it's too far from the places where he will be next week in Brazil, but he also found it to be a tragedy and he would remember that while in Brazil.

When we got outside, the Pope shook hands with the guys of the Swiss guard who were by the door and I did the same. I showed him my bike and spoke about my trip. I said, "this is my house, the bed, kitchen, and so on. He asked me questions and we both laughed when I said that you find crazy people everywhere including in Porto Alegre, the Pope said, "life is crazy!!" 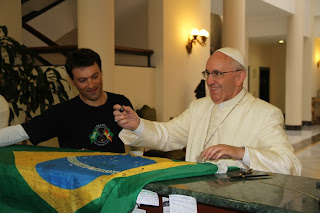 I gave him the drawing that a little Czech boy, nephew of a nun from the monastery where I'm staying, had sent him. And as I do with all the nice people I meet on my trip, we took a picture together and he signed my Brazilian flag, where he wrote

Then I shared some thoughts about religion, that I'm not going to write here, and the last thing we spoke was about the protest in Brazil. I said it is something really positive, when injustices start to suffocate the people, the best thing is to explode in that way, and then to be heard and noticed, it's like to cry, it cleanses you and makes you feel better. 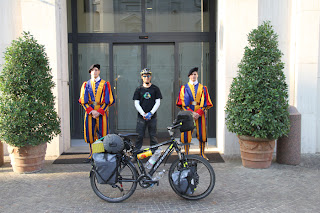 I know the Pope is very busy and I didn't want to be told by someone that it was time to go, so I thanked him for his kindness in inviting me in and asked the "friend" who I wrote the letter to, to also sign my flag because if it was not for him, I wouldn't have the opportunity for this experience.

We said good bye and from there I cycled to St. Peter's Square, where I am right now, writing this post and announcing to my friends and people who are going to read this, that life is simple like that, one day you can be camping in the forest without a shower and the next day you can be telling jokes to the Pope. 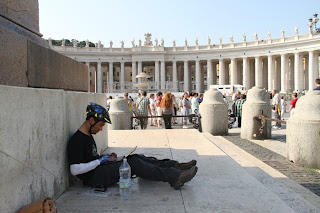 The secret is to not take anything seriously.
Life is crazy...