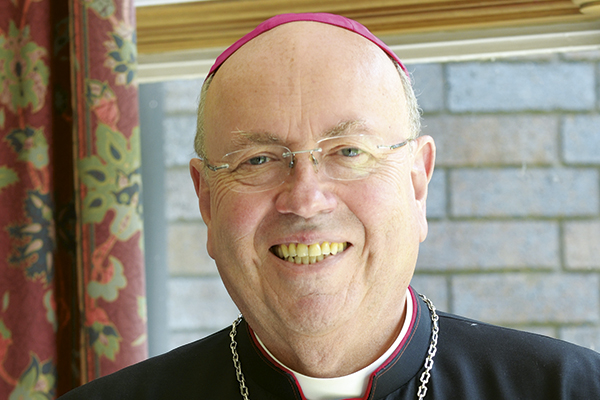 Liverpool’s genial London-born archbishop speaks frankly about the future of the Church and about his plans to revitalise his diocese through greater involvement of the laity.

A favourite church of Archbishop Malcolm McMahon’s is round, with the altar in the centre and huge panels of abstract stained glass on the walls. Built in the early 1960s, St Mary’s, in the industrial town of Leyland, Lancashire, has remarkable Stations of the Cross. Roman soldiers wear swastikas, women are in modern dress and a local workman helps Christ to carry his Cross. Even more unconventionally, there is a fifteenth Station showing the Resurrection.

This choice of church gives a significant clue to the theology of the ninth Archbishop of Liverpool. More clues follow in an interview in which the archbishop talks about his hopes and fears for next year’s diocesan synod. We meet in a small room at the diocesan offices located in a city suburb. Round the table also are two of the Synod 2020 moderators – both priests – and his communications officer.

Archbishop McMahon is genial and outgoing until we settle down to the interview. Then he folds his arms and becomes guarded. I get the impression that he finds journalists superficially friendly but bent on mischief. Frankness has occasionally, in the past, led to unwelcome headlines.

He says he was inspired to call the synod after reading a document on the subject published last year by the International Theological Commission. It described a synod as “a grace-filled event in which the People of God together with the Bishop meet to address the pastoral challenges of the time”. And Liverpool has more than its fair share of challenges.

Mass attendance has declined from more than a quarter of a million 50 years ago to 41,000 today. The fall is sharper than in other dioceses in England, attributable, in part, to people moving away from the North West and also because fewer Catholic immigrants have settled here than in other areas.

The previous archbishop, Patrick Kelly, closed a large number of churches. The city’s oldest church, St Peter’s, Seel Street, is now a restaurant and nightclub. Another listed church, St Mary of the Angels in Everton, is an orchestra’s rehearsal room. Archbishop McMahon says he will have to close more churches: “We still have far more than we need.” Of the 133 active diocesan priests, only 25 are aged under 50. If, as at present, only one priest is ordained each year, there will be only 50 active priests in 25 years. “We have 200 churches in 140 distinct parishes. It’s not going to work unless we try to find new ways,” says McMahon.

These “new ways”, begun under Archbishop Kelly and continuing apace, involve a huge expansion of lay ministry. In January five lay Pastoral Associates were appointed in a pilot scheme to explore whether paid professionals could take the lead in place of priests. McMahon, who spent some years working as a mechanical engineer before joining the Dominicans, is passionate about the role of the laity in the Church, saying: “The forgotten document of the Second Vatican Council is the one on the laity, which talks not just about laity becoming involved in the clerical functions but talks about laity sanctifying the world through their presence in the world, through being baptised in Christ. That’s the bit that’s lost.”

At a diocesan synod in Limerick in 2016, a proposal calling for leadership roles for women won the highest number of votes. A proposal to develop and support lay-led liturgies and celebrations of the sacraments was supported by more than 90 per cent of members. “I fully understand that the Church is run by women,” says McMahon in response to a question about women’s leadership. So what about ordaining women?

“We know from past practice that women are excellent ministers of the Gospel. There’s no question of that. We then have to ask ourselves what is it about priestly ministry that bars women? So we would need to look at priesthood much more anthropologically to see whether there is something deep within the notion of priesthood that reserves it to the male of the species. I think that’s work to be done.”

I point out that discussing women’s ordination is forbidden by order of St Pope John Paul II. “I’ll risk that,” he says. Then he clarifies that he will not talk about women’s ordination but will talk about the role of women in the Church. Liverpool has more than 100 permanent deacons, far more than any other diocese in England and Wales. Should there be women deacons?
“Pope Francis is looking into that.”

Would he like to see women deacons?
“I would not like to see any more people become clerics. We have enough clerics.”

Synod 2020 has 500 members, more than 300 of them lay men and women. They are being told to adopt Pope Francis’ injunction for priests, Religious and laity to collaborate and to listen with open hearts. There is a short online questionnaire inviting local Catholics to give their views about the Church. Their responses and local consultations will form the basis of proposals that will be voted on at the synod.

The archbishop has the task of translating successful proposals into action. He admits he risks raising expectations he cannot fulfil if proposals are passed on universal issues such as women’s ordination or ending mandatory celibacy for priests, since he cannot do anything outside the parameters of church teaching. But then he adds: “Pope Francis has changed the whole attitude of the Church into becoming a listening Church, so I would have no fear in bringing these universal issues to Rome, not because I necessarily agree with them, or don’t agree with them, but because these are what the people want to say and they have to be heard.”

He considers an even bigger risk will be seeking the guidance of the Holy Spirit. “We are cashing in our faith in a very strong way when we listen to the Holy Spirit,” he says.

Again, on raising expectations, I remind him that the bishops of England and Wales have so far failed to produce pastoral guidelines to allow Communion for divorced and remarried Catholics in certain circumstances, following Pope Francis’ 2016 apostolic exhortation, Amoris Laetitia. It may yet happen, McMahon explains. I ask if he would like to see guidelines.

“It is something we have discussed extensively and I think that discussion is not complete and, for the time being, it would remain confidential.” In his own archdiocese, he says, even before Amoris Laetitia, priests responded “as sympathetically, kindly and as generously as possible”.

We move on to the subject of clerical sexual abuse and cover-ups, which he has said has diminished the Church’s authority. He has no hesitation in saying how this can be won back. “There is only one thing the Church can do and it is to do what Christ told us to do and that is to go out to the poor,” he says.

Archbishop McMahon speaks about the necessity of food banks for the working poor, where money runs out at the end of the week, and of the squeeze on Nugent Care, which provides Catholic social services in the diocese. A home for the elderly and a special secondary school have closed. Other institutions are in danger. But after setting out the difficulties facing the diocese, Archbishop McMahon is keen to stress that it is not all gloom. “We’re in a healthy state,” he says. “When I go round parishes – as I do frequently – there’s a buzz. We have one of the best pastoral formation programmes of any diocese and a lively justice and peace commission. Things are good.”

He particularly values the work being done in the diocese’s 230 schools to teach young people about the faith. Liverpool has a Catholic Duke of Edinburgh-style awards programme, Faith in Action, with 1,100 participants aged between 12 and 16. “It’s an excellent way to widen the idea of Church,” he says. “Sometimes the only expression of faith in their lives is at school. Young people are very spiritual. They’re not all cynical.”

A new Confirmation programme is being rolled out next year with music festivals and other gatherings. Candidates will be invited to enrol for Confirmation online. The sacrament will be conferred in the diocese’s 18 pastoral areas (roughly the size of deaneries) to give a sense of belonging to a bigger Church.

Archbishop McMahon was born in London and still sounds like a Londoner. He was Bishop of Nottingham for 14 years before moving to Liverpool five years ago. He celebrates his seventieth birthday in June. I ask him what he does to relax. “I don’t relax. I don’t do anything except my job.”

One of the synod moderators, Fr Philip Inch, interjects: “He talks about not having a day off, but it’s because he is alongside us and that, I think, is a huge contribution that he makes to this diocese: being the Church we are called to be at this time, and in this place.” Fr Inch has spoken with such warmth that the mood lightens. The archbishop is friendly again and laughs when I point out that he had his arms folded throughout our discussion.
He really does not like interviews.

Elena Curti is a former deputy editor of The Tablet.