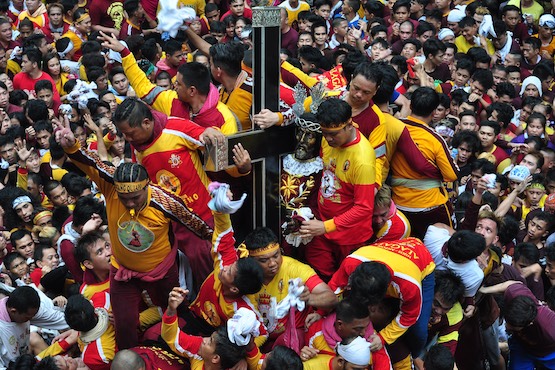 The image of the Black Nazarene is lost in a sea of devotees during the annual religious procession expected to attract close to 20 million people this year. The procession, which started at five o'clock in the morning, usually lasts up to 20 hours. (Photo by Angie de Silva)

Do not forget those who suffer from war and disasters.

This was Cardinal Luis Antonio Tagle’s message to a sea of Black Nazarene devotees during a pre-dawn Mass in Manila on Jan. 9.

The Archbishop of Manila told Catholics to remember those displaced by war in the southern Philippine city of Marawi and who suffered devastation from typhoons in the Mindanao and Visayas regions.

"Let us be one with them. Let us carry them and bring them along in Jesus' journey with us as he carries our crosses," the prelate told the sea of devotees clad in yellow and maroon shirts. Let us not lose heart because someone is journeying with us, Jesus who is with us in the traslacions[journeys] of our lives."

The Manila prelate made the call ahead of the annual re-enactment of the "traslacion," literally movement or passage in Spanish, of the image of the Black Nazarene from a park in Manila to a church in the city's Quiapo district.

Cloaked in a maroon robe, crowned with thorns and bearing a cross, the Nazarene statue was brought to Manila by Augustinian friars in 1607, decades after the start of Spanish colonial rule.

Millions of barefoot devotees clad in maroon and yellow shirts joined the annual religious procession through the streets of the Philippine capital.

They muscled their way through a frenzied crowd to get near the image of the charred Jesus figure.

The annual procession, which covers a seven-kilometer route, usually lasts up to 20 hours.

It commemorates the "solemn transfer" in 1787 of the Nazarene image from the San Nicolas de Tolentino chapel in the old city of Manila to Quiapo Church.

The image was supposedly carved by an anonymous Mexican sculptor and brought to Manila via a galleon from Acapulco.

Traditional accounts attribute the color to votive candles burning before the image, although the most widespread belief is that a fire on the galleon charred it.

In his homily hours ahead of the start of the procession, Cardinal Tagle referred to the victims of Marawi's five-month conflict that displaced about 400,000 people and typhoons that battered the southern and central parts of the country in recent months, killing hundreds.

"Let us not forget and let us not separate ourselves from our brothers who are suffering, the victims of storms, and our brothers in Marawi who are carrying their own crosses," said the prelate.

In May last year, Islamic State-inspired gunmen attacked the city of Marawi, burned buildings, and abducted up to 200 people, including a Catholic priest. The ensuing firefight killed more than 1,000 and leveled the city.

As the year 2017 came to a close, a series of strong typhoons devastated several provinces in the southern and central parts of the country, leaving thousands of people homeless, and farms destroyed. Devotees of the Black Nazarene raise their arms in supplication as the image of Jesus carrying the cross passes by in Manila during the Jan. 9 religious procession. (Photo by Angie de Silva)

The way to be human

Cardinal Tagle reminded devotees, estimated at close to 20 million this year, to look at Jesus who cares for the hungry, the thirsty, and the homeless, "to know how it is to be a real human."

"We can see in Jesus the way to being human because He carries the truth on how it is to be human," said the cardinal.

For those facing difficulties in their lives, he told them to hold on to their faith in Christ.

In his homily during the Mass that was attended by top government and police officials, Cardinal Tagle took the opportunity to remind those present not to depend on power.

"We were born without power. And in time of death, we will not have power. Let us live without greed for power and you will be a true human being," he said, adding that wealth does not make a person human.

Among those who attended the Mass before the procession was Archbishop Gabriele Caccia, papal nuncio to the Philippines.

Father Reginald Malicdem, rector of Manila’s Metropolitan Cathedral, said it was the first time that a Vatican representative had attended the celebration.

"It's a great honor for all us devotees that the representative of the pope is present on this special occasion," he said.

Father Malicdem said the nuncio himself wanted to attend the celebration. "He told me, if there are many people there, then I should go," said the priest.