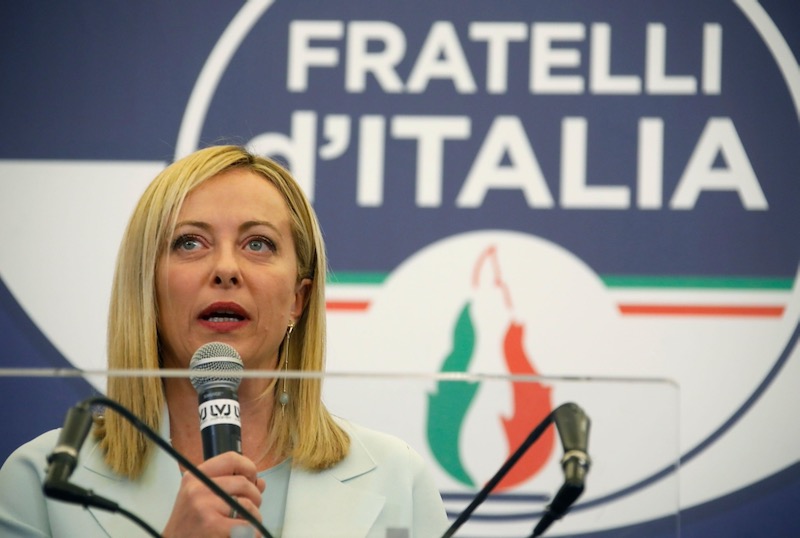 President of the Brothers of Italy Giorgia Meloni at the end of the electoral round that saw her victorious against the Centre Left.
Independent Photo Agency/Alamy Live News

Giorgia Meloni, leader of Italy’s right-wing Brothers of Italy party, is on course to become Italy’s first female prime minister after her party won a decisive victory in Sunday’s election. The Brothers won more than a quarter of the vote, up from just 4 per cent in 2018, and were well placed to lead a coalition with Matteo Salvini’s Nationalist League, and former premier Silvio Berlusconi’s Forza Italia. Votes for the other two parties brought the right-wing coalition total to just over 43 per cent of the vote.

The final turnout was 64 per cent, significantly below the previous record low of 73 per cent in 2018.Born in Rome on 15 January 1977, Meloni was brought up in the working-class neighbourhood of Garbatella by her mother, after her father left them.

Brothers of Italy grew out of the country's post-fascist movement, but Meloni has sought to distance herself from the past, while refusing to renounce it entirely. In her victory speech on Monday, she pledged her party would govern for everyone and would not betray the people’s trust.

In terms of her policies, she has firmly staked out ground against immigration and “LGBT lobbies”, and in favour of traditional Catholic and Christian values.

“I am Giorgia, I am a woman, I am a mother, I am Italian, I am Christian,” she famously declared at a 2019 rally in Rome that went viral.

Her anti-immigration stance appears not to have endeared her to Pope Francis. On the day of the election – which also happened to be the World Day of Migrants and Refugees – Francis said: “Migrants are to be welcomed, accompanied, promoted and integrated.” Clearly not all Italians agree.

Meloni has said she has failed at times to understand Pope Francis. In her autobiography, she called St John Paul II “the greatest pope of the modern era” and “a saint”. Speaking of Francis, she said: “Even though I’m Catholic and I’ve never allowed myself to criticise a pope, I admit that I haven’t always understood Pope Francis.” In 2020, she said, “I’m a believer and I listen to the words of His Holiness, but on a political level I don’t always share them.”

On the issue of abortion, she says she will maintain Italy’s abortion law, which allows terminations but permits doctors to refuse to carry them out. However, she says she wants to “give to women who think abortion is their only choice the right to make a  make a different choice”.