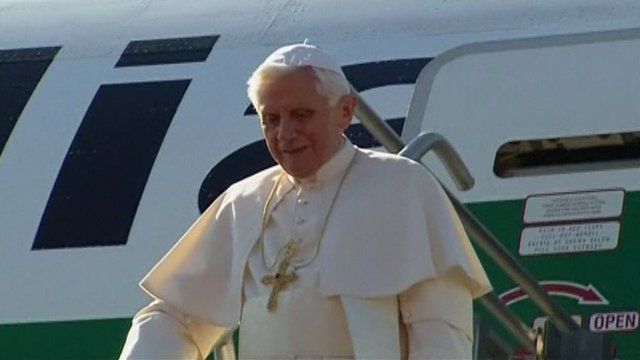 Pope Benedict XVI has arrived in Mexico, at the start of his first visit to Spanish-speaking Latin-America.

The Pope was greeted by thousands in central city of Guanajuato, and welcomed by President Felipe Calderon.

Mr Calderon said the visit had enormous importance as Mexico was suffering greatly from drug-related violence.

Before his arrival, the Pope said it was vital "to fight this evil" and urged the young to renounce drugs. After Mexico, he will travel to Cuba.

He said Marxism there was no longer working.

The Pope said the ideology no longer corresponded to reality and called for "new models" to be found.

He made it clear that "the Church is always on the side of freedom of thought and of religion".

Benedict was welcomed by cheering crowds at Guanajuato on Friday. Supporters at the airport chanted: "Benedict, brother, you are now Mexican!"

The pontiff then led a short blessing on a specially erected platform within the airport.

But it was on the streets outside where Benedict was most eagerly awaited, the BBC's Will Grant in Mexico reports. 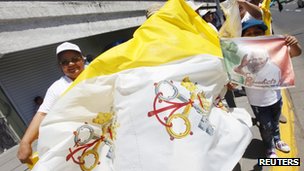 All day under a hot sun, thousands of cheering followers - dressed in white and yellow T-shirts and waving flags - lined the route to the city of Leon to catch a glimpse of Benedict as he passed in the armour-plated Popemobile.

Our correspondent says security is tight - with the federal police and military deployed in large numbers.

The Pope is due to hold talks with President Calderon later on Saturday.

He will also spend time in the city of Silao, near Leon.

On Sunday some 300,000 people are expected to attend Mass, and huge camp sites have been set up to give pilgrims somewhere to stay.

Earlier, while on route to Mexico, Pope Benedict told journalists: "I share Mexicans' joy and hope but also their anguish and grief," referring to the country's drug related violence, which has taken 50,000 lives in the past five years.

One Mexican supporter said: "With this wave of violence that we're living, not just in individual states but across the country, the Pope's visit could be a great source of comfort." 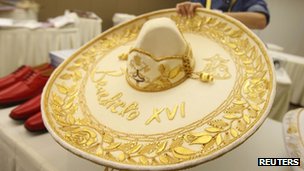 The Pope will be given a charro hat in Leon

Some 88% of Mexicans - almost 100 million people - are Roman Catholic, and the Pope's predecessor, John Paul II, was a regular visitor to the country.

Our correspondent says Pope Benedict is not regarded with the same affection yet, but there is undoubtedly excitement about the visit among the faithful.

This week the campaign group Amnesty International reported that life was getting harder for dissidents there.

Earlier this month, activists were evicted from a church they had occupied in the capital, Havana, demanding an audience with the Pope.

In Havana, Cuban Foreign Minister Bruno Rodriguez said the government was open to opinions that differed from its own, in a reference to the Pope's comments that Marxism there was no longer working.