Mexico, Two Jesuits Killed in Church while Defending a Parishioner 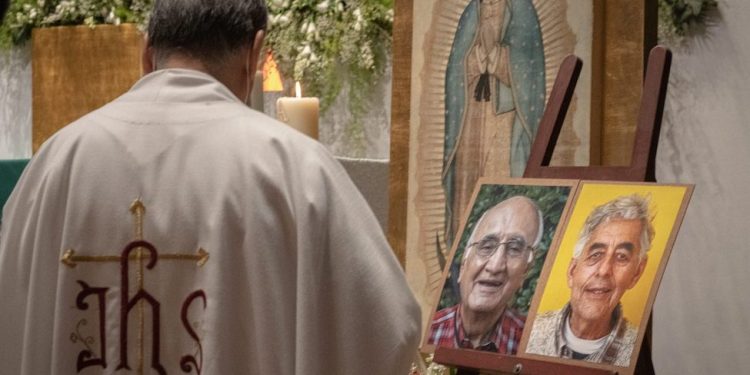 Two Jesuit priests, Father Javier Campos Morales and Father Joaquín César Mora Salazar, were killed on Monday, June 20, in Mexico, in the church of Cerocahui, a remote village in the Sierra Tarahumara in the northern state of Chihuahua. The two religious are said to have attempted to give refuge in the local community church to a parishioner being pursued by a gunman, who then opened fire in the sacred place, killing all three people.

Fr. Luis Gerardo Moro Madrid, Father Provincial of the Mexican Province of the Society of Jesus, announced the deaths the following day.[1] His brief message was then followed by a hard, dramatic communiqué with which the Mexican Jesuits, in addition to condemning the incident, ask that “all protective measures be taken immediately to safeguard the lives of our Jesuit brothers, sisters, lay people and the entire community of Cerocahui.”

The Mexican Jesuits condemned the killings to make known “the pain felt by our people because of the prevailing violence and in solidarity with so many people who suffer the same situation, without their suffering attracting the solidarity and attention of public opinion.” This solidarity and closeness with the people was also witnessed and confirmed by the first reactions on social media by brother Jesuits, citizens and parishioners of Cerocahui.

Acts such as these are not isolated. As the statement from the Society of Jesus itself explains, “the Sierra Tarahumara, like many other regions of the country, has to deal with conditions of violence and abandonment” to which the Mexican authorities seem to continue to fail to respond, and to which public opinion is largely indifferent as well.

In her reconstruction for the Italian daily Avvenire, the correspondent for Latin America, Lucia Capuzzi, recalls that in recent decades the Sierra has been invaded and taken over by the narcos. This is both because the area is a strategic corridor for transporting drugs to the other side of the border, and because the deep and inaccessible gorges of the Sierra are perfect for planting marijuana, thus forcing the local indigenous people off the land. According to Capuzzi, this was not the first time the two Jesuits had been threatened.

The hard and simple communication of the Mexican Jesuits was immediately echoed by the shock and sadness of Fr. Arturo Sosa, the Superior General of the Society of Jesus, who also called for a halt to “so much unnecessary suffering.”

There then followed messages of condemnation from the Mexican president, Andrés Manuel López Obrador, from the governor of Chihuahua, María Eugenia Campos, and from the Mexican Episcopal Conference. The Ibero-American University of Mexico City (IBERO), linked to the Society of Jesus, and the United Nations High Commissioner for Refugees (UNHCR) were among those who sent communiqués of solidarity, expressing their grave concern about the murders.

“So many killings in Mexico!” said Pope Francis, expressing his sorrow for his two confreres and the layman who were killed, at his customary weekly Wednesday General audience, in order to be close to the local Christian community affected by this dramatic event.

Who were the two Jesuits killed?