Mother Teresa – the roots of a saint 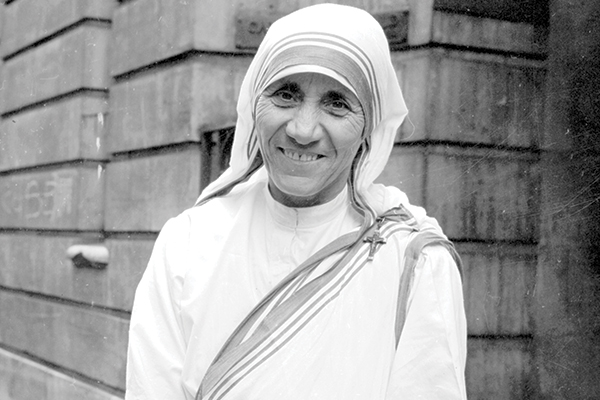 Mother Teresa was always clear about her identity as an Albanian-born Roman Catholic. But her near-silence about her family and private life was partly to block a painful memory

“By blood and origin I am all Albanian. My citizenship is Indian. I am a Catholic nun. As to my calling, I belong to the whole world. As to my heart, I belong entirely to the heart of Jesus.”

Mother Teresa’s speech to the world media in Oslo after she had collected the Nobel Peace Prize in December 1979 was a rare acknowledgement of her ethnic background. In his book about her, Malcom Muggeridge hastily concluded that “the wholly dedicated like Mother Teresa do not have biographies” because “biographically speaking, nothing happens to them.” Mother Teresa herself is partially responsible for the superficial treatment of her background in her many biographies. Some have argued that her lifelong reticence about what she would call “private matters” was simply because she wished to attribute her achievements to God alone, and to deflect attention away from herself and her own story towards those who mattered most to her: the poor.

But there is more to the story of what led a young Albanian girl from Skopje into becoming one of the most loved and most hotly debated spiritual and humanitarian icons of modern times than self-imposed amnesia. While Mother Teresa – canonised on 4 September 2016 – was unaware of several things about her roots, all the indications are that she was a proud, albeit silent, Albanian. But her primary identity was “Christian”, and she understood this identity not as exclusivist or divisive but as all-encompassing and harmonious. For her, each person is loved by God, is precious and is of equal dignity. This was the only category of “person” that she felt she truly belonged to.

Gonxhe Agnes Bojaxhiu was born in Skopje (now the capital of North Macedonia, then part of the Kosovo vilayet of the Ottoman Empire), on 26 August 1910. She was the third child of Nikollë and Drandafile (also known as Roza) Bojaxhiu; a sister, Age (Agatha), had been born in 1906, and a brother, Lazar, in 1908. The young Gonxhe’s’ life was turned upside down at the age of nine, when in 1919 her father died a painful death from poisoning. This was most likely a political assassination carried out by Slav nationalists keen to eliminate “incorrigible” Albanian patriots opposed to the annexation of Albanian territories by the Kingdom of Yugoslavia. This had been set up in 1918, and plans had been hatched at the Paris Peace Conference to eliminate the young Albanian state that had emerged following the declaration of independence in 1912.

The claim that the Yugoslavs were implicated in Nikollë’s murder were first made public by Mother Teresa’s brother, Lazar, in 1979. Despite his insistence that she speak out about this and discrimination against Albanians across the Yugoslav federation, Mother Teresa maintained her silence till her death on 5 September 1997. Though she knew that Enver Hoxha’s government in Albania had mistreated her mother and sister partly because of her growing fame, she remained equally reticent about the brutal persecution of Christians – including Catholic priests and faithful – in Albania throughout the period of communist rule.

The details surrounding the death of Mother Teresa’s father will probably always remain murky. But her life-long silence about her father’s death was also partly a determination to block a deeply painful memory. By her own admission, her father “remained” with her forever. I believe she never recovered from this inconsolable loss. Even if she had been sure that Serbian nationalists were behind her father’s murder, Mother Teresa would still not have condemned the killers. Forgiveness was fundamental to her. And her silence was also dictated by her loyalty to the Vatican. Knowing how important she had increasingly become to the Church following the foundation of her Missionaries of Charity in 1950, and her growing international profile, especially in the wake of the Nobel Peace Prize, Mother Teresa was aware that any loose remark from her on Balkan politics could have repercussions for the Vatican’s sensitive relations with Yugoslavia, and with the Serbs in particular.

But I have learnt that Mother Teresa chose to ignore the subject of her father’s death for another reason. Shortly after he was murdered, nine-year-old Gonxhe lost her maternal uncle, Mark, and six members of his family, who had lived close by the family home in Skopje. They all died in the Spanish flu pandemic which raged between 1918 and 1920. The only person to survive from her uncle’s family was six-year-old Filomena, who was adopted by Mother Teresa’s mother, Roza. Filomena became Gonxhe’s closest friend. They shared the same bedroom in the family home until 1928, when Gonxhe left Skopje to travel to Dublin to join the Sisters of Loreto at Loreto Abbey in Rathfarnham. After six weeks she embarked on a long voyage to India to fulfil her dream of becoming a missionary. She arrived in Kolkata in 1929.

Mother Teresa did not see Filomena again for 41 years, when they met in 1969 in Melbourne, where Filomena had been living with her family since 1952. After that, the two cousins stayed in touch until Filomena’s death in 1979. Filomena’s children and grandchildren shared with me during two visits to Australia in 2011 and 2013 what she had told them about her life with her beloved cousin Gonxhe in Skopje. Filomena’s recollections, even at second hand, fill several gaps in the story of Mother Teresa’s childhood and teenage years. They are especially important in understanding the impact of bereavement on her calling.

Mother Teresa lost her maternal grandmother Drane in 1922. In less than three years she had lost nine people very dear to her. It was in this same year that she received what she called the “first call” from God. It was at this time of grief and loss that Mother Teresa grew increasingly attached to Jesus, and it is not unreasonable to speculate that he became an omniscient surrogate paternal authority to her. The mourning may also have triggered a lifelong “dark night of the soul”. Her decision to become a missionary and the choice of India as a destination were motivated by the desire to serve Jesus by assisting “the poorest of the poor”. This life-changing decision was by her own admission undertaken primarily “for the sake of her soul”.
The depth of Mother Teresa’s spiritual darkness was revealed when Mother Teresa: Come Be My Light: The revealing private writings of the Saint of Calcutta was published in 2007. These very personal diaries and letters suggest that the seeds of her lifelong spiritual aridity were sown during the formative years in Skopje. Mother Teresa would talk about her dark night of the soul only to her spiritual advisors; as her public profile grew she became increasingly unwilling to discuss it.

Mother Teresa’s reluctance to talk about her painful childhood is understandable; her near-silence about her ancestors, especially on her mother’s side, reflects how little she knew about them. She was annoyed when Malcolm Muggeridge wrote in 1971 that “she comes of peasant stock”. She became more sensitive to remarks regarding her rustic roots as her fame grew, sometimes expressing her displeasure at this “misrepresentation”. Asked by her friend and biographer Eileen Egan in 1986 if “her people had been mountain people”, she had retorted: “No, they were not. As far as we can know, they were city people. They say that we were peasants, but that is not true.”

Mother Teresa was right about her paternal relatives, who had lived for generations in the city of Prizren in Kosovo. On her mother’s side, however, her ancestors were of peasant origin. They were originally from Mirdita in Albania, arriving in Kosovo in search of a better life around the middle of the nineteenth century, an example of Albanian internal migration traceable since Illyrian antiquity. Cases of forced evictions of Albanians from their lands were recorded throughout the Ottoman rule, sometimes carried out with the help of the Albanians’ Slavic neighbours. A significant number of the people driven out were relocated in neighbouring Albanian territories, including regions in present-day Albania like Puka, Tropoja and Mirdita. This is one of the reasons why family connections between the population of these regions with Kosovo, especially its southwestern part, Dukagjin, were maintained for centuries.

This ancient connection explains why the Bardhis, Mother Teresa’s maternal ancestors, moved to Gjakova, which is part of the Dukagjin region in Kosovo. I have traced their involvement in the blood feud phenomenon: at least three members of the family, including Mother Teresa’s grandfather, lost their lives for vendetta-related reasons. In the wake of her husband’s death, Mother Teresa’s grandmother Drane and her two young children – her daughter Roza (Mother Teresa’s mother) and Mark (her uncle) – left the region of Gjakova and relocated in Skopje. Once they arrived there, Drane changed the family name and never mentioned her husband to the two little children. Mother Teresa grew up never hearing anything about her maternal grandfather or other paternal relatives. The only people she knew on her mother’s side were Mark and his family, all of whom except her grandmother Drane and cousin Filomena perished during the pandemic.

In the lives of the saints, as in the lives of all celebrity-heroes, what the protagonists would prefer not to be known about them – and what they themselves are unaware of – is sometimes the key to understanding what drove them to achieve remarkable things.

Gëzim Alpion lectures in sociology at the University of Birmingham. Mother Teresa: The Saint and Her Nation is published this week by Bloomsbury Academic at £85 (Tablet price £76.50).