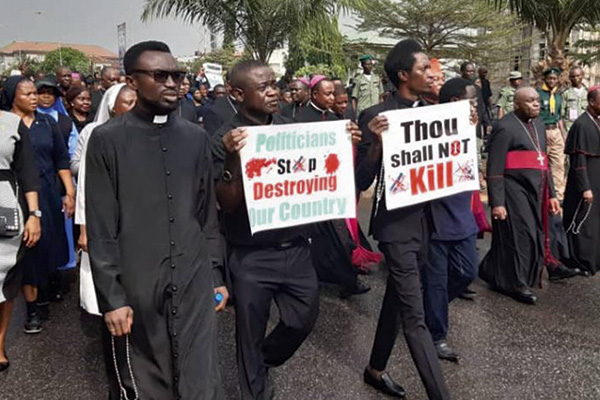 Bishops and clergy in Abuja lead a peaceful protest march against extremism on Sunday
Photo: Aid to the Church in need

Nigeria’s bishops have launched peaceful protests against the ‘brutal killing of innocent Nigerians’. Two prominent Nigerian Catholics argue that the root of the current spate of killings is not religious difference but the cynical manipulation of Islam by a corrupt elite

Two isolated events recently took place in two different locations in Nigeria. They appear unconnected, but each speaks to the distorted political and social landscape that has turned Nigeria into a place of fear and terror.

On 1 February, a Catholic seminarian, Michael Nnadi, was brutally murdered in the inner recesses of the dark forests along the now infamous Abuja-Kaduna road. Two days earlier a milder drama had played out in the Federal House of Representatives in Abuja. There, Alhassan Ado Garba, popularly known as Alhassan Doguwa, turned the hallowed chamber into a theatre of the absurd. He introduced his four wives to his fellow representatives, declaring that he had transported the women all the way from Maiduguri, the epicentre of Boko Haram attacks, to Abuja to meet them. “You call me a powerful man in this House,” he told them, “but I want to prove to you that I am also powerful at home. These my four wives have produced 27 children for me and I am still counting.”

Nigeria’s protracted history of violence can only be understood against the backdrop of very different trajectories. Although the media focus is often on sharp fault lines between Christians and Muslims, the issues at the root of the conflicts that are disfiguring the nation are more complex, and are buried in the womb of its convoluted history.

In his book Emirs, Evangelicals & Empire, written forty years ago, when he was teaching in the history department of Ahmadu Bello University in Zaria, northern Nigeria, and recently made available online, Ian Linden gives a masterful historical account of the conflict between missionaries in Northern Nigeria and British colonial officers. Although the story is woven around the life of Walter Miller, a remarkable English missionary, it opens a window to the culture of conflict that has been built into Christian-Muslim relations in Nigeria not just for decades, but for centuries.

When we speak about “Christians” and “Muslims” in Nigeria, we often neglect the hugely complex issues of language, ethnicity, ideology and social class that underlie these two identities. Although northern Islam presents a face of uniformity, the dominant Sunni and Hausa-Fulani identities hide the tensions that exist within the major Sufi brotherhoods (the Tijaniyya and the Qadiriyya), and between them and various Shi’ite groups, who constitute significant and growing minorities. These tensions mark economic cleavages and influence political loyalties. There are also the sometimes ignored Yoruba Muslims of the south-west, moderate, pacific and often highly educated.
Although ethnic, denominational and class differences and tensions exist among Nigeria’s Christians, they have rarely spilled over into violence. Indeed, the so-called “Christian-Muslim tensions” that emerged in the late-1980s and 1990s were a response to the pressures of oppressive and incompetent military rule, where religious affiliation became the most viable outlet for ventilating opposition to the generals and their allies. The domination of political power in this period by a northern Muslim cabal, and the inability or unwillingness of this ruling elite to encourage economic and social development, triggered resentment among many Nigerians, the Christians of the south in particular.

For Christians, the boorish behaviour of the northern Muslim member of the house of representatives exemplifies why the north and Islam are perceived as the source of crisis and conflict in Nigeria. They regard the north as a socially backward region, which scorns modernity and contributes next to nothing in taxes or resources to the national coffers. To them, Mr Dorungwa’s pride in his domestic arrangements and the size of his family is a metaphor for the crisis of illiteracy among young people – especially young women – in northern Nigeria and why a staggering 13 million children live on the streets.

Things have come to a head in the Presidency of Muhammadu Buhari, whose supremacist and divisive policies have pushed Nigeria to the brink. Buhari, a retired general who, after several failed attempts, was elected president in 2015 and re-elected a year ago, had always been seen as something of a religious bigot among non-Muslim Nigerians.

Even in the north, his appeal is largely to poorer communities, where illiteracy and poverty promotes messianic expectation of the return of the Caliphate, which the British overthrew in 1903. It is not difficult to understand why the killing of Osama Bin Laden might elicit a response that would lead to the killing of Christians and destruction of their properties; it is easy to see why the killing of Islamic State leader Abu Bakr al-Baghdadi might lead to the beheading of 11 Christians on Christmas Day and the murder of the leader of the Christian Association of Nigeria (Can) by Boko Haram on 20 January.

Violence against Christians was fuelled in the past by the feeling that Christianity was wrapped up with colonisation, and was “Western” and alien. Sadly, the association with a secular West now poses an even bigger problem for Christianity in this age of global Islamist extremism. The circumstances that led to the gruesome murder of Michael Nnadi feed into this narrative of an anti-Christian culture that has become embedded in northern Islam. Christians are denied lands for places of worship, the systematic destruction of churches is ignored, Christians are denied jobs, representation and promotions in the state civil services, their children are denied scholarships, and Christian religious education is outlawed.

Muslim children are under the tutelage of poor and unlettered clerics who see secular democracy and all things Western as a threat to Islam. The children brought up and indoctrinated against Christianity, modernity, and democracy have become part of the army of Boko Haram and of other terrorist cells today. The name Boko Haram – literally, “Western education is forbidden” – defines this culture of resistance to progress and the empowerment of women.

Christians are facing grave persecution, especially in the North. Nigeria has become a land of terror, with Boko Haram, Islamic State West Africa (Isis-WA) and other terror cells – home-grown and global – spreading across the country. The lawlessness and bloodletting continues unabated because Nigeria is plagued by a federal government with a supremacist Islamist agenda, of a kind which has never been seen before. Today, in Nigeria, the noble religion of Islam has convulsed. Muslim scholars, traditional rulers and intellectuals cry out helplessly, asking for their religion and region to be freed from this chokehold.

Conflict in Nigeria cannot simply be reduced to the persecution of Christians by Muslims – the situation is much more complex, and not all the responsibility for the violence lies on one side of the divide – but this rising persecution is today the most visible manifestation of the worst aspects of our religious differences.

The key to the future is education – especially of the teeming youth population in the north, and especially of young women and girls. Unless all our children are taught the values of inclusion, of cultural and religious pluralism, not just of mutual tolerance and respect but of esteem for our different traditions, a multicultural Nigeria will never flourish, and Boko Haram’s abominable agenda will triumph. We must get our children into school. In the Diocese of Sokoto, our resources are severely lean, but we are committed to dialogue. We have a school in Sokoto in which the ratio of Muslim to Christian students is 80:20. Every day, I see in the faces of our children in our schools, Christian and Muslim, a flicker of hope for tomorrow.

Sadly, violence in Nigeria has spawned new phases, farmer-herder violence, banditry and now a culture of kidnapping that threatens the social fabric of the country. It is hoped that the international community can go beyond grandstanding and condemnation from the sidelines to concrete help.

Nigerians, Christian and Muslim, will pull through this. The crisis is the result of toxic politics. Over 90 per cent of Nigerians are the victims of the insatiable greed of a corrupt political elite. The Church must go beyond denunciations and build a wider coalition with Muslim and other leaders to bring the political establishment to the path of integrity. We all share a desire to know and embrace the truth; we all want to live beyond the self and to love beyond measure. This can only be achieved in a society that respects religious freedom and the primacy of conscience. Only by acting together can Christians and Muslims destroy the many demons which haunt our troubled land.

Matthew Hassan Kukah is the Bishop of Sokoto, a consultant to the Pontifical Council for Interreligious Dialogue and the founder of the Kukah Centre, a think tank devoted to promoting the Church’s role in public life in Nigeria and developing practices of inclusion in Christian-Muslim Relations; Stan Chu Ilo is professor of African Studies and World Christianity at the Center for World Catholicism and Inter-Cultural Theology, DePaul University, Chicago and Honorary Professor of Religion and Theology, Durham University.