On the trail of St John Henry Newman 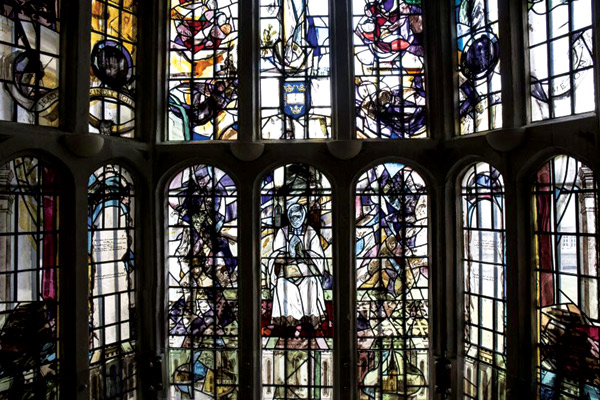 The stained glass window at Oriel College, Oxford,
depicting Newman with extracts from his work Photo:

Trinity College, Oxford
Newman was not yet 16 when he went up to Trinity; he was an undergraduate and scholar there from 1816 to 1822.
The chapel: Newman was confirmed and made his First Communion here, and kept a picture of its interior in his study at the Birmingham Oratory.
The hall: It was here that Newman ate his first dinner in Oxford and wrote home enthusiastically to his mother. He took his turn to read the Latin narrare from the double-headed dragon lectern, and he excelled in the internal examinations – “collections” – that took place in front of the tutors seated at High Table. To the right of the fireplace are portraits of Newman and of his tutor, Thomas Short.
The garden: A bust of Newman was presented to Trinity in 1916, on the centenary of his admission. It looks down the garden towards Wadham College – the view that Newman had from his windows when he was a scholar.
After his conversion, Newman stayed away from Oxford for more than 30 years, until in 1877 he was invited to become Trinity’s first ever Honorary Fellow.
Normal opening hours are 10:30 a.m. to 12 noon and then 1 p.m. to 4 p.m. To check that the college is open on a particular date, contact the lodge on 01865 279900.

Oriel College, Oxford
Newman was elected to a fellowship by examination at Oriel in 1822; two years later he was ordained and twice served as chaplain (1826-31 and 1833-35).
Above the entrance to the chapel is a small oriel that he is believed to have used for private prayer. When an organ was installed in 1884 the space was used for the blower. In 1991, it was restored to its prior use as an oratory and made into a memorial to Newman. In 2001, a new stained glass window was installed, depicting Newman with extracts from his work, his own handwriting reproduced on the glass.

Normal opening hours are 2 p.m. to 4 p.m. (subject to other events). Groups of six or more must book in advance by emailing chaplain@oriel.ox.ac.uk
Holy Trinity Church, Over Worton
The parish church in this hamlet in Oxfordshire, about seven miles south of Banbury, is where Newman preached his first sermon in 1824. In the 1820s Over Worton’s curate was the evangelical priest, Walter Mayers, Newman’s tutor when he was at Ealing School.
The church is open most days. For details, email clergy.bartonbenefice@outlook.com

The University Church of St Mary the Virgin, Oxford
Newman served as vicar of the University Church from 1828 to 1843. His spiritual influence on parishioners and members of the university so alarmed the head of Wadham College that he scheduled compulsory lectures on Sunday afternoons to prevent impressionable undergraduates from coming to St Mary’s.
The current vicar, William Lamb, says: “Cardinal Newman became one of the great leaders of the Oxford Movement, which has done so much to renew the life and witness of the Church of England. We celebrate his legacy here not only as a great preacher, but also as a conscientious parish priest, who did so much to build up the church, placing the sacraments of the church at the heart of the Christian vocation, and caring for the poorest members of our community.”
Opening hours are Monday to Saturday 9.30 a.m. to 5 p.m.; Sunday 12 noon to 5 p.m
St Mary and St Nicholas Church, Littlemore
The village of Littlemore was a neglected part of his parish and Newman showed great pastoral concern for its inhabitants; he visited every dwelling and engaged in intense fundraising so it could have a church and a school of its own. The church was consecrated in 1836, 14 months after the foundation stone was laid by his mother, Jemima. A list of benefactors can be seen on the wall inside the entrance. When Newman preached his famous valedictory sermon, “The Parting of Friends”, here in 1843, “Dr Pusey and some others sobbed aloud”, according to an eyewitness, and “the sound of their weeping resounded throughout the church”.
The priest-in-charge, Margreet Armit­stead, is undertaking an ambitious project to improve the church’s facilities; the newly created space will be called the “Newman Meeting Place”. She says: “Newman had a pastoral heart for Littlemore. We hope the deepened interest in Newman will help us raise further funds so that we can better support the people of this area, one of the most deprived parts of Oxford.”
A cause of articular delight was the discovery that in his attempts to improve the bleak local landscape, Newman had planted a thousand trees. In later years he was able to write: “Littlemore is now green.”
Due to the refurbishment, the church will be closed until September 2020.

The College, Littlemore
A short distance from the church in Littlemore lay an old stable block that Newman converted into a group of cells with a kitchen and library. It served as a place of retreat where he lived with a small group of friends between 1842 and 1846. It was here that he was received into the Catholic Church by the Italian missionary priest, Blessed Dominic Barberi, on 9 October 1845. “Here it has been, that I have both been taught my way and received an answer to my prayers,” Newman wrote in 1846.
Religious Sisters of the Society of The Work now look after The College. Pilgrims can visit Newman’s room and small chapel, which is similar to how it would have been when he and his companions prayed there, as well as the library, which includes a substantial collection of Newman-related literature, pictures, sculptures, original letters and objects. His writing desk, which was used as the altar at the first Catholic Mass he attended, celebrated by Bl. Dominic Barberi, is also on display.
For opening times and details of how to arrange a visit, go to www.newmanfriendsinternational.org

Maryvale, Old Oscott, Birmingham
After his Newman’s reception into the Church, Nicholas Wiseman, then the auxiliary bishop of theMidland District, offered him and his companions Old Oscott House, the original site of Oscott College, four miles from the centre of Birmingham. Newman moved there in February 1846, taking an upstairs room with a window looking down over the chapel. He wrote to a friend: “I am writing in the next room to the chapel. It is such an incomprehensible blessing to have Christ’s bodily presence in one’s house, within one’s walls, as swallows up all other privileges and destroys, or should destroy, every pain.”
Newman renamed his new home “Maryvale”; his pet name for it was “Sancta Maria in Valle”. The present high altar is the chapel altar at which Newman celebrated Mass. He founded the English Congregation of the Oratory here in 1848; after the papal bull was read, the community donned the Oratorian habit and processed into the chapel for Vespers.
Since 1980, Maryvale has been an Institute for Catechetics and Adult Education. The estates director, Anthony Jones, says: “After the canonisation we hope to establish a permanent exhibition of items associated with Newman, close to the chapel.”
Pilgrims are welcome to visit in daytime working hours. Groups by arrangement, call 0121 360 8118.
St Anne’s Church, Alcester Street, Birmingham
In October 1848 Newman left Maryvale for what turned out to be a brief stay in Staffordshire, before arriving in Birmingham. On 2 February 1849 Newman preached at the opening of the new Oratory in Alcester Street, Digbeth, on the edge of Birmingham city centre, which was to be his home for the next three years. Formerly a gin distillery, it was bought and fitted up as a chapel to accommodate 500 people. Destitute Irish, fleeing the famine, became Newman’s congregation.
The first Bishop of Birmingham, William Ullathorne, thanked Newman for his work here: “You could not contemplate so many souls in want of pastors without being prompt and ready at the beck of authority to strain all your efforts in coming to their help … the mission in Alcester Street, its church and schools, were the first work of the Birmingham Oratory.” Ullathorne noted Newman’s personal readiness to risk danger by ministering to the people of Bilston during a cholera epidemic.
The present St Anne’s Church was opened in 1884 by Cardinal Manning. The old church – the former gin distillery – became a school (now demolished).
For Mass times and opening times, call 0121 772 2780.
The Oratory, Birmingham
In 1852 the Oratorians moved to their present location at Hagley Road, Edgbaston. Newman lived here until his death in 1890. The very few relics of him that remain are lovingly preserved in a modest casket in the Oratory Church, which has become his National Shrine. Following the canonisation, a new museum of relics and memorabilia is being opened in the Oratory House.
When commencing the building of the Oratory in Edgbaston, Newman had envisaged the construction of a basilica-sized church adjoining the community’s house, but during Newman’s lifetime they made do with a rather makeshift chapel, with a roof that had once crowned a disused factory. The current church was constructed between 1907 and 1910 to replace the original structure as a memorial to Newman.
Tens of thousands lined the streets near the Oratory for the passing of his funeral cortège. He was buried in the small cemetery at the Oratory Retreat on Rednal Hill. A plaque on the cloister wall reads, “Out of shadows and images into the truth.” Prior to his beatification in 2010 his grave was exhumed but found to be empty. Brass, wooden and cloth artefacts from his coffin were transferred to a relic casket in the Newman Shrine.The shrine is open when the church is open. For Mass times go to www.birminghamoratory.org.uk/mass-times/
A Newman pilgrimage walk is being developed by an Oxfordshire vicar, Dr Hugh White. It will be a nine-day trail from Oxford to Birmingham, again mirroring the journey undertaken in life by Newman. Visit www.newmanpilgrimage.org for details.
Newman’s London: A pilgrim handbook by Joanna Bogle and illustrated by Malgorzata Brykczynska (Gracewing) is an indispensable guide to the places in the capital associated with Newman: where he was born, where he grew up, and where he spent his childhood summers. Gracewing has also reissued Newman’s Oxford by Fr Jerome Bertam, which has many illustrations and a useful map.