It is especially encouraging to see how committed the next generation is to caring for our common home, says Bishop Arnold.. 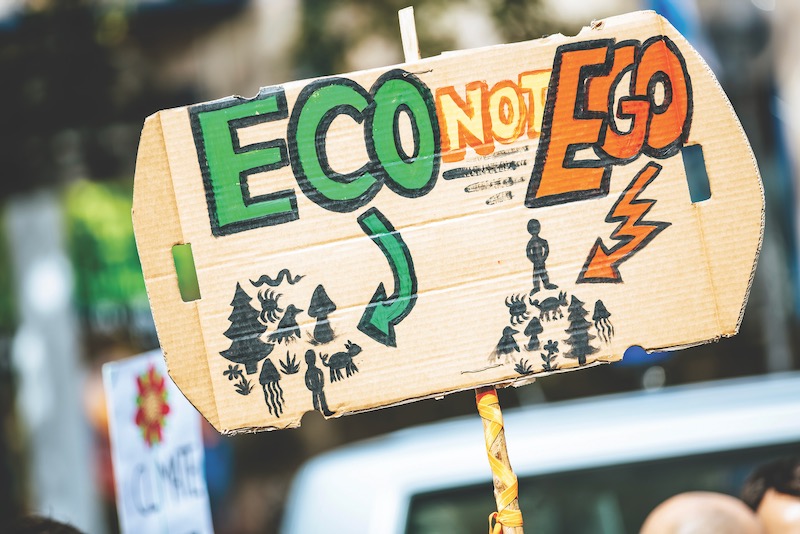 The environmental crisis is a spiritual crisis. If this generation is to leave a world where future generations can flourish, the head and heart, the local and global, the Churches and all people of goodwill must come together.

As Christians, we are taught to read the signs of the times. Who can fail to learn the lessons from the catastrophic floods in Pakistan? Can we argue any longer that the pattern of extreme weather events is merely a coincidence? We had got used to only seeing the impact of global warming on our television screens; this summer – when temperatures in Britain exceeded 40C for the first time and much of England was in drought – was surely our own wake-up call.

Our response might be to write to our MP or to go out on to the streets campaigning. These things are important. But first we should recognise that our ecological crisis is, at root, a spiritual crisis. The resolution of the ecological crisis needs us all to develop the right relationship with God’s Creation. Our hearts must be in the right place; we must act with determination, in our personal lives, within our parishes, and in the social and political realm.

The Bishops’ Conference of England and Wales’ new edition of The Call of Creation, released on Tuesday this week, points out that Catholic Social Teaching has linked human behaviour with the destruction of the environment for decades. In 1971, Pope Paul VI warned in Octogesima Adveniens that, “due to an ill-considered exploitation of nature, humanity runs the risk of destroying it and becoming in turn a victim of this degradation”. Eight years later, in his first encyclical, Redemptor Hominis, Pope John Paul II lamented that we were acting as a destroyer and exploiter of the environment rather than as master and guardian.

Now, 43 years on, who could say they were not prescient? We must respond. As Pope Francis wrote in Laudato Si’, we must develop a way of living that mends our broken relationship with the environment: “Once we start to think about the kind of world we are leaving to future generations, we look at things differently … Our difficulty in taking up this challenge seriously has much to do with an ethical and cultural decline which has accompanied the deterioration of the environment ... We see this in the crisis of family and social ties and the difficulties of recognising the other.”

We should make our own the old adage: “Everything is connected to everything else.” Even if humanity were not facing an urgent crisis, we should seek the right disposition towards the created environment; and if we are to live a rightly ordered life, we must learn to live simply. There is such a thing as “ecological sin”, which arises when we destroy or pollute the environment needlessly. But the Church also speaks of conversion, redemption and hope. We should grasp the desperate urgency of the situation that faces us, but we should not despair. With a change of heart, we will see care for the natural environment as an expression of praise for God’s Creation.

As Pope Francis writes: “We must not think that these efforts are not going to change the world. They benefit society, often unbeknown to us, for they call forth a goodness which, albeit unseen, inevitably tends to spread. Furthermore, such actions can restore our sense of self-esteem; they can enable us to live more fully and to feel that life on earth is worthwhile.”

But the Church cannot call on its members to change and not itself change. In March 2019, I wrote to schools and parishes across the Diocese of Salford encouraging them to play their part in responding to the ecological crisis. “Think global, act local,” I told them, emphasising the impact that small changes in our personal lives can have.

The response has been heartening. In the same letter, I announced plans to transform my home at Wardley Hall into the “Laudato Si Centre”. This flagship project acts as a focal point for our diocesan environmental journey, showcasing practical ways of living that better care for our common home that can be replicated in parishes, homes, and schools.

As I travel around the diocese, it is especially encouraging to see how committed the next generation is to caring for our common home. New initiatives in parishes and schools both educate people and help them take practical actions, conserving water and electricity, recycling, and making better travel and food selections. The “Guardians of Creation” project, a collaboration between St Mary’s University, the Laudato Si Research Institute at the University of Oxford and the Salford diocese, produces research and advice to help every diocese embark on its own decarbonisation journey.

This work is supported by the bishops, by Cafod, by the Tyndall Centre for Climate Change Research at the University of Manchester, and the Laudato Si Movement. However, local progress must be matched by national and global policies. Richer countries are responsible for the vast majority of carbon emissions. Poorer and middle-income countries must take action to reduce emissions growth if the key aim of keeping warming to 1.5C is to be met (let us remember warming has already increased to 1.2C), but richer countries have an urgent responsibility.

Pope Francis has taught us the value of “connectiveness”. Our response to the environmental crisis cannot be seen in isolation. We are publishing The Call of Creation while there is a brutal and tragic war in Europe and multiple conflicts elsewhere in the world. War is catastrophic not only for individuals and communities but for the natural environment. It diverts political energies away from the longer-term consequences of destructive human behaviour. But we cannot kick the can down the road. Our new government must take a global leadership role, not just in terms of action on climate change but also in working to create the conditions that favour peace. Without peace, there can be no true integral human development for all. Just as they did when Europe was rebuilt after the Second World War, all people of goodwill must work together if we are to create the kind of world we would like our children and grandchildren to inherit.