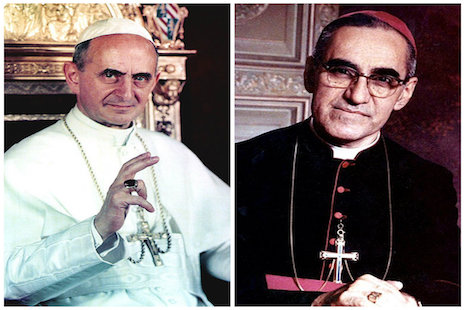 By announcing the canonization of Pope Paul VI and Archbishop Oscar Romero on the same day, Pope Francis wanted to draw a connection between two leading lights of the post-Council church: the pope who saw Vatican II through to its conclusion, and the bishop whose social actions at the heart of a Latin America torn apart by ideological conflicts stands out as one of the finest manifestations of the Council’s teaching.

For sure, the pope is calling attention to two men who deeply marked him throughout his Latin American past. Through his exhortation Evangelii Nuntiandi (On Evangelization in the Modern World), Pope Paul VI significantly influenced the 1979 Puebla meeting where Argentinean theologians, the “masters” of Bergoglio, put forward their own vision of liberation theology, giving substance to the preferential option for the poor. The very option for which Romero became one of the prophetic voices.

But when it makes saints of people, the church is above all highlighting the current relevance of those it puts forward as examples. And for Francis, neither Paul VI nor Oscar Romero are vestiges of the past.

Whether he speaks of “integral human development,” or criticizes “new forms of ideological colonization,” it is the pope of Populorum Progressio (On the Progression of Peoples) and Humanae Vitae (On the Regulation of Human Births) that he is directly referring to.

And when he talks of action in the existential peripheries, or of pastors "having the smell of their flock,” he is thinking of bishops like Romero — and others, like the Argentinian [Servant of God Enrique Ángel] Angelelli, who might also be beatified soon.

It is not surprising, therefore, that these two 20th century figures will be put forward as models to the youth of the 21st  century by being canonized, the first at the end of the Youth Synod in October, and the either at the same synod, or, more probably, during the World Youth Days in Panama, in January 2019.