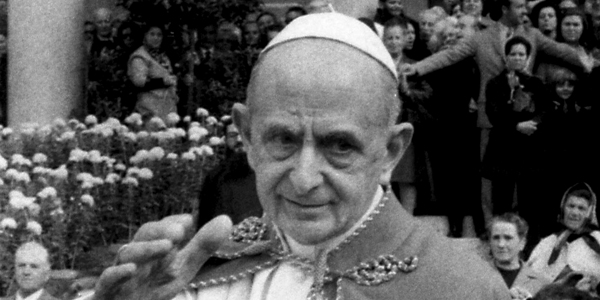 Although I am not particularly happy with the canonisation of popes until they have been dead at least 50 years, I am sure that St Pope Paul VI – as he will be proclaimed tomorrow – was a holy man. I met him, and felt it.

My father, George Speaight, better known for his books about toy theatres and Punch and Judy shows, had edited a glossy book on St Peter’s, and in 1969 his contact in the Vatican had arranged a brief audience for him and his family.

It had more than a touch of the royal court about it. The Pope sat higher than the four of us, on something like a throne; we all wore black; my mother and I covered our hair, our arms, our knees; we each kissed his ring. I expect the Pope found these customs imprisoning, rather more than we did; for us it was the pomp and elegance that celebrates a very special occasion.

I would have forgotten some of these details had they not been recorded by the official Vatican photographer, but the bit I will always remember is Pope Paul’s intense interest in us, his desire to know about our family – our names, our ages, our relationships – as though we were the first people he had been able to speak to for a month, not the umpteenth in a lengthy line-up of visitors over an afternoon. It was a little mirror of God’s personalised love, and that is holiness.

Oscar Romero: From inquisitor to saint; A martyr for our time

The four of us also went to the big public audience, which at that time still took place inside the basilica, with the Pope carried aloft on a sedia gestatoria. In the age of the popemobile this might seem overly regal, but it fulfilled the practical purpose of giving everyone in the crowd a splendid view. And Paul VI had already given up his tiara in a renunciation of human glory, dramatically laying it on the altar of St Peter’s, and no pope since has dared wear one.

What struck me again at the public audience was how eager he was to meet people, to touch their hands, to look into their eyes, to meet someone else, and someone else, until he was almost dragged away.

In Paul VI: The First Modern Pope, the biography written by my late husband Peter Hebblethwaite, we learn that the Pope had penned a private note just six weeks after his election that sheds some light on this frantic eagerness to connect with people. His new role, he said, “brings great solitude. I was solitary before, but now my solitariness becomes complete and awesome. Hence the dizziness, the vertigo. Like a statue on a plinth – that is how I live now.”

But Papa Montini, to give him the name the Italians prefer, is considered to be one of the less successful of twentieth-century popes, although there had been every reasonable expectation that he might turn out the best of them. We were in the era when a non-Italian pope was unthinkable, and Montini was pre-eminent among his Italian peers in intelligence, critical thinking, and, yes, sheer Christian goodness.

Pope Pius XII had been fully aware of his abilities, and he seems to have denied him a cardinal’s hat only in order to prevent him becoming his successor, perhaps considering him too liberal in his dealings with the Christian Democrats. Instead, the 1958 conclave voted in Angelo Roncalli, who said he would have voted for Montini had he been a cardinal. Roncalli made Montini the first cardinal of his pontificate.

After the death of John XXIII, Giovanni Battista Montini was elected Pope in the 1963 conclave at 65, the age that most people retire. He seemed to be everything that an educated, forward-looking Catholic of the day could hope for. He was well read, highly cultured and apparently progressive. He spoke and wrote fluent French, and when appointed Archbishop of Milan in 1954 he took with him a library of 8,000 books. One of his most important but overlooked legacies was the modern religious art he was to acquire for the Vatican – including Giacomo Manzú’s bronze doors to St Peter’s, and the pastoral staff carried by every subsequent Pope.

Only six days after being elected he announced that the Second Vatican Council would resume, and he presided over a further three sessions, resulting in declarations on church reform, Christian unity, the relationship of the Church with the Jewish people, and dialogue with the modern world that set a new direction for the Church.

Why then is Paul VI often considered an unsuccessful pope? It was a question of what the Italians call amletismo, that is, a Hamlet-like quality of indecision. Nothing contributed more to that perception than the debacle of Humanae Vitae, after which he never dared write another encyclical. It came out in 1968. Catholics had been led to expect a change in the traditional teaching against contraception, and it was received as a betrayal of expectations. Overruling the commission set up to advise him, Pope Paul states baldly that “in moral as well as in dogmatic theology all should obey the magisterium of the Church”.

While “natural” methods of avoiding pregnancy were approved, any act “which impairs the capacity to transmit life” frustrates God’s design, and was deemed “repugnant to the nature of man and of woman”. Pope Paul conceded that his teaching was “difficult”

but “husbands and wives should take up the burden appointed to them, willingly”, experiencing “the sweetness of the yoke of Christ”. There is a reflection here of Montini’s own personal spirituality, his experience of suffering as a route to holiness.

Paul asked Catholics to “consider how easily [the use of artificial methods of birth control] could open wide the way for marital infidelity and a general lowering of moral standards” especially for “the young, who are so exposed to temptation”. My husband Peter applauded Paul VI for his foresight. Catholic of the day thought they were only talking about married  couples, but Paul VI correctly anticipated that safe contraception would lead to a fundamental and irreversible change in sexual behaviour.

I was 17 when Humanae Vitae struck, and I will never forget the shock. Even at that age I realised that telling couples that the use of the Pill or other means of contraception in any circumstances was sinful could only result in a diminution of the authority of the papacy. That has happened, and is no bad thing. I met Peter (then a Jesuit priest and the editor of The Month) a couple of weeks later at a conference, and he was agonising in private over whether he had been courageous and honest enough, as he saw priest friends suspended for speaking against Humanae Vitae, while his editorial had been Jesuitical enough to avoid censure.

Peter had been at the first session of the Council in 1962. It had been his first venture as a journalist, and he was steeped in the hopes and excitement of a Church that was coming out to meet the modern world. To me, as a young person enthused by the talk of aggiornamento, Montini’s 15-year papacy felt like a lifetime. Once we have a new pope, I thought, the brakes can come off and we can get on with implementing the Council. Little did I know that 1978 would bring a 27-year papacy with more brakes.

There were five years before Humanae Vitae, during which most of Montini’s great reforms were made. He reformed the Curia, established a new Council for Interreligious Dialogue, and in his first encyclical Ecclesiam Suam committed the Church to dialogue with other religions and with the world at large. He brought the Council to a successful finish; he established the Synod of Bishops as a permanent way of living out collegiality and – it was hoped – curbing the control of the Curia; he said that bishops should offer their resignation at 75, and that cardinals could no longer vote in conclaves after 80.

He signed the Catholic-Orthodox Joint Declaration and made overtures to the World Council of Churches. And in 1966 he met the Archbishop of Canterbury, Michael Ramsey, who he considered as the leader of our “beloved sister Church”, famously slipping his ring on to Ramsey’s finger, leaving him in tears. I remember my own hopes for rapid steps to Christian unity as I watched coverage of this meeting on the school television.

Four of Paul’s unprecedented six foreign visits were made before 1968, earning him the tag of “the Pilgrim Pope”, until his travelling record was far surpassed by John Paul II. Peter would often recount the deep impression Paul VI had made at the United Nations as he pleaded with them (at the height of the Vietnam War): “Jamais plus la guerre! Jamais plus la guerre!” (Never, never again let us have war!). His groundbreaking 1967 encyclical Populorum Progressio, called “development” the “new name for peace”.

It is not that Paul VI did nothing good in the years after Humanae Vitae until his death in 1978, but there was much less of it. Even the new Order of Mass, which Peter thought was possibly his greatest legacy, was prepared before Humanae Vitae, though signed off three months afterwards. Pope Paul’s energy had gone, self-doubt had set in, and he communicated anxiety – amletismo, in short.

He alluded to that in a private note in the year of his death. “Am I Hamlet? Or Don Quixote? On the left? On the right?” His Jesuit confessor, Paolo Dezza, witnessed “how much he suffered for Christ and the Church”. Contrast that with the exuberance of three of his successors, John Paul I, John Paul II and Francis. Peter liked and respected Paul VI, and thought he had a “richer and deeper personality” than the more outgoing John XXIII, but he wondered if “maybe he became pope too late in life and lived far too long”.

Paul’s legacy is a mixed one. “He shrank from hurting people,” Peter observed, but compromises tend to leave both camps dissatisfied. For every step forward in committing the Church to social justice he seemed to take a step back in church reform. He travelled to Medellín, Colombia, in 1968 to support the groundbreaking meeting of Latin American bishops; but he also reaffirmed compulsory priestly celibacy. He appointed the visionary Paulo Evaristo Arns to be Archbishop of São Paulo, but he also forced the Jesuits to overturn a decision at the thirty-second General Congregation (by 228 votes to 8) to abolish the “grades” between Jesuits.

He recognised, in Octogesima Adveniens, that there are different kinds of socialism and not all are bad; but he ruled out women priests, even after the Biblical Commission had concluded that the New Testament evidence cannot settle the question. He promoted base communities in Evangelii Nuntiandi, but he also had the Congregation for the Doctrine of the Faith declare homosexual acts to be “necessarily and essentially disordered”. I am not sure I can say with hand on heart that I think Paul VI was a good Pope. But a good man, a holy man, a man who shared Christ’s agony, yes, hand on heart.

Peter owed to Pope Paul a more personal debt. He was dispensed from celibacy and the priestly ministry, which allowed us to marry in the eyes of the Church. Only a few years later, dispensations for priests seeking to marry stopped with John Paul II. It did not seem to deter any priest from marrying outside the Church – it just made them suffer more. Paul VI had not liked dispensations either – calling such priests “runaway brethren” who had “deserted and scandalised” their communities – but he gave them, with suffering. For that act of compassion both Peter and I will be forever grateful.

Margaret Hebblethwaite is a former assistant editor of The Tablet.